"I am not a writer, I am an atmosphere," Lúcio Cardoso quipped. Brazilian, gay, and by all accounts larger than life.

And this book is some kind of atmosphere.

Chronicle of the Murdered House, by Lúcio Cardoso, did not at first appear to be the kind of book I would enjoy. But what is bookclub for if not to push me to appreciate books I might not otherwise pick up? 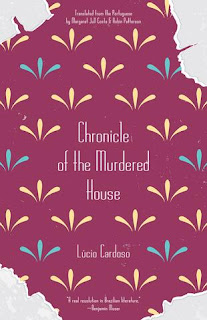 The first strike against it: it's long, almost 600 pages, which I think is a little much for bookclub to demand of me.

Second, a quick scan showed it to be epistolary in nature: a collection of letters, diary entries, confessions, et cetera. Not really my thing. I find it hard to keep track sometimes of who's writing and when; I expect the author/narrator to ensure the entries are suitably "curated" — such a novel demands a strong framework (I hold it to higher standard than a "traditional" novel, and so it more likely to fare poorly).

Third, there's something florid about it. The framework contributes to the sense that this book is much older than its 60-odd years. The language is dense and musty. It feels altogether of another era.

But bookclub. What else did I have to do in the deep cold of winter?

And wow. A mere five pages in, there's a spectacular reveal. André in his diary is questioning the meaning of it all — love, life, death — and mourning his lover, Nina, a paragon of beauty and life struck down too young (although in these early pages it's not clear whether by illness or something more nefarious). It's overly sentimental. André is highly dramatic (it's not till much later that we learn he is only 16 years old).

SPOILER:
On the fifth page, he clearly identifies Nina as his mother.

Oh, the melodrama, the scandal, the sin. Chronicle of the Murdered House is a love story, a tragedy, a family drama, a morality tale, a mystery, and a horror story.

This is the story of Nina and her effect on the Meneses family (I started pronouncing them the "menaces"). When Valdo, the youngest of three brothers, brings home a young wife (well, she arrives separately), the reader anticipates a breath of fresh air, to stir up some dust in this proud family. But I was not prepared for this.

The title is inspired and it serves the story well.

Curiosity #1: The house of the title. 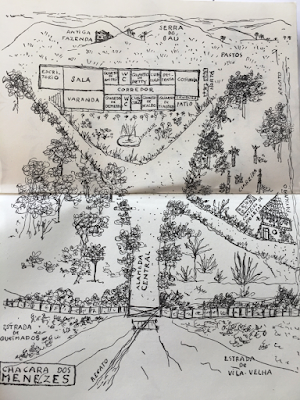 The title highlights a gothic element — indeed, the Chácara, the historic family home, is a strong character. The house is dim and stuffy, preserving bygone traditions. It has an army of servants. It has its own generator, with flickering yellow lights. It overlooks what was once an impressive garden, with a pavilion. The house is gradually falling into disrepair. By novel's end it is crumbling, "an abandoned skeleton." The house of course represents the family name.

"What do you think a house ruled by the power of evil is like?" (I skated clumsily over those words — the power of evil — ignoring their poverty and vulgarity.) "It is constructed very much like this one, firm in its foundations, secure in its traditions, conscious of the heavy responsibility of its name. It isn't tradition that takes root in it, it is tradition as the sole defense of truth." [...]

"It is what we could call a solidly built home." (I could not help noticing that my voice had become singularly calm.) "There is not a single crack through which heaven can enter." [...]

"Often, in times gone by," — it was my turn now to confess — "I wondered what made this house so cold, so soulless. And it was then that I discovered the formidable immutability of its walls, the frozen tranquility of its inhabitants. Ah, my friend, trust me when I tell you there is nothing more diabolical than certainty. In certainty there is no place for love. Everything that is solid and firm is a denial of love." (p 334)

With Nina's death, the windows are finally flung open.

Curiosity #2: The murder of the title.
I won't tell you who dies. Well, yes, the house — both that which physically stands and the family that presided over the land — dies. But the title supports the framework, establishing the novel as a mystery. The book is a compilation of accounts, of witness testimony, regarding certain events. (It is not revealed till the end who has gathered these documents together.) While the accounts are not obviously contradictory, they occur in different personal contexts, they focus on different aspects, they are imbued with different emotions. All of this raises the question of absolute truth. While there is no clear murder mystery as the book progresses, the structure sets up the reader to believe there is one.

Curiosity #3: The epigraph.
John 11:39-40. It links the smell of disease and decay to resurrection, or the absence thereof. Toward Nina's end, the stink is unbearable. I read with wrinkled nose. So there is no salvation in this house. "Christ is nothing but a lie" (p 573).

Curiosity #4: The summoning of the monster.
There's a scene I found utterly monstrous, horrific, Lovecraftian. Nina's lover recounts how "down my fists and my fingers ran a liquid which was neither blood nor pus, but a thick, hot substance that dripped down as far as my elbows and gave off a foul unbearable smell," (p 468) like her rotting lifeforce. It's really weird and unpleasant, but not entirely out of place. Nina is a catalyst for something, allowing the true horror (of the house?!) to manifest itself.

When she first comes the Chácara, Nina is a breath of fresh air, but she's also trouble. (I picture Nina as Rita Hayworth's Gilda.) She's also very much a victim. As monstrous as her behaviour is, I can't help but feel sorry for her. She is a creature of her body, of sensuous pleasures — as she has no moral code, it's hard to condemn her for breaking one.

What is goodness? How could one judge or evaluate it when in the presence of a blind, impulsive being like her? [...]

Curiosity #5: Nina/Ana.
They are positive/negative. Nina is colour and life, Ana is dour and gray. Nina is spontaneity and impulse and laughter, Ana is deeply unhappy and deeply repressed. Ana feels the burden of sin deep in her soul. Nina drinks champagne.

Ana is married to the eldest Meneses brother, and she is one with the house. Her confessions (to an actual priest) constitute a significant portion of the testimony in this chronicle. She figures prominently enough that one may say the novel is the story of two women, a study in contrasts.

Curiosity #6: The buried family secrets.
Senhor Timóteo is the Meneses brother nobody speaks of. An obese, cross-dressing embarrassment, he is quite literally buried alive, condemned to his room to watch life pass him by from his window over the garden.

Then there's the great aunt, whose portrait was removed from the drawing room.

It was the face of a woman, there was not doubt about that, but so stern, so unemotional, so detached from any mean, everyday thoughts, that it was more like the face of a man — a man, moreover, utterly disillusioned with the vanities of this world. There was no promise of serenity, none of the greens and pinks that conceal barely suppressed laughter or the twinkle of a sudden burst of youthful spirit — no. Everything about that face was dense and mature. The colors were the grays of tamed passions and the ochers of contained violence. It wasn't the face of an old woman, but of a woman at the outer limits of herself, with nothing to cover herself but the truth itself, whose caustic effects might or might not be dangerous.

In 1959, Cardoso was giving gay culture a place in Brazilian literature.

Curiosity #7: The snake, the wolf, the revolver.
The snake completes the Biblical allegory of the garden. The wolf is an external unseen predator, possibly imagined, a false pretext for a revolver. I'm not sure what to make of the revolver.

Some jazz: "Chronicle of the Murdered House," Part 1 and Part 2, by Larry Nozero.


This post first appeared on Magnificent Octopus, please read the originial post: here
People also like
Why SEO Is The Next Big Thing in the Real Estate Industry
جمہوریت ڈرامہ
30 Cheap & High ROI Home Renovations (And 5 Costly DIY Mistakes)
Telegram Marketing solutions
It's Time To Rebuild
How to Lose Weight and Keep it off Permanently
The Benefits of Synthetic Epoxy Flooring
Work From Home Jobs
Make a list to help your journaling
how stress affects your skin and how to manage it