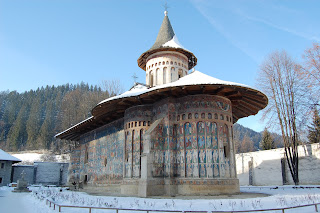 In 1488, the ruler Stephan the Great Built Voroneț Monastery.
It was built in less then four months, between May 26 and September 14 of the same year.

Is considered to be the ,,Sistine Chapel of the Orient”.

Furthermore -the blue of Voroneț- is considered by the specialists to be unique in the world.

Voroneţ was known for its school of calligraphy, where priests, monks and friars learned to read, write and translate religious texts.

The small windows, their Rectangular Frames of crossed rods and the receding pointed or shouldered arches of the interior doorframes are Gothic. The south and north doors of the exonarthex of 1547 have rectangular frames, which indicate a transition period from Gothic to Renaissance. But, above them, on each wall is a tall window with a flamboyant Gothic arch.