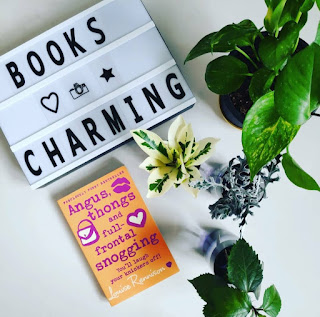 Book Review -
Angus, Thongs, and Full-Frontal Snogging by Louise Rennison is the first book in the series Confessions of Georgia Nicolson. The series has ten books in total, and I'm done with it by reading the first one. Unfortunately, the author died in 2016; may her soul rest in peace. She was bestowed as Queen of Teens in 2008 because her series is basically for teenagers and young adults.

Easy Pet Rocks Craft Idea For Kids
Robe portefeuille imprimée longue MAR…
The Sign of Four
10 of the best rural glamping hideawa…
Proven Methods for Successful Weight …
Now let's talk about this book - You'll Laugh Your Knickers Off is the subtitle, and I pick this book because of that. But sadly, there were only a few moments where I laugh, that too, not loud.
The protagonist Georgia Nicolson is a fourteen-year-old living with her parents and a younger sister. Of course, now, she is a teenager, and we all agree that they are dramatic; hormonal changes and all. But this one is the shittest teenage character I ever came across.
In the whole book, all she did was whining over her looks and boys. She is jealous of her friends, hates her parents, and wishes for their affair and death. She also has a cat that is wild and out of control. I think the author only put Angus in the story to make the book long. Georgia's friends and her love interest are shallow and fatally uninteresting, just like her.
The story is narrated by Georgia's POV, and all the time, I think, what the hell is her problem or how absurd the characters are behaving. Being an English author, Louise Rennison used many slangs and words that made me search for them on Google while reading. This book is considered an extraordinary funny bestseller, but it is utter nonsense and a waste of time and money.
If you still want to read it, then grab your copy from - Amazon IN Amazon US