Book Review - Maryada: Searching for Dharma in the Ramayana by Arshia Sattar 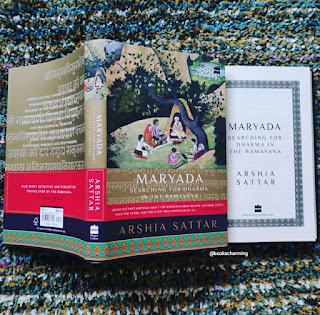 My Review -
Whenever I heard the name Ramayana, I remember how many times Rama wronged his wife, Sita, in the name of dharma (religion) or justice. In this Indian epic, many tales revolve around how Rama has become Maryada Purushottam and establish a new definition of dharma.

Shelby y Toni: La pareja lésbica de T…
Remote Learning Resources for the Fir…
Yoga is as Simple as Taking A Seat: C…
10 Facts you need to know about Diwal…
List Of Most Famous And Best Astrolog…
With time, these stories had been told numerous times, and the gist of dharma is lost in the way. A Kshatriya dharma is to kill while the sages are opposite. But many of the Indian philosophers kill whether it is for revenge or to protect themselves. When Rama was exiled for fourteen years, he didn't leave his bow and arrows, neither did Laxman.
When Sita tried to persuade Rama to live a life without the weapons, he responds that it is for their protection and continues with Kshatriya dharma. When Laxman told him to imprison Dasharatha, their father, for his foolish decision of sending him to the forest, he chooses different dharma altogether.
Maryada means limit in English, and the title of Maryada Purushottam (an ideal man) gives to a man who lives his life by a specific code. Rama is known for his calm nature, but in this book, I observed that he had his dilemmas and flashes of weakness, not to mention his impulses at certain moments. He accepts Dasharatha's decision but felt terrible that his father does all this because of a woman. This leads us to that Rama's father chooses his wife over his beloved son.
Dharma is intertwined with many factors, and what is right for one person seems to be wrong from another POV. The path is not clear, and the journey is bumpy; every sect has its rituals and ways of living, and when Rama with his wife and brother left Ayodhya, they entered into a whole new world of dharma.
In Lanka's Princess, I understand that Surpanakha was upfront towards Rama and Laxman for sexual relationships; that the brothers found amusing and surprising because where they came from, women didn't show their desires. So, they start teasing her, which leads to the attack on Sita, but the point is where Surpanakha came from it was all-natural; the rakshasas follow different dharma.
Maryada: Searching for Dharma in the Ramayana by Arshia Sattar is filled with these kinds of revelations. The author holds 35 years of experience in studying Valmiki Ramayana, and it shows in her writing. The only thing I don't like is the repetitiveness. The narration is in the form of discussion and analysis. The book works best for those who are studying Ramayana or open to have a new perspective towards Rama and the other characters of this epic.
Grab your copy from - Amazon IN Amazon US

10 Facts you need to know about Diwali

List Of Most Famous And Best Astrologers In Kolkata | N4M Survey

Fun Activities to do in Melaka

Book Review - Maryada: Searching for Dharma in the Ramayana by Arshia Sattar