Harry Potter and the Order of the Phoenix by J.K. Rowling 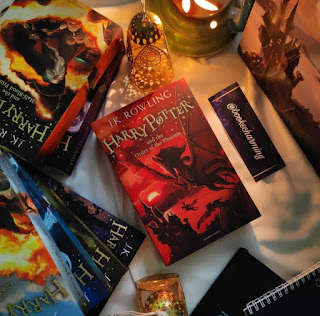 My Views -
The Order of the Phoenix is the longest Book in the whole Harry Potter series. It consists of 800 pages and took quite some time to finish reading it. I consider that the author needed to sketch Harry's wandering in his visions properly to make it more authentic that's why this book is so long.

5 Practical Tips on How to Use Social…
How To Make Sex Better In Long-Term R…
Step-by-Step Guide on Creating the Ul…
“BUY Sqribble? My Honest Review!
Top 12 Best Manga Websites Like Manga…
J.K. Rowling mentions a prophecy in this book that states, the one with the power to vanquish the Dark Lord approaches... born to those who have thrice defied him, born as the seventh month dies... and the Dark Lord will mark him as his equal, but he will have power the Dark Lord knows not... and either must die at the hand of the other for neither can live while the other survives... the one with the power to vanquish the Dark Lord will be born as the seventh month dies...
The whole story revolves around it. The connection between Voldemort and Harry grows stronger, and Dumbledore realizes that it is safe to keep a distance from Harry, but it creates trouble and misunderstandings between the two. The least favorite character Umbridge Dolores made the lives hell of everyone resides in Hogwarts.
She came to teach Defence Against the Dark Arts subject, but her real aim is to undermine Dumbledore and make sure that he is not making plans to become the Minister. Despite all her efforts, Harry starts DA (Dumbledore's Army), where he teaches the jinxes and curses to the students, so they can protect themselves against the Voldemort's Death Eaters.
The worst part of the Order of the Phoenix was when Sirius Black died. He was killed by his cousin Bellatrix Lestrange. It did not just break Harry's heart, but all the reader's as well. The book gave some unusual insights into the life of Harry's parents, which made him considerably annoying. Overall, this book laid some solid ground for the last two books, and I can't wait to read them.
Grab your copy from - Amazon IN Amazon US

Harry Potter and the Order of the Phoenix by J.K. Rowling