Three Dark Crowns Review and Book Of The Month Questions 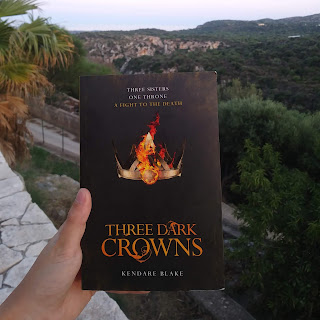 Three Dark Crowns by Kendare Blake was my book of the month with Chloe from Forever Fictional. Yes, we are back! Unfortunately we both agreed that it was a disappointing first read back (especially for Chloe, see her review *rant* HERE).
Each month, as a form of discussing the book, Chloe and I are going to send each other questions about our thoughts on the book. You can find Chloe's answers to my questions HERE.
THIS POST HAS SPOILERS - YOU HAVE BEEN WARNED!!!

The major flaw of this book that I have to comment on is the false advertising. Read any synopsis on Goodreads or even the back of the book and it intrigues you with a fight to death. What they don't tell you is that you have to get to the very last pages to even start to see any actual fight between them, the rest is just build up.

I liked being able to have an insight into all of the queens' realms as I can form a less biased point of view but it was told in such an odd way. Instead of being from the queens' perspectives, we got random characters tell the story from third person perspective. It just confused me and distanced me from the story as I struggled to connect to anyone with the narrative changing so much.

I was a bit gutted that out of the 3 different covers for the 3 different queens, I managed to get the cover of the queen I disliked the most. Seriously Mirabella, what was your input into the story other than ruining a perfectly good relationship?

I am definitely intrigued by the nice little cliffhanger at the end of the book. Were the sisters accidentally swapped?? How will this change things?? My first thought when reading this cliffhanger was definitely 'Dang, I wasn't planning on continuing the series but I want answers'. So I applaud you Kendare Blake for making me curious. Am I likely to continue the series? No.

Proven Methods for Successful Weight …
How to Get Rid of Ants
“The Friend Who May Not Seem a Friend…
Philippine government pressed to put …
51 Best Start-up Ideas to Try
Chloe's questions for me:
Who was your favourite queen?
Katherine as she always keeps trying even after making a big scene at the Gave Noir. No one would even help her to leave the room! And later she gets pushed off a cliff.. she goes through hell the whole Book yet still manages to deliver one of the best lines "I want revenge. And then I want my crown".

What power/gift would you want?
I would really like naturalist powers, even if I believe that they are the weakest in the book. I love the idea of the bond that you have with your familiar.

If you had a familiar, what would it be?
I would like to picture myself with some kind of bird (hopefully an exciting one like an eagle, not a pigeon haha!). It would be my lookout and come and sit on my shoulder and keep me company.

Why do you think Pietyr pushed Katherine?
I think Pietyr was always in it for the power (I was never rooting for them). Pietyr was always made aware of any information and was respected and trusted by the court. As soon as everything went wrong and he realised that Katherine was not powerful, I believe he was trying to get rid of her. If she dies no one would know he did it so he gets away with it, she lived so I am sure he gained enough sources to go into hiding. I'm sure we'd meet him later in the series.

Will Katherine forgive Pietyr?
I hope not. I think she's smart enough to stand up for herself. 'Bro, you can't just push me off a cliff and expect me to be cool about it'

Will Joseph end up with Mirabella or Jules?
I really hope Jules. Joseph and Mirabella bugged me. Extreme insta-love. What did Jules do to deserve this? She waited years for Joseph!

What was your favourite scene in the book?
It's not a major scene, but I loved it when Billy ignores his father and only bows to Arsinoe.

Who was your favourite side character?
Jules. She is basically the naturalist hero. She would do anything for the people she cares about. She could just show off about her power, instead she uses it to help.
I also like Billy. He was sweet.

Which queen - if any - do you think will be triumphant?
I don't think any will. Somehow they will all come together and rebel.

Do you think Katherine will end up being a naturalist?
Yes. Or a warrior. We don't know much about them, I feel they will come into the story a lot more.


This post first appeared on Liber Amoris, please read the originial post: here
People also like
Proven Methods for Successful Weight Loss
How to Get Rid of Ants
“The Friend Who May Not Seem a Friend” – The Cat and the Fire, Post 2 of 3
Philippine government pressed to put policies to bring GM crops like Vitamin A-rich rice to help solve worsening global hunger, malnutrition
51 Best Start-up Ideas to Try

Three Dark Crowns Review and Book Of The Month Questions