Poem - "The Allies" by Amy Lowell

"The Allies"
by Amy Lowell 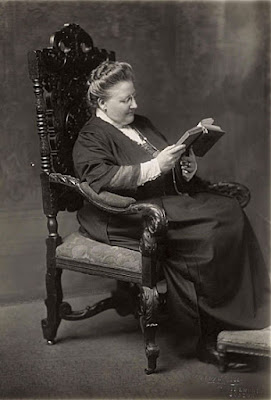 August 14th, 1914
Into the brazen, burnished sky, the cry hurls itself. The
zigzagging cry
of hoarse throats, it floats against the hard winds, and binds the
head
of the serpent to its tail, the long snail-slow serpent of marching
men.
Men weighed down with rifles and knapsacks, and parching with war.
The cry jars and splits against the brazen, burnished sky.
This is the war of wars, and the cause? Has
this writhing worm of men
a cause?
Crackling against the polished sky is an eagle
with a Sword. The eagle is red
and its head is flame.
In the shoulder of the worm is a teacher.
His tongue laps the war-sucked air in drought,
but he yells defiance
at the red-eyed eagle, and in his ears are the bells of new philosophies,
and their tinkling drowns the sputter of the burning sword. He
shrieks,
"God damn you! When you are broken, the word will strike
out new shoots."
His boots are tight, the sun is hot, and he may
be shot, but he is in
the shoulder of the worm.
A dust speck in the worm's belly is a poet.
He laughs at the flaring eagle and makes a long
nose with his fingers.
He will fight for smooth, white sheets of paper, and uncurdled ink.
The sputtering sword cannot make him blink, and his thoughts are
wet and rippling. They cool his heart.
He will tear the eagle out of the sky and give
the earth tranquillity,
and loveliness printed on white paper.
The eye of the serpent is an owner of mills.
He looks at the glaring sword which has snapped
his machinery
and struck away his men.
But it will all come again, when the sword is broken
to a million dying stars,
and there are no more wars.
Bankers, butchers, shop-keepers, painters, farmers -- men, sway
and sweat.
They will fight for the earth, for the increase of the slow, sure
roots
of peace, for the release of hidden forces. They jibe
at the eagle
and his scorching sword.
One! Two! -- One! Two! --
clump the heavy boots. The cry hurtles
against the sky.
Each man pulls his belt a little tighter, and shifts
his gun
to make it lighter. Each man thinks of a woman, and slaps
out a curse
at the eagle. The sword jumps in the hot sky, and the
worm crawls on
to the battle, stubbornly.
This is the war of wars, from eye to tail the serpent
has one cause:
PEACE!


This post first appeared on P&FQ - Poetry And Fascinating Quotes, please read the originial post: here
People also like
Fiction Series So Big, They Cross Multimedia Platforms: The Witcher Series by Karen Wiesner
YOU’RE A LONG TIME DEAD
Your Credit Score: 7 Important Things to Know About It
CGTN: People’s trust, the basis for rule of law in China
33 Politics and Bible Proverbs
The Voice of an Eagle – Luyeza

Poem - "The Allies" by Amy Lowell