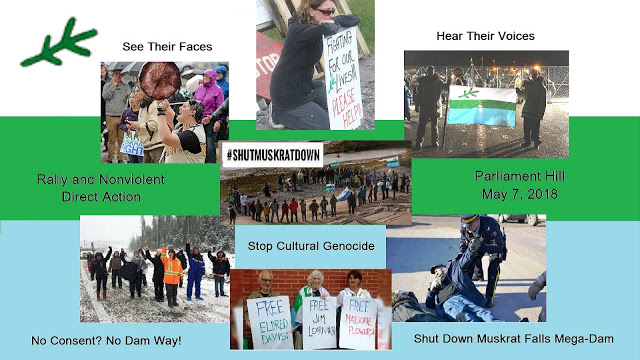 - HEAR THE VOICES of MUSKRAT FALLS -

We call all supporters to a national day of nonviolent direct
action organized by the Ontario-Muskrat Solidarity Coalition on
Parliament Hill in Ottawa (traditional, unceded Algonquin
territory), on May 7th 2018. Help us stop an act of cultural genocide and prevent a potentially catastrophic dam break that could drown up to a thousand people downstream from Muskrat Falls in Labrador (traditional, unceded lands of the Innu and Inuit.)
Since 2011, Indigenous people and settlers have been victims of an undemocratic process that has allowed the Muskrat Falls mega-dam to be forced on us regardless of our grave concerns about its well-documented lethal effects. This includes methylmercury poisoning of our traditional food web and the daily threat of dam collapse….” cont. Posted Wed 21 February, 2018 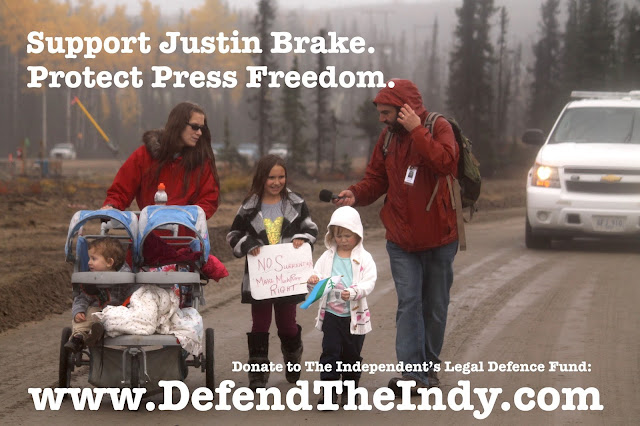 Support Justin Brake and #ProtectPressFreedom https://ricochet.media/en/2149/newfoundland-and-labrador-is-trying-to-jail-a-journalist-for-doing-his-job “The prosecution of an on-the-job journalist whose work has angered the government cannot be tolerated in a free and fair society."
https://www.youtube.com/watch?time_continue=6&v=awxTzloLqq4 17 months after reporting from #MuskratFalls, the criminal charges still stand.

A Furry’s Guide to Cryptocurrency
ViewSonic Pen Display ID1330 Review: …
What You Should Know About Disability…
Self Motivation: How to Keep Moving F…
Valentine’s Bingo & 5 More Activities…


This post first appeared on Self-catering Holiday Accommodation Mauritius, Amarilla At Albion, please read the originial post: here
People also like
A Furry’s Guide to Cryptocurrency
ViewSonic Pen Display ID1330 Review: Made For Professionals
What You Should Know About Disability Laws
Self Motivation: How to Keep Moving Forward In Your Career or Business
Valentine’s Bingo & 5 More Activities Kids Love!
شلالات نياجرا الأمريكية