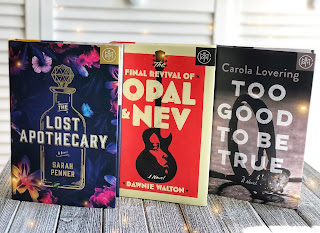 I recently signed back up to Book of the Month because I have a subscription box addiction and I really love their selections. I can’t wait to read all of these books!!

*This post contains referral links to BOTM. All synopses copied from Goodreads.

Microalgae can be a potential feed fo…
Music Profile: Crissi Cochrane - Soul…
5 Easy style hacks every woman should…
“The Friend Who May Not Seem a Friend…
MICRO BUSINESSES

Here are the books I chose for March:

The Lost Apothecary by Sarah Penner

A female apothecary secretly dispenses poisons to liberate Women from the men who have wronged them—setting three lives across centuries on a dangerous collision course.

Rule #1: The poison must never be used to harm another woman.

Rule #2: The names of the murderer and her victim must be recorded in the apothecary’s register.

One cold February evening in 1791, at the back of a dark London alley in a hidden apothecary shop, Nella awaits her newest customer. Once a respected healer, Nella now uses her knowledge for a darker purpose—selling well-disguised poisons to desperate women who would kill to be free of the men in their lives. But when her new patron turns out to be a precocious twelve-year-old named Eliza Fanning, an unexpected friendship sets in motion a string of events that jeopardizes Nella’s world and threatens to expose the many women whose names are written in her register.

In present-day London, aspiring historian Caroline Parcewell spends her tenth wedding anniversary alone, reeling from the discovery of her husband’s infidelity. When she finds an old apothecary vial near the river Thames, she can’t resist investigating, only to realize she’s found a link to the unsolved “apothecary murders” that haunted London over two centuries ago. As she deepens her search, Caroline’s life collides with Nella’s and Eliza’s in a stunning twist of fate—and not everyone will survive.

The Final Revival of Opal & Nev by Dawnie Walton

A poignant fictional Oral History of the beloved rock ‘n’ roll duo who shot to fame in the 1970s New York, and the dark, fraught secret that lies at the peak of their stardom.

Opal is a fiercely independent young woman pushing against the grain in her style and attitude, Afro-punk before that term existed. Coming of age in Detroit, she can’t imagine settling for a 9-to-5 job—despite her unusual looks, Opal believes she can be a star. So when the aspiring British singer/songwriter Neville Charles discovers her at a bar’s amateur night, she takes him up on his offer to make rock music together for the fledgling Rivington Records.

In early seventies New York City, just as she’s finding her niche as part of a flamboyant and funky creative scene, a rival band signed to her label brandishes a Confederate flag at a promotional concert. Opal’s bold protest and the violence that ensues set off a chain of events that will not only change the lives of those she loves, but also be a deadly reminder that repercussions are always harsher for women, especially black women, who dare to speak their truth.

Decades later, as Opal considers a 2016 reunion with Nev, music journalist S. Sunny Shelton seizes the chance to curate an oral history about her idols. Sunny thought she knew most of the stories leading up to the cult duo’s most politicized chapter. But as her interviews dig deeper, a nasty new allegation from an unexpected source threatens to blow up everything.

Provocative and chilling, The Final Revival of Opal & Nevfeatures a backup chorus of unforgettable voices, a heroine the likes of which we’ve not seen in storytelling, and a daring structure, and introduces a bold new voice in contemporary fiction.

Too Good To Be True by Carola Lovering

ONE LOVE STORY. TWO MARRIAGES. THREE VERSIONS OF THE TRUTH.

Skye Starling is overjoyed when her boyfriend, Burke Michaels, proposes after a whirlwind courtship. Though Skye seems to have the world at her fingertips―she’s smart, beautiful, and from a well-off family―she’s also battled crippling OCD ever since her mother’s death when she was eleven, and her romantic relationships have suffered as a result.

But now Burke―handsome, older, and more emotionally mature than any man she’s met before―says he wants her. Forever. Except, Burke isn’t who he claims to be. And interspersed letters to his therapist reveal the truth: he’s happily married, and using Skye for his own, deceptive ends.

In a third perspective, set thirty years earlier, a scrappy seventeen-year-old named Heather is determined to end things with Burke, a local bad boy, and make a better life for herself in New York City. But can her adolescent love stay firmly in her past―or will he find his way into her future?

On a collision course she doesn’t see coming, Skye throws herself into wedding planning, as Burke’s scheme grows ever more twisted. But of course, even the best laid plans can go astray. And just when you think you know where this story is going, you’ll discover that there’s more than one way to spin the truth.