My Thoughts on: The Hatmakers by Tamzin Merchant 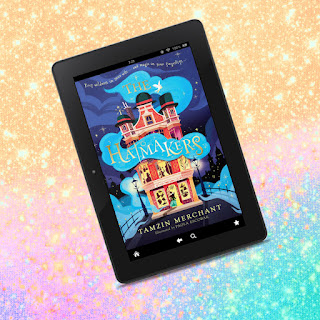 The Hatmakers by Tamzin Merchant

Cordelia comes from a long line of magical milliners, who weave alchemy and enchantment into every hat. In Cordelia’s world, Making – crafting items such as hats, cloaks, watches, boots and gloves from magical ingredients – is a rare and ancient skill, and only a few special Maker families remain.

When Cordelia’s father Prospero and his ship, the Jolly Bonnet, are lost at sea during a mission to collect hat ingredients, Cordelia is determined to find him. But Uncle Tiberius and Aunt Ariadne have no time to help the littlest Hatmaker, for an ancient rivalry between the Maker families is threatening to surface. Worse, someone seems to be using Maker magic to start a war.

I adore Middle grade fantasies! They are always such a joy to read and I had a lot of fun reading this one. I was initially drawn to The Hatmakers because of the gorgeous cover. Middle grade books have some of the prettiest covers I’ve ever seen. The synopsis also seemed fascinating, so I was eager to read this book.

Merchant’s magical middle grade fantasy was a fun and enjoyable read. I loved the fantasy world and the characters in this book.

In The Hatmakers, there are several families of Makers who weave magic into items of clothing. There are the Hatmakers, Bootmakers, Glovemakers, Cloakmakers, and Watchmakers. These families used to belong to a guild of Makers, but they no longer get along and are now rivals.

The main characters in this story were so adorable. I loved the friendships between Cordelia, Goose and Sam. They became mini investigators as they tried to solve the mysteries of the Makers. Cordelia also sought to find out what happened to her father, who presumably perished at sea.

I thought The Hatmakers was a fun and entertaining middle grade read, and I think this book would be perfect for kids and adults. I’m really looking forward to the next book in this series!

My Thoughts on: The Hatmakers by Tamzin Merchant