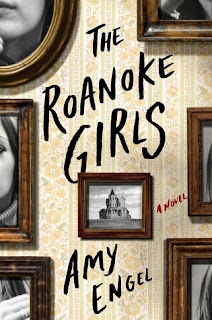 The Roanoke Girls by Amy Engel
Release date: March 7th 2017
Publisher: Crown
Pages: 279
Rating: 5 out of 5 stars
Summary
From Goodreads:
Roanoke girls never last long around here. In the end, we either run or we die.

Sobriety In The Time of Quarantine: T…
كيفية انشاء حساب يوتيوب
Sometimes, it is all rainbows!
Kiran SSC Math’s 8900+ Chapterwise PD…
Prepare For Victory
After her mother's suicide, fifteen year-old Lane Roanoke came to live with her grandparents and fireball cousin, Allegra, on their vast estate in rural Kansas. Lane knew little of her mother's mysterious family, but she quickly embraced life as one of the rich and beautiful Roanoke girls. But when she discovered the dark truth at the heart of the family, she ran fast and far away.
Eleven years later, Lane is adrift in Los Angeles when her grandfather calls to tell her Allegra has gone missing. Did she run too? Or something worse? Unable to resist his pleas, Lane returns to help search, and to ease her guilt at having left Allegra behind. Her homecoming may mean a second chance with the boyfriend whose heart she broke that long ago summer. But it also means facing the devastating secret that made her flee, one she may not be strong enough to run from again.
As it weaves between Lane's first Roanoke summer and her return, The Roanoke Girls shocks and tantalizes, twisting its way through revelation after mesmerizing revelation, exploring the secrets families keep and the fierce and terrible love that both binds them together and rips them apart.
Review
“You know your family’s fucked up, right?” he asked. “Like, seriously screwed.”
But damn, no one warned me of how much.
Wait a second, my background music isn't setting the right mood for me to write. *Try by Pink comes on* Okay, we're good now.
Sometimes I think that it's better
To never ask why
Funny how the heart can be deceiving
More than just a couple times
Why do we fall in love so easy
Even when it's not right
If this song does not describe the sick and twisted "love" that goes on in this novel, then I don't know what does. But you're probably thinking "what the hell's going on?," so let's start at the beginning. You can come back once you've read it and understand a little better.
This is an extremely dark Book, yet I devoured the last 150 pages in the span of a couple of hours. It kinda makes me wonder what's wrong with me.
*this will be a spoiler-free review because I don't want to ruin it for you*
The story already starts with quite disturbing news: Lane's mom committed suicide and now she has to go live with grandparents she's never met in the house her mom calls a nightmare. Delightful. And then it just keeps getting worse.
The story is told from different time periods, one from the summer Lane spent at Roanoke when she was young and one 11 years later, when she has to go back after her cousin goes missing. This  will often make you want to just skip parts to find out what the hell happened. I suggests you don't, though, because all the hints are there for you to see.
The writing is fantastic, it hooks you up immediately. I promise there isn't a single boring moment in here. Or maybe there are and my mind erased them to fully appreciate the other amazing parts.
You won't find a single morally correct character in this book. And it's one of the best parts of it.
What surprised me was that despite how awful the situation in this book is, it wasn't graphic. Not even a little bit. And to lighten the mood a little bit, there is also a healthier love story going on.
This is not a happy story, okay? I wouldn't suggest reading it if you're under 18, but that's on you. The plot is extremely dark and deals with themes that may be too much for some of you.

5 out of 5 stars
About the author

Amy Engel is the author of THE BOOK OF IVY young adult series. A former criminal defense attorney, she lives in Missouri with her family. THE ROANOKE GIRLS (March 7, 2017), is her first novel for adults.

I received this book from Blogging For Books for this review.
Do you enjoy  books with dark topics? This one's for you! Do you recommend any books like this one? Let me know.