Any new Book by Julia Quinn is an auto-buy for me. I love historical romances and Julia Quinn is the one author whose books are worth every penny you spend. They have romance, a fairy-tale setting, intrigue, and tons of laughter. 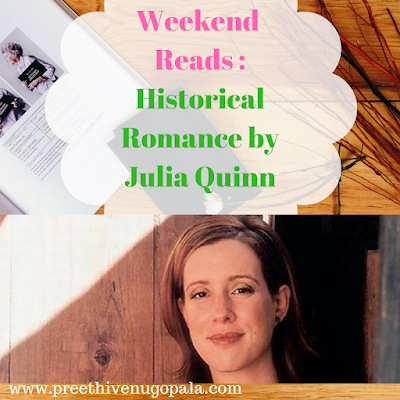 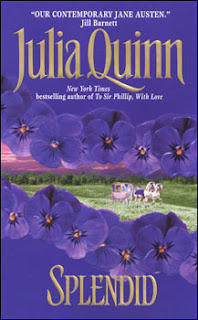 There are two things everyone knows about Alexander Ridgely. One, he's the Duke of Ashbourne. And two, he has no plans to marry anytime soon...
That is until a redheaded American throws herself in front of a carriage to save his young nephew's life. She's everything Alex never thought a woman could be—smart and funny, principled and brave. But she's a servant, completely unsuitable for a highborn duke—unless, perhaps, she's not quite what she seems...
American heiress Emma Dunster might be surrounded by Englishmen, but that doesn't mean she intends to marry one—even if she has agreed to participate in one London Season. When she slipped out of her cousins' home, dressed as a kitchen maid, all she wanted was one last taste of anonymity before her debut. She never dreamed she'd find herself in the arms of a dangerously handsome duke... or that he'd be quite so upset when he discovered her true identity. But true love tends to blossom just when one least expects it, and passion can melt even the most stubborn of hearts.

This is the debut book by Julia Quinn and I loved every bit of it. Emma's character is so well written that she is my favorite among all Julia Quinn heroines. And yes, it is hilarious, filled with toe-curling love scenes and of course, (sigh) a swoon-worthy hero.
An offer from a Gentleman: 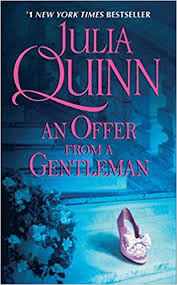 Will she accept his offer before the clock strikes midnight?
Sophie Beckett never dreamed she'd be able to sneak into Lady Bridgerton's famed masquerade ball—or that "Prince Charming" would be waiting there for her! Though the daughter of an earl, Sophie has been relegated to the role of servant by her disdainful stepmother. But now, spinning in the strong arms of the debonair and devastatingly handsome Benedict Bridgerton, she feels like royalty. Alas, she knows all enchantments must end when the clock strikes midnight.
Who was that extraordinary woman? Ever since that magical night, a radiant vision in silver has blinded Benedict to the attractions of any other—except, perhaps this alluring and oddly familiar beauty dressed in housemaid's garb whom he feels compelled to rescue from a most disagreeable situation. He has sworn to find and wed his mystery miss, but this breath-taking maid makes him weak with wanting her. Yet, if he offers his heart, will Benedict sacrifice his only chance for a fairy tale love?

What I loved: I love the story of Cinderella. This is another Cinderella Story which is far more poignant, filled with writing and incidences which will make you fall in love with the characters. And of course, who doesn’t love a fairy-tale remade into an unforgettable historical romance.
Benedict Bridgerton and Sophie will make you forget the original Cinderella and the Prince. Period.
Duke and I 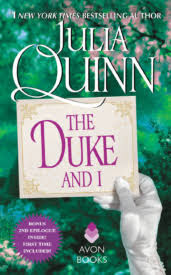 Can there be any greater challenge to London’s Ambitious Mamas than an unmarried duke?
—Lady Whistledown’s Society Papers, April 1813
By all accounts, Simon Basset is on the verge of proposing to his best friend’s sister, the lovely—and almost-on-the-shelf—Daphne Bridgerton. But the two of them know the truth—it’s all an elaborate plan to keep Simon free from marriage-minded society mothers. And as for Daphne, surely she will attract some worthy suitors now that it seems a duke has declared her desirable.
But as Daphne waltzes across ballroom after ballroom with Simon, it’s hard to remember that their courtship is a complete sham. Maybe it’s his devilish smile, certainly it’s the way his eyes seem to burn every time he looks at her… but somehow Daphne is falling for the dashing duke… for real! And now she must do the impossible and convince the handsome rogue that their clever little scheme deserves a slight alteration, and that nothing makes quite as much sense as falling in love…
What I loved: This is the first book of the Bridgerton series that I read and made me fall in love with the Bridgerton Clan. Simon Basset and Daphne will dazzle you with their hilarious dialogues, fights and of course a sizzling romance.

When he was Wicked: 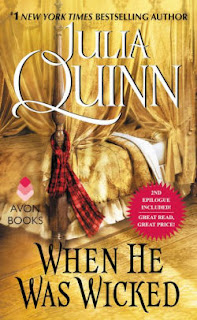 Everything was so much simpler... when he was wicked.
In every life, there is a turning point. A moment so tremendous, so sharp and breathtaking, that one knows one's life will never be the same. For Michael Stirling, London's most infamous rake, that moment came the first time he laid eyes on Francesca Bridgerton.
After a lifetime of chasing women, of smiling slyly as they chased him, of allowing himself to be caught but never permitting his heart to become engaged, he took one look at Francesca Bridgerton and fell so fast and hard into love it was a wonder he managed to remain standing. Unfortunately for Michael, however, Francesca's surname was to remain Bridgerton for only a mere thirty-six hours longer—the occasion of their meeting was, lamentably, a supper celebrating her imminent wedding to his cousin.
But that was then... Now Michael is the earl and Francesca is free, but still she thinks of him as nothing other than her dear friend and confidant. Michael dares not speak to her of his love... until one dangerous night, when she steps innocently into his arms, and passion proves stronger than even the most wicked of secrets...

What I loved:
I heart books with second chances in love. Here Francesca Bridgerton doesn’t seek love, it finds her. The entire story was a compelling read for me. I have read it multiple times and each time, I loved it for a different reason. Michael Stirling is without doubt a drool worthy hero.

If you are by now tempted to buy her books, click the below link to check out her books from Amazon.
Books By Julia Quinn