Rory Wins His 20th PGA Tour Title And Viewers Even Got To See Some Of It!

The CJ Cup relocated to a Fazio built near where Blue Origin lands rockets and despite The Summit offering up his usual insipid design, somehow attracted a stellar leaderboard.

Rickie Fowler wanted back in the winner’s circle but Colin Morikawa and then eventual winner Rory McIlroy passed him down the stretch for his 20th PGA Tour win. And we barely got to see it. At least, by modern golf TV standards.

A predictable confluence of issues arose to deprive American fans of seeing the leaders until their 9th hole when the action started to dull. The PGA Tour Champions’ SAS Championship ran long and then into a sudden death playoff. This cut the first 15 minutes out of the CJ Cup’s three-hour allotted window before Golf Channel tried a split screen that didn’t soothe angry viewers who’d already missed most of the front nine. Soon, the Champions took priority with Bernhard Langer taking his sweet time and Miguel Angel Jimenez trying to pass Lee Janzen. Eventually, the playoff ended, Janzen gave an emotional interview following a winning birdie putt, and those all-important Schwab Cup standings were shown.

The first groups of the SAS Championship did not tee off until 9:45 am ET, with the leaders going at 11:55 a.m. ET. Apparently the geezers needed their beauty rest?

Also, the Champions played in threesomes. Breaking five hours is out of the question on any tour playing threesomes, meaning the leaders were bound to finish at the CJ Cup’s 5 p.m. ET start. To account for the withering Schwab Cup race pressure and the possibility of a playoff, the Champions should have teed off a least 45 minutes earlier.

Making all of this worse: the Golf Channel app did not work for those attempting to stream the CJ Cup and there is no PGA Tour Live coverage option to run a stream of the coverage. The Comcast-ravaged operation appears to be running out the clock until a new media deal starts in January 2022, one where the PGA Tour takes more control (though they already have a foot in the door when it comes to programming and scheduling, so this weekend’s fiasco is largely a Global Home-based screw-up).

Perhaps in the future the Tour will find a place for this coverage or use other networks when increasingly longer rounds are running into each other? Of course, NBC is also folding their namesake sports channel soon, so that’s one less option. If they care, a major question at this point.

Ultimately this was just bizarre combo platter of bad scheduling, bad tee time math, slow play, a playoff and the leadership worrying about everything but putting out a good product. And boy did they hear about it.

I’ve seen my share of viewer-rage slaughters on social media, and even with most sports fans watching other things Sunday, there was understandable interest in this leaderboard. The rage was intense. But fans need to get used to this. Play not getting any faster as every par-5 is reachable and no one is forced to rush. Coupled with a host network that is just trying to get something on the air and a Tour focused on everything but the way its product looks, this is bound to happen again.

More of the feedback to a pinned PGA Tour Tweet announcing the Sunday start time: 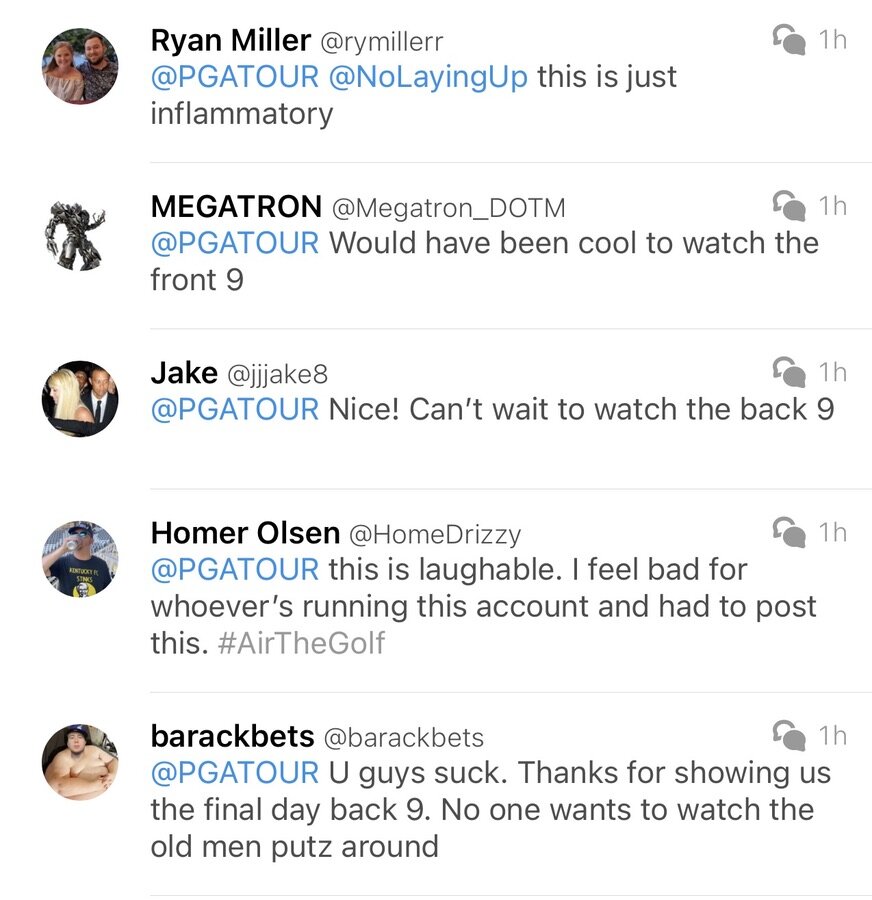 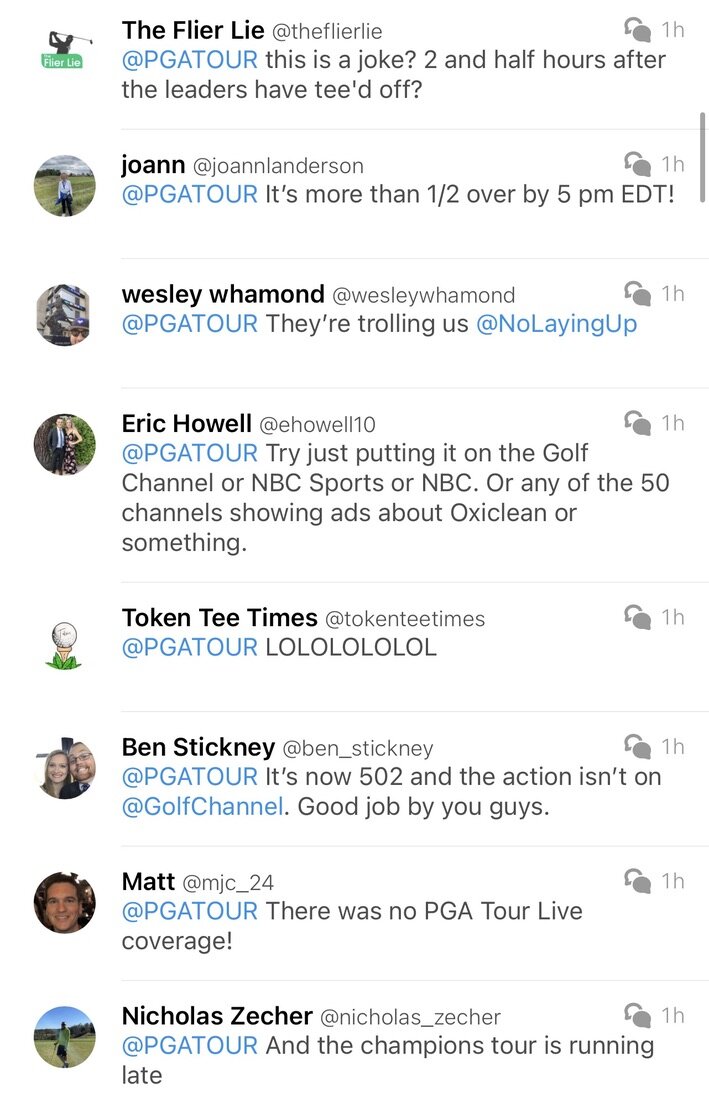 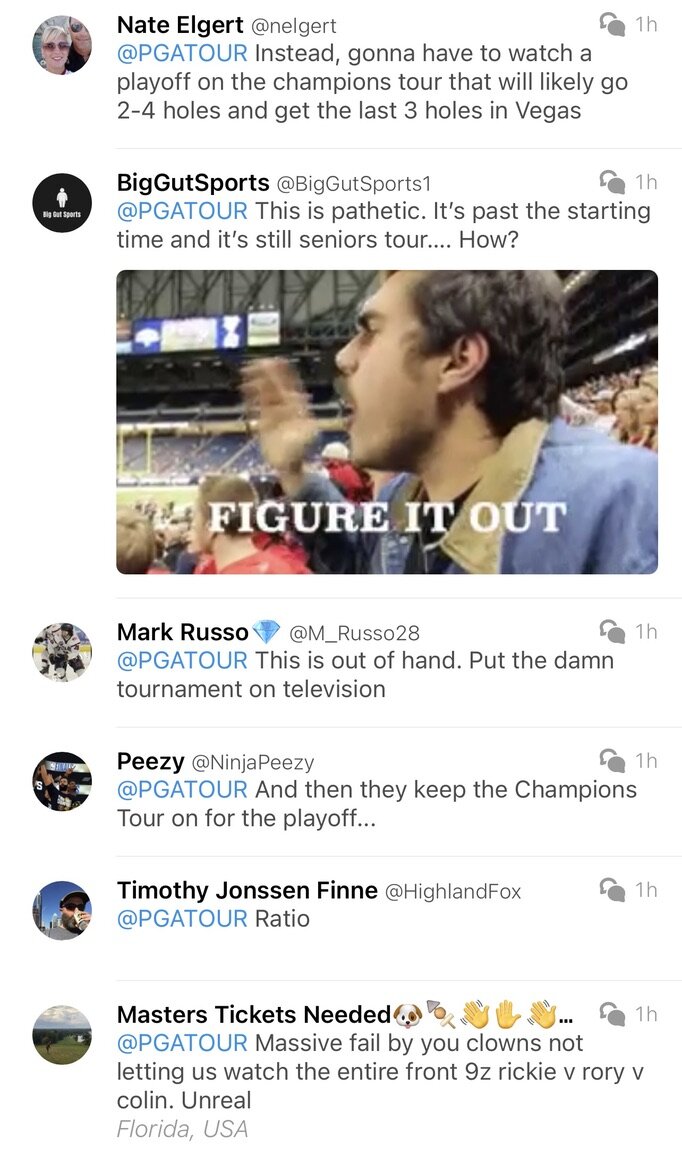 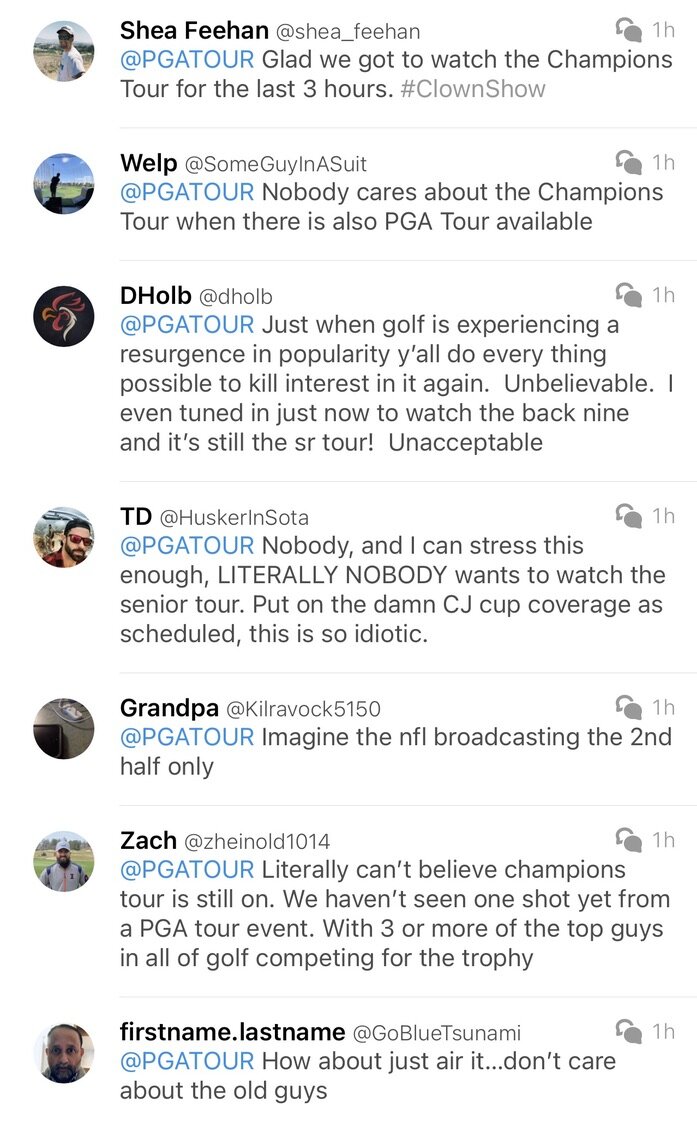 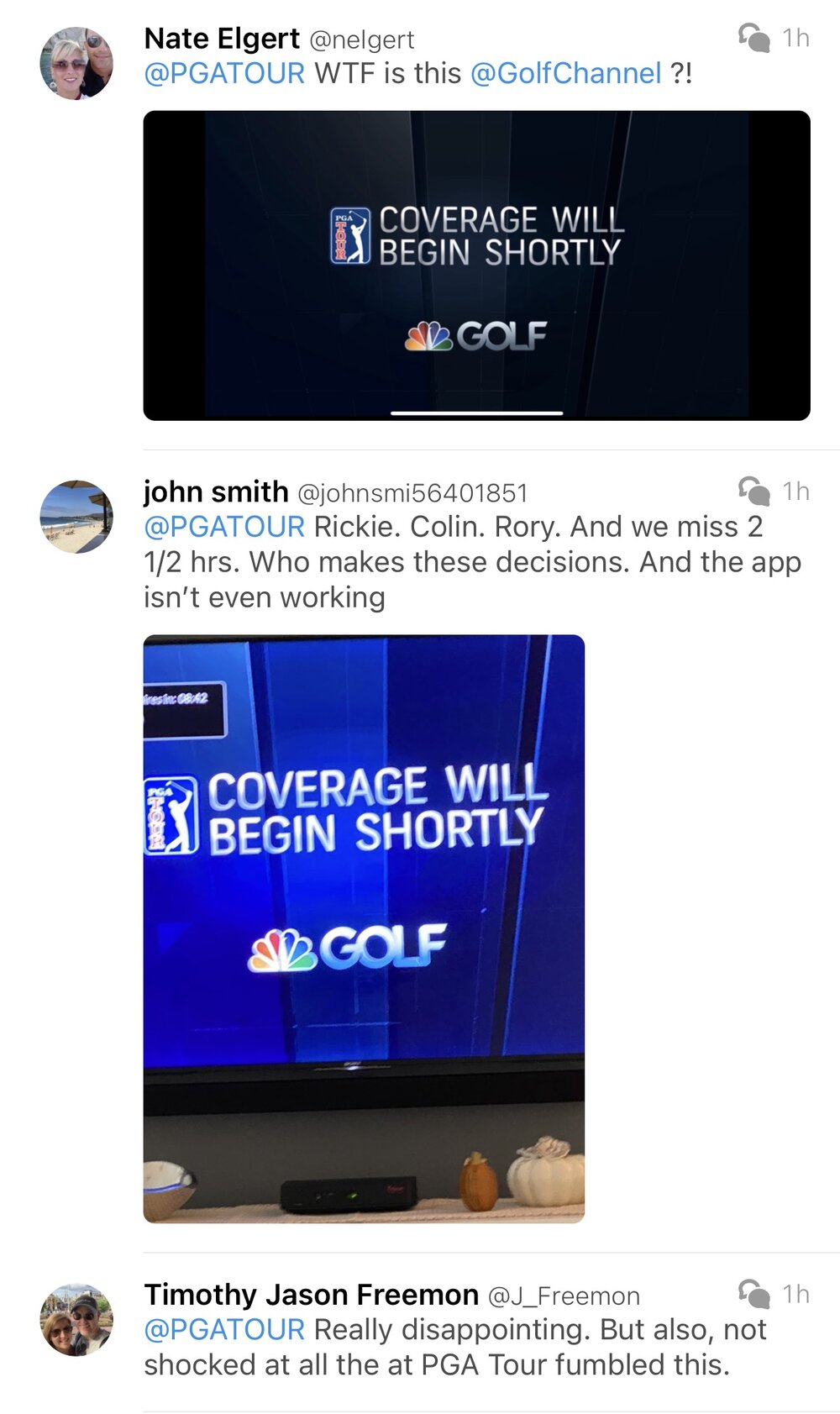 Rory Wins His 20th PGA Tour Title And Viewers Even Got To See Some Of It!