Review of The Eighth issue #1 here

Adam Lawson is a writer that is well-known for his ability to keep you interested in reading his work. I recently had the pleasure of interviewing Adam for our blog and he discussed the hard work that it takes to become a successful writer in the American entertainment industry, which is something that is well-showcased with his creator-owned comic book, The Eighth.

A Ratched venimos por Sarah Paulson y…
Spider-Man: If This Be My Destiny - L…
How to Write Your About Me Page: Guid…
Sex Tips for Men: How to Be Better in…
Crunchyroll – How to Watch Anime Onli…

I already reviewed the first issue of this comic, showing David’s first contact with the weapon of the Sumerian gods. In this second issue, we get more action, Character development, and a lot more enjoyment! 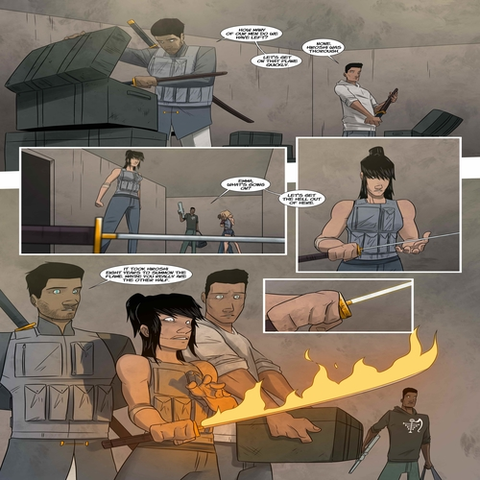 David and his friends have to deal with the consequences of the first issue’s cliffhanger. Our protagonist is dealing with the loss of loved ones and becoming part of the government whilst they are trying to use The Eighth for their own commercial gain. Three months go by and David and his friends decide to find out more about the weapon’s origin and the legendary Sumerian gods.

All of this ends up taking them to Peru, where it turns out they are being followed. All hell breaks loose once we find out the truths about the places they find in Peru. Compared to the first issue, I think this one is an improvement because Lawson now has the space to make the characters grow and develop, in comparison to the first issue where he had to introduce the main aspects of the Story and the characters. He now has everything he needs to keep the story going and it is very enjoyable, with a good amount of action throughout the issue. The element of a quest is entertaining when combined with the sense of hopelessness that surrounds David and the responsibility bestowed upon him.

However, I found the pacing issues from the first installment still remain. I mentioned in the first issue that Lawson has a few pacing issues with The Eighth and it continues here, with the characters constantly moving from one situation to another with no time in-between. One scene does try to create some breathing space with the characters in a hotel, but it doesn’t add too much to the development of the story as a whole.

Perhaps it’s me nitpicking, but those are a few issues that I have with the second issue. Having said that, those points don’t stop this issue from being highly enjoyable. The pages flow with ease, the dialogue feels organic and lively and the action scenes are spontaneous and well-crafted, which is something that most modern mainstream comics are struggling with these days. Jorin Evers is as strong an artist as ever here. I felt that his art has a slightly rawer feel when compared to the first issue, but I say that in a positive manner. It adds to the sense of urgency that the story has and it goes well with the straightforward nature of the plot.

I like his art style a lot. It may not be for everybody, but I like the stylized feel that it has and the details he adds when it comes to settings. I also enjoy the acting in the characters’ faces because he draws them in a very expressive manner which adds another element to the comic’s storytelling. This is something that only the best writer-artists combos can accomplish. The Eighth is a solid series and I do truly believe this. Adam Lawson has a very clear idea of what he was aiming for and manages to accomplish his goal with strong dedication.

This is a comic that combines very dark elements with an urban feeling. It’s messy, dark and lots of fun, which is something many writers struggle with, so props to him for managing to do that in such a capable manner.

I highly recommend you check out this issue!