Sometimes I feel like Metro Manila is churning out restaurants faster than I can chew. Once a week is the most I eat out, so obviously I am not really able to catch up with the latest restaurant openings. I hope you guys don’t mind– I don’t really care about being first in line as long as I can give you an honest account of my dining experience.

Sexy Games for Married Couples
Super Hybrid Rice from China to aid P…
El amor Atípico de Cassie e Izzie
Ddos Attack On WordPress, How To Prev…
Where To Stay In Barcelona 2020 [The …

This time around however, I got to visit a fairly new joint opened by The Tastless Group (same people behind Le Petit Souffle and Hanamaruken, among others) because they sent me a GC. This restaurant did enter my radar when it first opened, but I wanted to let the hype lessen a bit before coming over. In case you guys didn’t know, Ping Pong Diplomacy is an actual historical event that involved China and the United States during the Nixon era. Relations between the two nations had been very icy in the 1970’s, but then China decided to open its doors to American table tennis athletes by hosting a ping pong competition. This decision came after a chance encounter between two table tennis superstars from both countries surfaced in the papers, and it depicted them being friendly and even exchanging small gifts. Who knew that the sport of table tennis would spark such an important relationship right?

Translating all that history into this restaurant, Ping Pong Diplomacy offers a fusion of American and Chinese food behind three heavyweight chefs Him Uy de Baron, Noel Mauricio, and Miko Aspiras. For me, it’s more Chinese than American, but some pretty interesting adjustments ensure their dishes stand out from the usual Chinese fare both in appearance and taste. 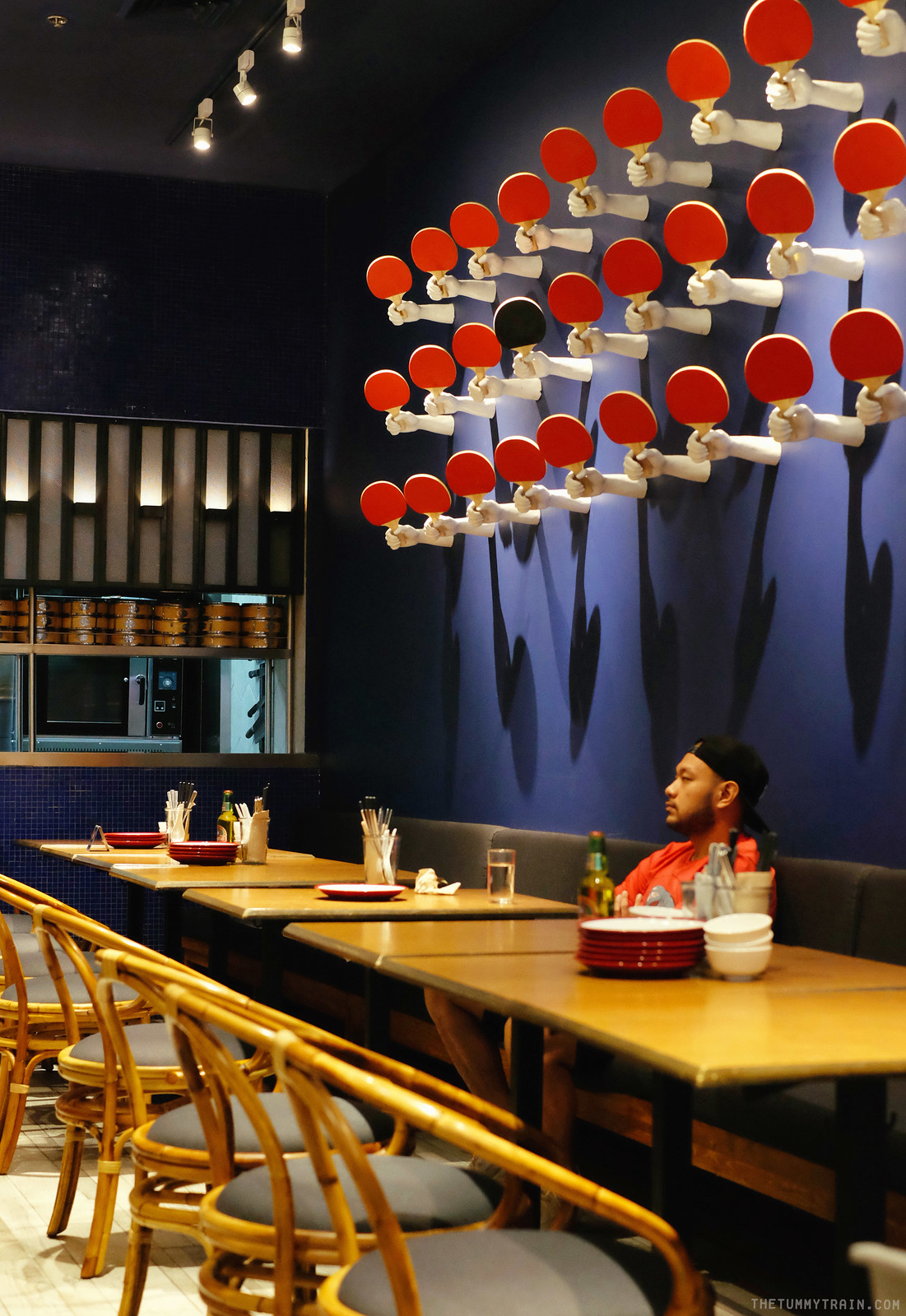 According to owner Charles Paw, Ping Pong Diplomacy was inspired by the many Chinese restos in Binondo, but poshed up to become more Instagram worthy. I love how the accordion gates and the open kitchen with the dimsum steamers add that Hong Kong restaurant feel, but the pop art on the walls are definitely Western-looking despite its Asian subjects. Of course, the paddles lining the walls are a good touch!

Having a nice interior can only do so much for a restaurant though, so let’s move on to the food. Dumplings made of edamame and three kinds of mushrooms, flavored with truffle oil. The wrappers encasing these dumplings were so soft they broke apart as I picked them up even with a spoon, which I didn’t like. Luckily the juicy filling makes up for it. The dumplings are packed with truffle flavor and since I had only one I didn’t feel too overwhlemed. Having all four on your own might be a different story though. Much like your typical Scotch Egg, this one is a 5-minute egg wrapped in a crisp and well-seasoned prawn and egg crust. The addition of toasted sesame seeds and the dipping sauces give it that Asian flair. While they serve this with both Sriracha and Wasabi-Mayo, I think it tasted better dipped in the latter. This burger is a wild burst of flavor in your mouth, but it’s the kind that I like. It’s not overwhelming, but it tickles your tastebuds more than usual. The pork belly is almost melt-in-the-mouth. The buns are soft, yet firm enough to hold everything in without making a mess while you eat. I always appreciate that. This burger is delicious in its own right, but I think the effect for me was lessened because I got a taste of the more flavorful one first. Each juicy strand of chicken here is nicely coated with spices, and the onions add a lingering sweet-savoriness. 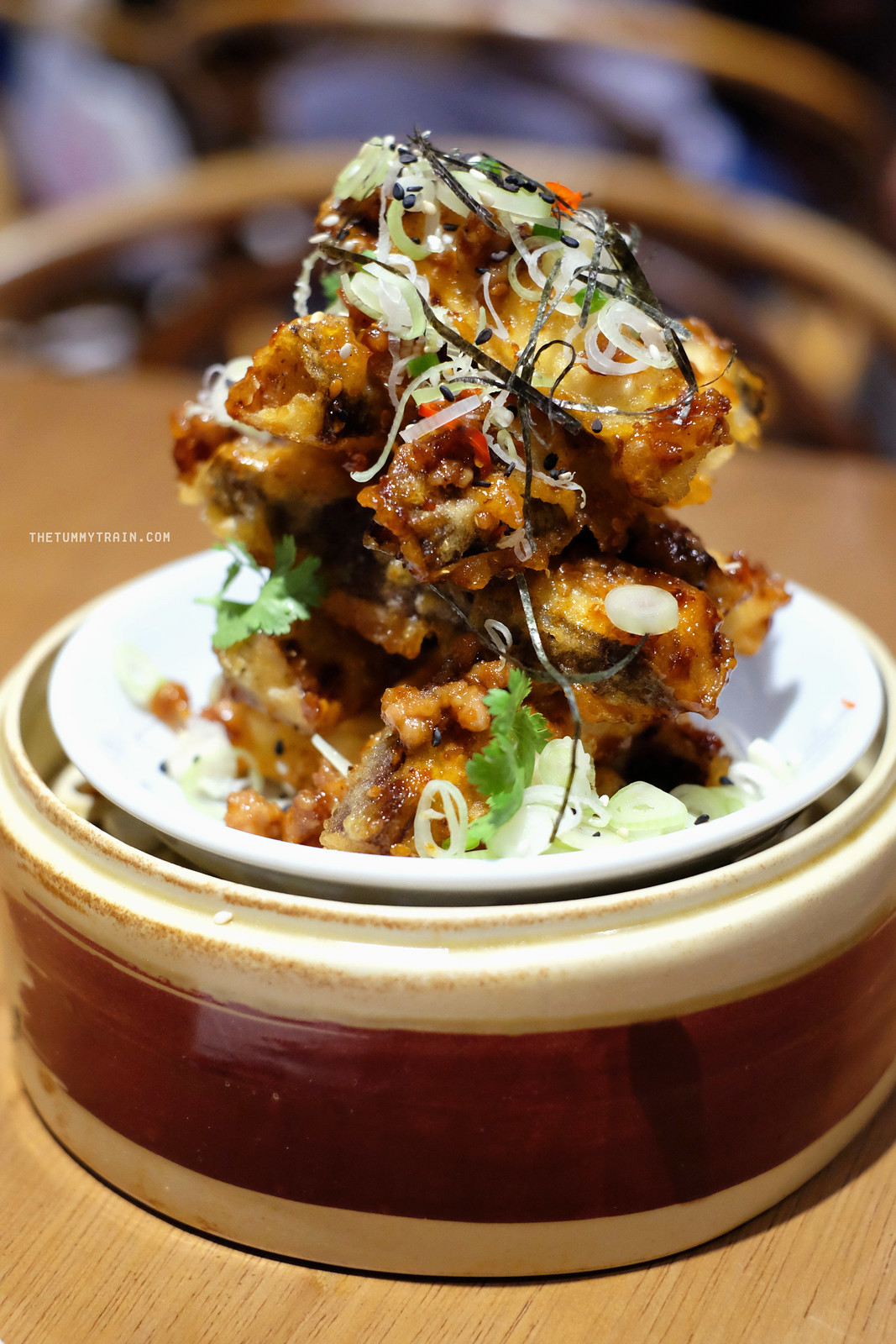 As a fan of eggplant, I have tried it in many enough different forms to determine this isn’t my favorite way of eating it, but I can definitely see how other non-eggplant eaters will dig this. Super soft eggplant rests inside a crispy shell that’s coated with a sticky sweet sauce. There’s a hint of savoriness in every bite as well. These are best eaten hot because they do harden up once at room temp. Ahhh always one of my favorite things to order in any Chinese resto. The mapo tofu dish often makes or breaks my opinion of a Chinese restaurant, and I’m happy to report that Ping Pong Diplomacy does their version really well. And oh boy, I love how spicy it is! Instead of the usual tofu cubes, there’s a silky smooth layer of soy custard resting underneath the sauce and slices of char siu. It’s got that classic familiar spicy mapo tofu flavor, but dare I say I love this custard version more! This is the best with plain rice, but I would devour this without it just the same. (Please note I really like spicy food so while this isn’t super spicy for me, it might be for others!) This stir-fried noodle dish is another favorite from the meal because I’m biased. I love noodles! This dish is soy sauce-based, with each strand of noodle coated in a sweet-savory-salty flavor. The only thing that would’ve made this perfect for my taste is more seafood on top, but the mussels and Chinese char siu work well enough. Mix it all together with the 62-degree egg for maximum experience. 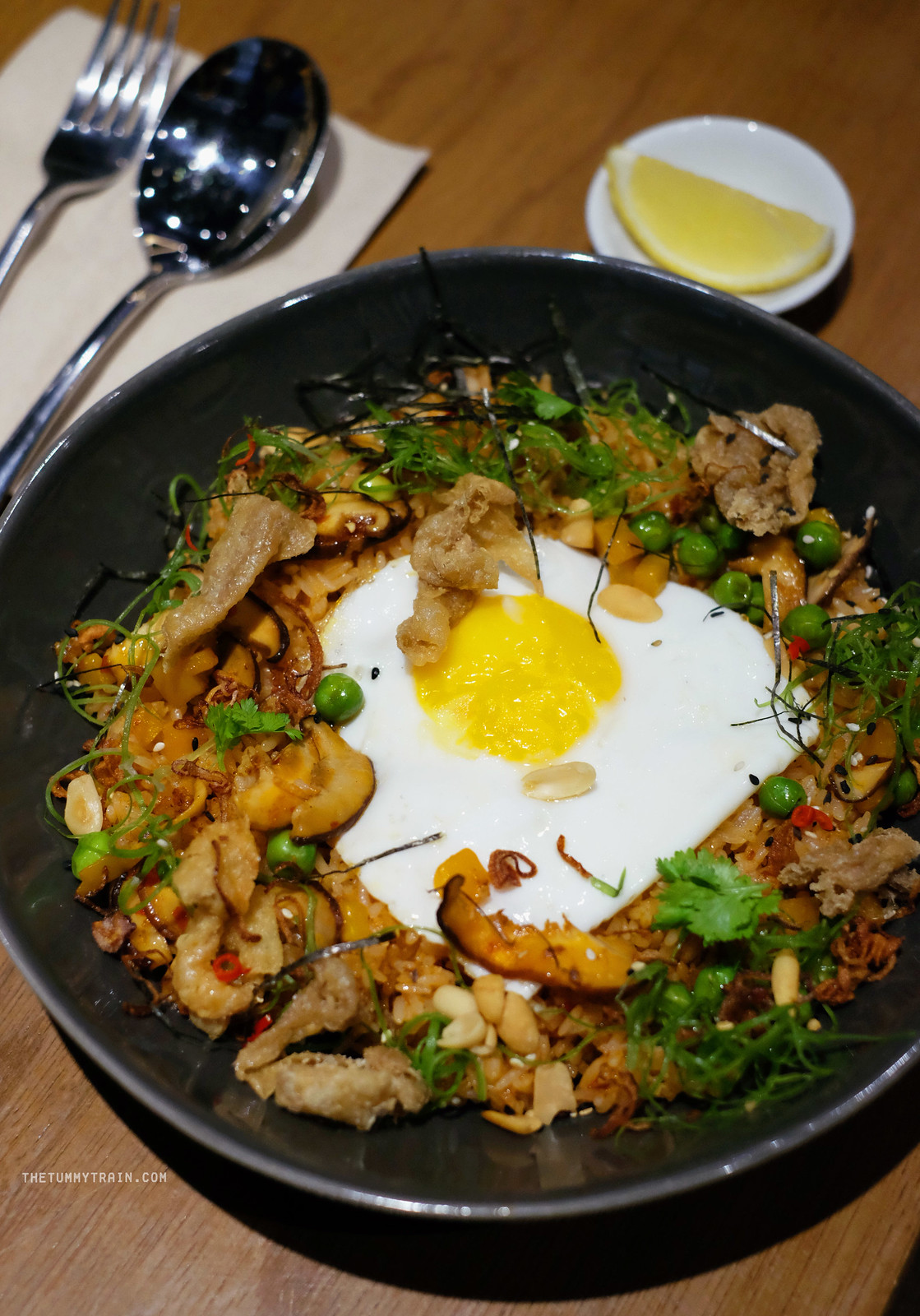 This is fried rice fully loaded with chicken skin and shiitake mushrooms, then topped with peanuts, green peas, strips of nori, and an egg. What I liked most though was that slight kick each bite offered thanks to the fermented chili beans used here. It’s definitely a lot more flavorful than your typical Chinese fried rice, which is why you don’t even need a viand to eat with this. In fact it might even be too overwhelming to eat this with anything equally flavorful. I have been reading so many good things about these Fortune Balls so I was super excited to try them, and unfortunately they weren’t quite what I was expecting. The balls come in Taro, Black Sesame, and Ginger, but they were so sweet I didn’t get as much of their individual flavors as I would’ve liked. That delicious pistachio paste underneath helps kind of alleviate the sweetness somehow, and the brittle adds crunch alongside the chewy. This “deconstructed apple pie” dessert was better for me. The caramelized singkamas were again very very sweet, but when you eat them with the puff pastry and the ice cream in one scoop… Surprise, surprise! It’s really yummy!

I am a big fan of that Five-Spice Ice Cream. It’s not so sweet and has just the right hint of spice to remind you of what it is. I wish they gave a much much bigger scoop than this. The ice cream is amazing with the sesame brittle. I would love it if Ping Pong Diplomacy served just that ice cream topped with that awesome brittle. 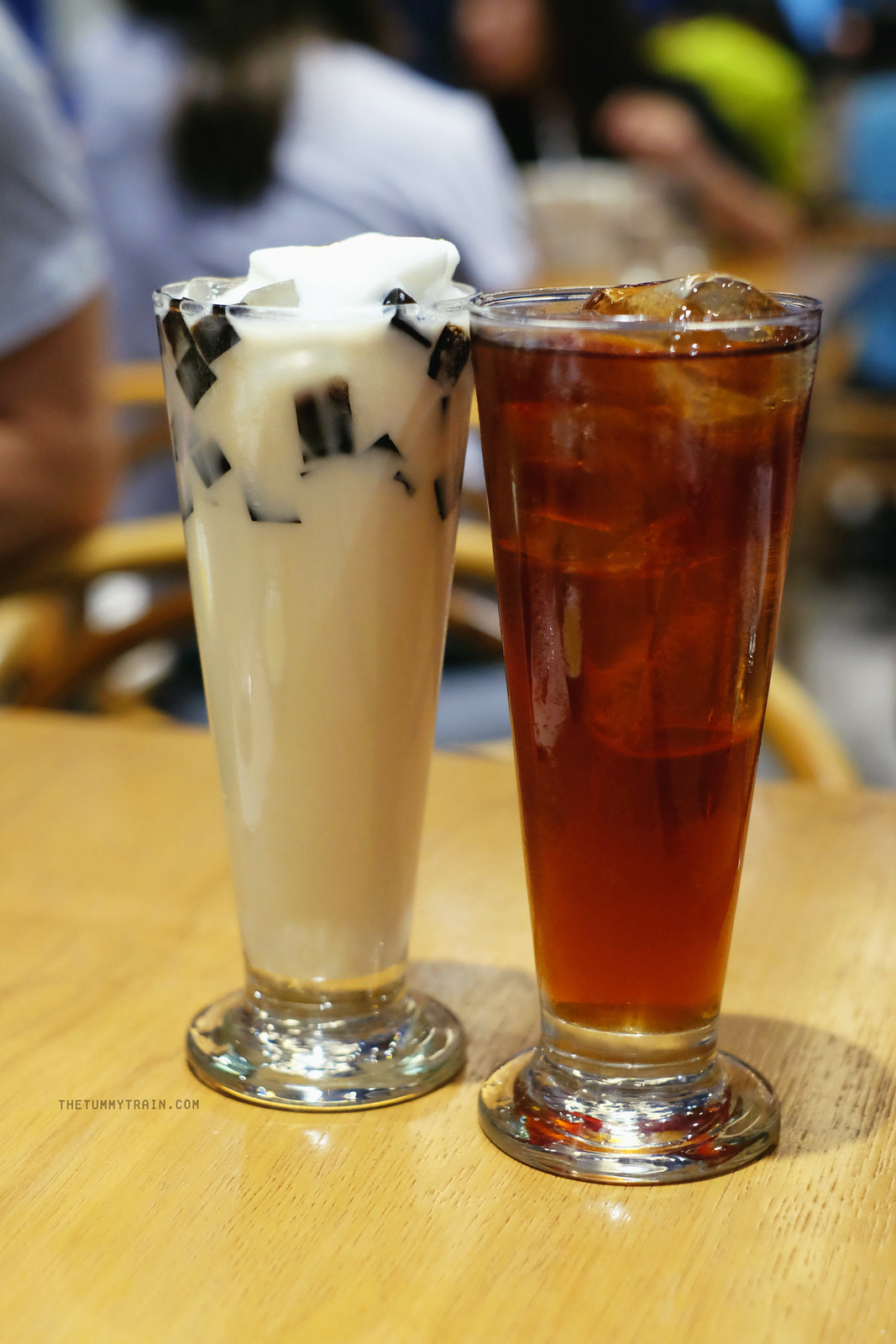 I don’t have too many things to say about the Rose Iced Tea, but my mother ordered the Soy Cooler and the moment I had a sip, I almost didn’t want to return it! It’s an almond based drink but it doesn’t taste like those ridiculously strong alcohol-like almond flavorings. Instead, it’s almost milky. It’s also not too sweet! Every sip gives you some of that jelly to chew on. As a supporter of the whole milk tea craze it wasn’t surprising that I enjoyed this one a lot.

People game for a reinvented bunch of Chinese favorites will find a lot of interesting things to try at Ping Pong Diplomacy. The dishes here are undoubtedly unique and creative, but if you’re in the mood for straightforward classic Chinese food, this isn’t the place you’ll find it. If you’re looking for modern takes on Chinese classics however, then you’ll probably enjoy the experience here. Personally, I definitely think Ping Pong Diplomacy is worth a try at least once if you’re in the area. (Their burgers are a tasty takeout option.) The food here is neither cheap nor overly expensive, and I would say that most dishes are fairly priced for what you get. That’s a good thing given its location. It may not be my favorite Asian fusion restaurant, but I can’t say I didn’t enjoy the tasty food. There are a good number of stars up there, as you have seen.

Well, that’s it for today. Let me know if you’re tried this place out and what your favorite dishes are!

Full disclosure: This post is partially sponsored thanks to the GC I received from the Tasteless Group’s Marketing Team. However, all opinions stated above are my own. Truly.

Ddos Attack On WordPress, How To Prevent Your WordPress Site From Ddos Attack