MAY THEY ALL SUFFER GREATLY WHEN TRUMP DOES NOTHING TO HELP THEM #DRAINTHESWAMP & SENDS THEM ALL TO WAR TO DIE IN WW3. TOTAL ASSHOLES!

After prayer for national unity, Georgia electors vote for Trump 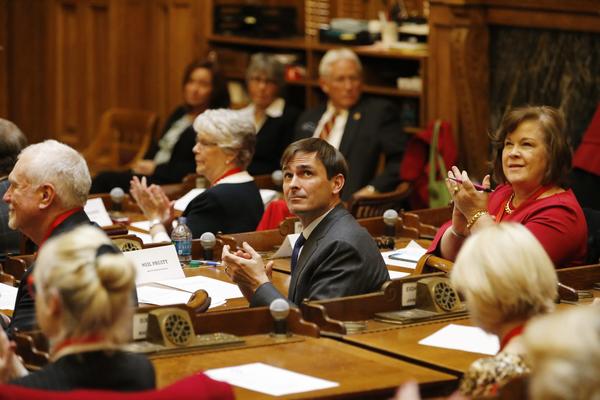 Outside the Georgia Capitol today, some may have held a flicker of hope that a GOP elector would refuse to cast a ballot for Donald Trump as 45th president of the United States.

Yet among the inner circle of Republicans who gathered inside the cozy, wood-paneled Senate chamber, there was little doubt about what would unfold.

One by one, all 16 electors -– dressed in formal business suits and red dresses, bow ties and blazers — cast their ballots for the contentious Republican candidate.

It was a short ceremony, with little opportunity for disruption. Security guards prevented the public from entering the chamber, cordoning off the hallway outside the room with a red rope and locking the main door before proceedings began.

The electors chosen by Georgia’s Republican Party included well-connected attorneys and real estate agents, a high school teacher and a farmer. As they waited for the gathering to begin, many snapped selfies and waved at loved ones above in the upper gallery.

After a call to order by the Georgia Republican Party chair, the electors bowed their heads, and Rachel Little, an elector and grass-roots Republican organizer, delivered an invocation.

“Lord, we know we are a divided country right now,” she said. “We pray that you will unite us. … We pray that [those who oppose Trump] will see our conservatism lived out in a gracious way.”

In a short speech, Gov. Nathan Deal hit out at activists who had bombarded electors with emails, letters and phone calls in an effort to sway their votes.

“You have been the subject of harassment by those who perhaps are not as dedicated to the proposition of what this body is supposed to do as they are agitated by the fact that the people didn’t do what they wanted them to do.”

“I have every confidence you will not succumb to that,” Deal told the electors. “My words to you: Do your job.”

Shortly before the electors cast their ballots, Rep. Barry Loudermilk, a Republican who represents Georgia’s 11th District, took to the podium to present a short history of the electoral college.

“Our founders actually despised the idea of democracy because mob rule often results in a decision made out of pure emotion,” Loudermilk told the electors, after referencing the “noise” of protesters outside. “It does not result in good government. In fact, our founders often cited the historic trial of Jesus as how mob rule does not work.”

The electoral college was devised to protect the integrity of government, Loudermilk said.

For a moment earlier this year, there was an inkling of a Republican revolt against Trump in Georgia. In August, Baoky Vu, a GOP elector based in Decatur, Ga., admitted he might not cast his ballot for Trump if he won. Within hours, however, he was forced to resign.

Trump went on to win 51% of Georgia’s popular vote.  On Monday, Vu did not show up at the Capitol, and he was formally replaced by a solid Trump backer, John Padgett, the chairman of the Georgia Republican party.

There seems little chance that Georgia legislators might vote to overhaul the electoral college. Earlier this year, Republican legislators authored two bipartisan pieces of legislation in Georgia’s House and Senate that would have made Georgia’s electoral votes based solely on the outcome of the national popular vote. Yet both bills stalled, and Republicans say there is little momentum to revive the debate.

“The system prevents the tyranny of the majority,” said Kirk Shook, an elector who is a high school teacher in rural Oconee County. He scoffed at those who, since the election, had sought to overhaul the electoral college system.

“There’s all this weeping and wailing and gnashing of teeth,” Shook said of those who opposed Trump’s win. “And rightly so. There’s going to be a Republican president, a Republican Congress and a Republican Supreme Court. With the stroke of a pen, 90 percent of what Obama considered his legacy will be gone.”

The post GEORGIA ELECTORAL MEMBERS ALL VOTE FOR TRUMP WHILE CALLING FOR NATIONAL UNITY appeared first on PAULA REVERE PRESS.