TRUMP IS RIGHT WHEN HE SAYS

OF WORKERS WHO BUILT CARS

ALL OF THAT IS GONE NOW AND WHAT IS LEFT?

HERE ARE TRUMP’S WORDS AND ALTHOUGH THEY MAY STING HE IS CORRECT ABOUT A GREAT MAJORITY OF WHAT HE SAYS:

“You live in your poverty, your schools are no good, you have no jobs, 58 percent of your youth is unemployed.”

Another truth is that Detroit is full of crime & drugs. Michael Moore, filmmaker, showed us the Detroit of today back in 2002 when GEORGE W BUSH, REPUBLICAN was President and it’s because of the GOP that Detroit now looks like a war zone.

Yes, trump is correct about how Detroit is now but he’s wrong that it was all because of DEMOCRATS.

But black American in any city in our country that is as destitute as Detroit Michigan is; its also because of them. Black America must START to see the error of their ways and STOP blaming WHITE AMERICA for their problems which are SELF MADE.

BLACK AMERICA WAKE THE FUCK UP ALREADY AND TAKE CONTROL OF YOUR LIVES. NO ONE IS GOING TO GIVE A FUCK ABOUT YOU IF YOU CANNOT TAKE ACCOUNTABILITY AND CONTROL OVER YOUR OWN COMMUNITIES.

STOP BEING ANGRY AT TRUMP – HES TELLING YOU HALF TRUTH’S – LISTEN TO WHAT HE SAYS AND THEN TAKE A CLOSE LOOK AT BLACK AMERICA THOUGHT THE AGES IN AMERICA.

YOU WILL SEE THAT DEMOCRATS HAVE BEEN YOUR GUARDIAN ANGELS ALL ALONG AND WITH CLINTON, SHE WILL LIGHT YOUR WAY AGAIN. SHE IS NOT THROWING BLACK AMERICA OR ANY AMERICANS UNDER THE BUS.

TRUMP WILL. HE’LL USE YOU LIKE HIS DESCENDANTS DID BEFORE HIM TO AID HIM IN HIS “TIME OF NEED” AND THEN DISCARD YOU; MUCH LIKE HE PLANS TO DO TO MEXICANS WHO VOTE FOR HIM.

THE TRUTH THE MEDIA WILL NOT TELL YOU IS

DONALD TRUMP DOES NOT WANT TO BECOME PRESIDENT

THERE IS NO MONEY IN THAT FOR HIM.

HE IS A LIFE LONG DEMOCRAT WHO IS GOOD GOOD FRIENDS WITH THE CLINTON’S. THEIR KIDS ARE GOOD FRIENDS. TRUMP IS THE GUY WHO HILLARY IS RUNNING AGAINST BECAUSE AGAINST ANYONE ELSE HILLARY CLINTON WOULD LOSE.

Angry protesters ready for Trump ahead of his Detroit visit 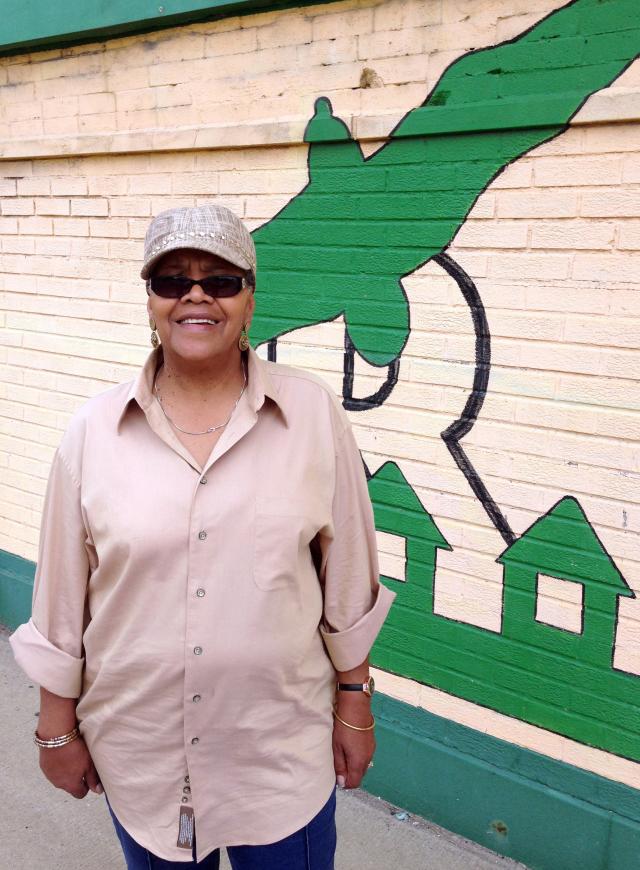 DETROIT (AP) – Toni McIlwain believes that as a candidate for president, Donald Trump has a right to go anywhere he wants. But, she says, it takes a lot of nerve for him to visit Detroit.

Many black people in the city, she says, are still stung by the Republican presidential nominee’s visit to Michigan last month, when he went before a mostly white audience and declared, “You live in your poverty, your schools are no good, you have no jobs, 58 percent of your youth is unemployed.” He asked, rhetorically, what blacks had to lose by voting for him instead of Democrat Hillary Clinton.

“People picked up on” Trump saying “you’re all just crap,” said McIlwain, who for years ran a community center that offered education and drug prevention programs in one of Detroit’s most distressed neighborhoods.

“He generalized the total black community. How dare you talk to us like that and talk about us like that?” she said.

Trump was going to Detroit to make what appeared to be a late attempt to woo black voters roughly two months before the general election.

Unlike his usual campaign stops where he confidently addressed mostly white crowds that supported him and his plans for the country, Trump’s visit was intended to be more intimate.

He was to attend a service Saturday at an African-American church, but was expected to address the congregation with only a brief greeting. He was scheduled to record a private interview with the church’s pastor, Bishop Wayne T. Jackson, and take some kind of tour with his former rival, Detroit native and retired neurosurgeon Ben Carson.

Carson, who has been advising Trump’s campaign, told The Associated Press that the trip would serve as an opportunity for the GOP nominee to see the challenges residents face as he refines his policy plans.

“It always makes much more of an impression, I think, when you see things firsthand,” he said. 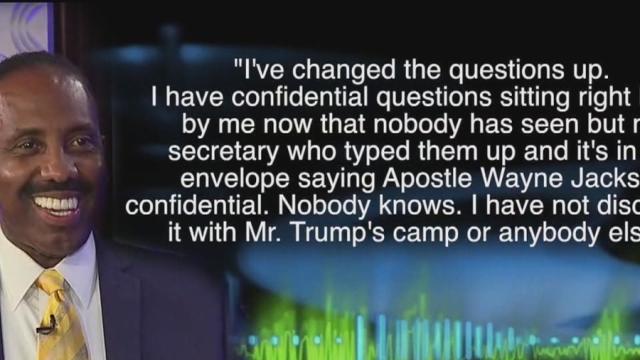 Bishop Wayne T. Jackson on Donald Trump’s visit to his Detroit church: “I am not an Uncle Tom”

When Bishop Wayne T. Jackson records a closed-door interview with Donald Trump Saturday to air on Jackson’s Impact TV network next week, the presidential candidate will know some of the questions.

But the risky nature of the visit was underscored by what appeared to be unusually cautious planning by the Trump campaign.

On Thursday, The New York Times published what it said was a script of pre-approved questions Trump would be asked in his interview with Jackson, along with prepared answers.

Jackson told CNN on Friday that he “didn’t see anything wrong” with clearing his questions with the campaign and hadn’t offered softballs. Trump’s intention was to meet and speak with local residents while he’s in town “because he’s been criticized,” Jackson said, “for preaching to African-Americans from a backdrop of white people.”

Protesters waited for Trump outside the church Saturday, where some tried to push through a barrier to the parking lot but were stopped by church security and police.

Rev. Horace Sheffield who led a march from his church blocks away said: “I walked up to the gate and said I was going to church. I was immediately confronted and was told I needed a ticket. You need a ticket to get in church? Anybody who is in this church should be appalled. I love Bishop Wayne T, but to not let the public in?”

Among the members of the clergy denouncing Trump’s visit was the Rev. Lawrence Glass, who said Trump’s heart was not into helping blacks.

Glass said Trump represents “politics of fear and hate” and that “minorities of all kinds have much to lose taking a chance on someone like” Trump.

Detroit is about 80 percent black, and many are struggling. Nearly 40 percent of residents are impoverished, compared with about 15 percent of Americans overall. Detroit’s median household income is just over $26,000 — not even half the median for the nation, according to the census.

The city’s unemployment rate has dropped, but is still among the highest in the nation. And public school students have lagged behind their peers on statewide standardized tests.

Trump was received warmly Friday by a group of African-American business, civic and religious leaders during a discussion in Philadelphia. But others, like Ryan Boyer of the city’s Labor District Council, rebuked him, saying Trump “has no prescription to help inner-city America.”

“You don’t invite the devil into your house,” Lewis said. “He’s a racist. He can’t help nobody. I don’t think he has enough ability to run the country.”

“He left us out and he wants to make up for that,” she said. “But it’s a little too late.”