We're giving a score of "decent" for the recent Holiday Bundle offered to MacGameStore.com members (yeah, see, we DO TOO cover games for the Mac!). The price is cheap, and the games are a mixed bag.

For the low, low price of just 24.95 (seriously, that's like, what? less than half of a PS3 or Xbox 360 game? Ever tried playing half a game?), they offered up a total of 12 digital downloads, including the bonus, Jewel Quest III, because they went over some kind of minimum order requirement that we can't quite remember right now (too much eggnog over the holidays, you ask? Well, it may just be so).

Okay, so, what you get, broken down:

Some decent puzzle games, which come in two basic groups: narrative "storyline" scenarios and the "match three or more of the same colored things" games we've all seen before. 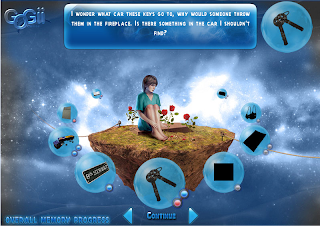 hey, you, get off of my cloud

The best of the bunch of the first kind is about an amnesiac who won the lottery and then was attacked. Though the resolution isn't really surprising (spoiler: the husband's a rotter), Hidden Secrets: The Nightmare is full of challenging gameplay.

First of all, you've got lots of "get the tools and then figure out how to use them" puzzles to solve, made more difficult because:

Redeeming feature: this game includes a truly diabolical puzzle section with matchsticks that just boggles the mind. Really. At some points, the only thing stopping you from hurling your laptop out the window as you try to create less squares with more matchsticks is that elite Mac price tag, IFKWIM. AITYD. Oh, and it's timed.

Definitely worth the price tag for that game alone, if you ask us. But there's also Escape from the Museum, with a very similar concept (and yes, the same occasional blurry animation problems) but different puzzles to solve.

For example, there's loads of "find ten of these" screens, and some old-school puzzles reminiscent of that newspaper deal where you get two pictures and you have to figure out what's different between them. Solving puzzles in some rooms unlocks more rooms in the museum, which is frickin' huge by the time you're done. Another good value.

Then, there's the match 'em up puzzles, like Jewel Quest III, which is of course a fine game, and Deep Blue Sea, which is okay, mostly because it has mermaids in it.

Next, you got your "Rip Off The Game Show" type games, Wheel of Fortune Deluxe and Trivia Machine (Wow. Did we even play that second one? Don't think so. We'll have to give it a look).

Then, there's the "OMG, the customers are going to riot!" games that make you scurry around like a madman to satisfy your clientele, expertly preparing you for your future life in customer service. You know, like the classic Diner Dash series.

We have to admit, we're a sucker for those, which no one else around here seems to get at all. But judging from the popularity, we can't be on our own, can we?

cowboys eat a lot of burgers

Refreshingly, Burger Shop introduces both psycho clowns and bacon-cheeseburger-eating aliens (yes, really) to keep the action lively. We had hours of fun with Burger Shop, trying to perfect the levels. If you're a Diner Dash fan, you will too. 'Nuther good value.

You've also got an eye-straining pixelated deal called Neon Tango, which even MacGameStore.com found hard to describe. Here's what they came up with:

Pixelated Warrior, Defender of the Bytes! Launch your cybership into battle against the forces of chaos across 50 stages of bitmapped treachery overflowing with glowing enemies and pulsating bosses. Conceived with a gorgeous minimalism, Neon Tango licks the shoot-em-up genre down to its chewy abstract center.

Gorgeous minimalism, that's a nice turn of phrase. We've got to give props on that description, but the game gave us all headaches.

Lessee, what else? Oh, there's Feeding Frenzy, which is just dismal. Not really worth the time.

You want more of a description than that?

A waste of good sushi

Here it is: fish eat little fish to get bigger, while avoiding fish that are bigger still.

See? We warned you.

Lastly, there's Escape from Paradise. The name had us thinking (hoping) it was another of the puzzle games at first, but nope.

In EfromP, You're a survivor of a cruise ship that wrecked ('cause, oh yeah, that happens all the time), and you have to find a way off the island along with your other castaways, who for some reason are perfectly willing to do all the hard work you assign them, while you play fun minigames. Pretty standard fare all around, if a little repetitive.

So, summing up: Stick with the puzzle games, and the bundle is well worth the (meager) $24.95 price tag.

Oh, and definitely ditch Feeding Frenzy first chance you get.