Here are the latest scheduled game releases, straight from Natsume:

Adventures To Go (PSP)
It's adventure served your way! In this hilarious and innovative
strategy RPG, players take control of Finn Courtland and his band of
misfits in their quest for fame and riches. Each dungeon is randomly
generated according to the player's specifications, so the game offers
endless replayability and a guarantee of new surprises every time
players pick it up. The grid-based battles challenge players to think
strategically and make the best use of each character's abilities.

Animal Kingdom: Wildlife Expedition (Wii)
In Animal Kingdom: Wildlife Expedition, players take on the role of a wildlife photographer exploring the exotic and diverse wildlife of Animal Island. Each day, they'll be given new photo assignments, such as taking pictures of particular animals, an animal herd, or an animal
in a particular pose. Players will see a variety of exotic wildlife on their expedition, including gazelles, gorillas, and elephants. Each animal is realistically detailed and behaves just like the real thing! 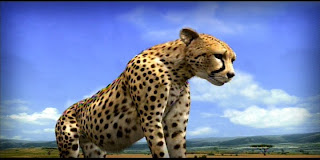 Afrika (PS3)
Explore the wildlife of Africa in this revolutionary safari game! Players will capture lifelike images of everything from lions and zebras to giraffes and cheetahs in this breathtaking PlayStation® 3
game that features photorealistic environments and animals that move and behave exactly like their real-world counterparts. Like real-life
photographers, players will need to be careful if they want to take photos of the animals without disturbing them, and make the best use
of their equipment in order to capture that perfect shot. The photography in the game is as meticulously modeled as the animals themselves; players will need to learn to compose their photographs with the eye of a professional photographer if they want to earn top dollar. Money can be used to purchase new licensed cameras and equipment, all of which behave just like their real-world counterparts.

Cheer We Go! (DS)
Take on the role of a cheerleader in this exciting rhythm adventure game! Use your stylus to guide your cheerleader through increasingly complex dances and cheerleading routines. The game's story mode takes players on an adventure through school as they try to work their way
up to star cheerleader! Players can completely customize theircharacter, enjoy a variety of mini-games, and may just find a little romance as they strive to become the best cheerleader in the school!

Harvest Moon: Animal Parade (Wii)
In Harvest Moon: Animal Parade, a divine tree which once stood in the middle of the Harvest Goddess' pond has begun to weaken, the creatures are beginning to leave the land, and the five bells have lost their power. Only the strength of the Harvest King can help revive the earth and bring the tree back to life. It's up to the player to ring the five bells, bring the Harvest King back to the island, and help revive the Goddess' tree and the land. Players will also help the ringmaster when the circus rolls into town. When the giraffe, hippo, and lion escape, players have to find them, befriend them, and bring them back to save the show! Players will find plenty of activities to experience in Harvest Moon: Animal Parade, including cultivating crops and caring for wild and exotic animals. Players can take their exotic pets out for walks, teach them tricks, and even ride them around town! 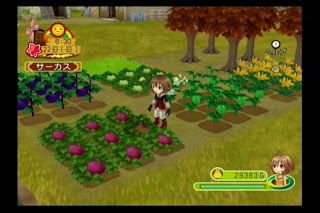 Harvest Moon: Frantic Farming (DS)
Something strange is happening on Sunny Island. Crops are popping up everywhere and growing out of control! If something isn't done soon, the once-tranquil island will be buried in an avalanche of vegetables! It's up to the players to solve the mystery of this produce predicament as they try to tame the crops and gather as many
vegetables as they can. Set in the world of the recent DS hit Harvest Moon: Island of Happiness, Harvest Moon: Frantic Farming continues the
tale of the island and its residents. Players can choose from 12 playable characters, each with their own unique story. See how the mystery unfolds from each character's perspective, and who they meet along the way. The game features a variety of modes including Story Mode, the brain-teasing Mission Mode, and the action-puzzle excitement of Score Attack and Free Play Modes. Players can test their farming skills against their friends and family in multiplayer. Players can also unlock character art, music, and some special surprises in the Collection Room.

Harvest Moon: My Little Shop (WiiWare)
Harvest Moon comes to WiiWare! You've just opened a shop in Clover Town. It's up to you to decide what items you're going to stock. Once you decide what to stock, you'll make the items in a series of fun and exciting minigames using the Wii Remote. Can you build a bustling business that will help Clover Town prosper? 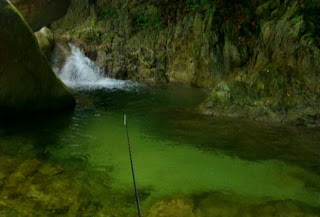 Reel Fishing: Angler's Dream (Wii)
Reel Fishing: Angler's Dream brings the most true-to-life fishing experience yet to the Nintendo Wii! Featuring a magnificent 3D fishing engine, lifelike fish, and soothing environmental sounds, Reel Fishing: Angler's Dream puts players on the banks of pristine lakes, raging rivers, and tropical oceans filled with the biggest, fiercest fish around. Players will be able to keep their best catches in aquariums, grow them, and then release back into the wild for an even bigger challenge. Get expert advice from the wise Fishing Master and learn how to fish like a pro. With a variety of realistic stages, tons of fresh and saltwater fish, and over 100 pieces of tackle, players can really make their fishing experience their own. Special Boss Fish will challenge even the most veteran anglers. Players can also take a more competitive approach to fishing with Versus Mode and compete with 1-4 other players. Players can try their hand at lure, bait, and fly fishing, using the WiiT Remote as a rod, and the Nunchuk as a reel. With all the sights, sounds, and action of real fishing, Reel Fishing: Angler's Dream is the closest you can get to the real-life fishing without putting on your waders!

Squishy Tank (DS)
Squishy Tank is a fun-filled puzzle adventure game! The gameplay challenges players to quickly match and destroy tiles before they run out of time. Wacky items and powerups keep the action fresh and exciting. The game also features a story mode that's sure to charm players of all ages with its whimsical characters and dialog.


This post first appeared on Fuel The Rebellion, please read the originial post: here
People also like
Lloyiso – Dream About You
Family-Friendly Activities in Caldera Springs, Oregon
The Best Honeymoon Places in the United States
The Time I Got Scammed For A Puppy
Travels through History – Northern Spain – Vigo
9 Greek Islands – Symi
Tchouameni: 'I could've taken the easy road but it's hard to say no to Real Madrid'
Top tips for safe diving, a water-powered battery and understanding Gaelic with ultrasound