All On Thirteen Reasons Why.

Let’s talk about 13 Reasons Why today.

Before you mention it, yes I’m jumping on the series of posts about this T.V. show on the internet and adding my own opinion to the plethora that exists and yes again, joining the debate that 13 Reasons Why has become.

For the unaware,13 Reasons Why is Netflix’s latest original series that went live on 31st March 2017 and has taken the internet by a storm.Netflix summarises the show as the following and I find it to be the best possible one-line summary for it so I quote the website directly.

“After a teenage girl’s perplexing suicide, a classmate receives a series of tapes that unravel the mystery of her tragic choice.”

Based on Jay Asher’s bestselling novel of the same name, the T.V. Show has been praised and lauded for bringing attention to mental health, growing up as a contemporary teenager and the impact seemingly little things can have on a person’s life.It has also faced lots of flak for dealing with delicate issues wrongly and in a graphic method that could be more harm than good.While I understand both sides of the discussion and what they’re getting at, I’ll state my own opinion here which can be considered as a middle ground of sorts between the two sides of the discussion.

A little background information first, I read the Book when I was 14, loved it and was so happy to hear that it was being made into a T.V. show via Selena Gomez’s Instagram account. (She is an executive producer on the show.) I had loved the book and it didn’t seem to be a popular book among the people I met and thus it made me proud to see it being made into a show, something more mainstream and something that would reach out to a wider audience.

Now, let’s get out of the flashback zone and come back to right now, that is in layman talk, let’s talk about the show and ask the real questions.How did I find the show itself without knowledge of the book or story? How did I find the show as a book fan? Did it live up to my expectations? Would I recommend it? Or, would I not and if so, why not? I’ll answer each of these, one by one, so hang on and let’s get going.There will probably be spoilers ahead, so read at your own discretion, you’ve been warned.

I loved the show.I’m just going to state this and put it out there.It was an emotional journey, it was hard, painful, made me feel extremely helpless and was so nerve-wracking to watch, but I loved it.As someone who is in the process of graduating from high school, I loved how real, how diverse and how representative the show was. Of course, there are little things that are a little over the top or exaggerated but this remains the truest to life high school based show I’ve seen till now and I am a huge fan of that.High school can be an absolute piece of shit at times, or rather, at many times and this show shows it as it is.They updated the story to be more believable in 2017 rather a decade earlier as in the book and with those changes they have managed to capture the essence of the second wave millennial teenager a.k.a my generation.

I found the show to be very well made if that makes sense.It was neat,there was one episode for each chapter of the book (13 to be precise, after all the show is called 13 Reasons Why.) ,the casting was so perfect,music was beautifully incorporated and having one hour (Each episode was about an hour-long.) to explore one chapter offered it a great chance to go in-depth and add so much to every character’s story, a chance they took and made a legend out of.The book is entirely from the point of view of Clay Jensen, our cassette-tape receiving classmate and the other characters are only seen from his and Hannah Baker’s (That is, the person behind the tapes) eyes.The show showed how different characters were dealing with the tapes and their contents and added a bunch of storylines (For example, the entire plot with Hannah’s parents, them dealing with her suicide and filing a lawsuit against the school is entirely absent from the book.) which made it so much more fleshed out, painful and hard-hitting. The show has left many cliffhangers and has left possibilities for a second season, while there is only one book so if there is a new season it will take an independent path.

At the topic of characters, the one thing the show manages almost effortlessly is to make every character relatable. You relate to some characters more than the others, of course, but at some point you see yourself in almost every other character and you understand the situation of every character throughout the story, a sign of great storytelling.Take the person whose story ties everyone, Hannah, the new girl who has been singled out. You’ve been a Hannah or met a  Hannah in your life.This particular trait of the show is what makes it so hard to take in.It could have happened anywhere and most of it is happening in schools today and the show has the best message to give and it is best captured in two quotes from the story when Hannah says that,“You don’t know what goes on in anyone’s life but your own.” and when Clay with resolution, states that “It has to get better, The way we treat each other and look out for each other.It has to get better somehow.”  Basically saying that be kind and think about the consequences of your actions because you don’t know what that “little thing” you did might do to a person and his /her life.

The show has highlighted many important issues in an extremely graphic and as true to life as is possible manner and that is what has ended up making it the target of many controversies.It brings to the fore mental health, depression, rape, suicide, bullying and aggression in teenagers and in high schools.I thought it did an excellent job at showing just how scary and hard each of these things is to go through by making it hard to watch.It features two graphic rape scenes and one suicide scene, as a P.S.A. and for the detail oriented.While trigger warnings have been placed for each of these at the start of the episodes I feel personally responsible for warning you of these, especially the suicide scene.If you have been at such a place in the past but believe you can handle it please think again because those scenes are so so trigger-prone.I have been so blessed to not have struggled with any such thoughts in my life to date but after watching the show I had difficulty sleeping at nights and I couldn’t stop thinking about them. The suicide scene, which is only vaguely mentioned in the book to be a result of overdose has been altered to a much more visually graphic scene and watching Hannah, scream and cry and in pain, all alone as she does it was too much for me and I will honestly tell you, I  watched that scene through shut eyes, peeking though my hands, almost screaming and sobbing.On the matter of warnings, I cried several times in the show, which is also something I deem a necessary warning.So if you’re going into this, if you’re sensitive to these things, please be careful, please think before you watch and prepare yourself mentally.

What I appreciate about the kind of hype the show has the most is the attention it has brought to mental health which has always been a taboo and something no one wants to talk about. It was high time mainstream media talked about it and now, as a result, so many people are.Its existence is important for every teenager watching it and the reason so many are is that everything down to the promotion(The Instagram account of the show, @thirteenreasonswhy and the accounts made for the various characters are an excellent testimony to this fact.) was done so well. It will grip your mind and ask answers to questions no one is willing to answer, something that can be unsettling and something hard to take in.

Lastly, I would like to personally say that if you’re ever feeling like Hannah or having thoughts on those lines please click here to connect to someone who is waiting to hear your voice and your story.I’m always available too, if you want to talk and would never judge you or divulge your personal thoughts to anyone so please feel free to drop me a DM   (@musingsofawhimsicalsoul) or email ([email protected] and get in touch.I would love to talk to you. 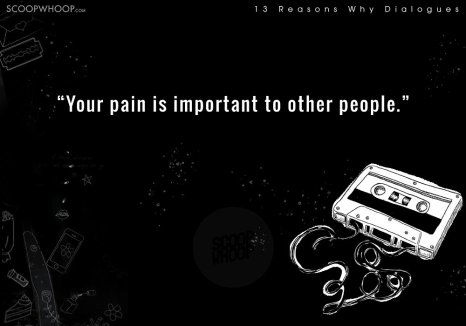 THIS POST’S QUESTION: What did you think of 13 Reasons Why?  Comment below with what you think about it,I’d love to hear from you!

Be a Guest Blogger On Musings Of A Whimsical Soul for May : Fill this form!

All On Thirteen Reasons Why.