SQL Server 2016 added new functionality of Java Script Object Notation (JSON) .As recent years other database has added this support in it. Microsoft launched this feature which is not similar to Native XML in Sql Server 2005 but they have create a simple and similar way to use it. 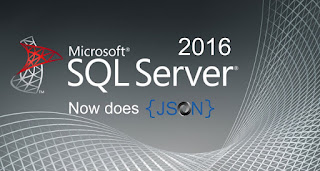 JSON has become popular text language to exchange the data between Web API.  JSON is also used for storing unstructured data in log files.
JSON
[
{ "name": "", "skills":["SQL","C#","Azure"] },
{ "name": "Jane", "surname": "Doe" }
]
SQL Server provides built-in functions and operators that let you do the following things.
·         Parse JSON text and read or modify values.
·         Transform arrays of JSON objects into table format.
·         Use any Transact SQL query on the converted JSON objects.
·         Format the results of Transact-SQL queries in JSON format.
Example :-
SELECT object_id, nameFROM sys.tablesFOR JSON PATH
I hope that the functionality of the above attribute is clear to you now. Now you can use this code in your application If you have further question, just drop a line below and I will try to answer you as soon as possible.
Last but not least, connect with me on Twitter, Facebook , LinkedIn and Google+ for technical updates and articles news. We won’t spam or share your email address as we respect your privacy.

Kraken OTC’s 8 out of 10 trades are i…
Top 11 Steps to Improve Your Page Loa…
Recruiter of the Month: Andrew Petrie
3 Ideal Apps for Gaming Chat
I Am a Member of Wealthy Affiliate – …

Recruiter of the Month: Andrew Petrie