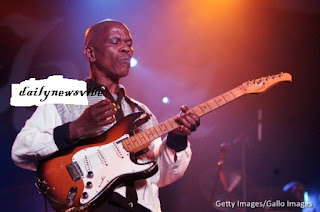 South African Jazz musician, Ray Phiri, who founded the band Stimela died on Wednesday from lung cancer at the age of 70 according to Vanguard.
The guitarist and vocalist, who was internationally known for his appearance on U.S. singer-songwriter Paul Simon’s “Graceland” album in 1986 died at a hospital in Mbombela in his native Mpumalanga province.
While paying tribute to the legend, President Jacob Zuma described the loss as a huge one for South Africa and the music industry as a whole.
Stimela’s best-known albums include “Fire”, “Passion and Ecstasy” and “Look, Listen and Decide”.


This post first appeared on JOSE KAY BLOG!, please read the originial post: here
People also like
What would happen to a modern-day Moses in America?
Thrilling Guided Tours on Bicycle of South New Zealand
The Best Romantic Honeymoon Destinations in the United States
Crime Tourism: Bringing Burglary Crews From South America To Affluent California Communities
Cambridge Mask Co. – Face Masks with the World’s No. 1 best filter technology
List of 10 Fastest-Growing Stocks under $5 Dollars 2022
Biden’s Ambitious Global Climate Agenda Is In Peril. Can He Save It?