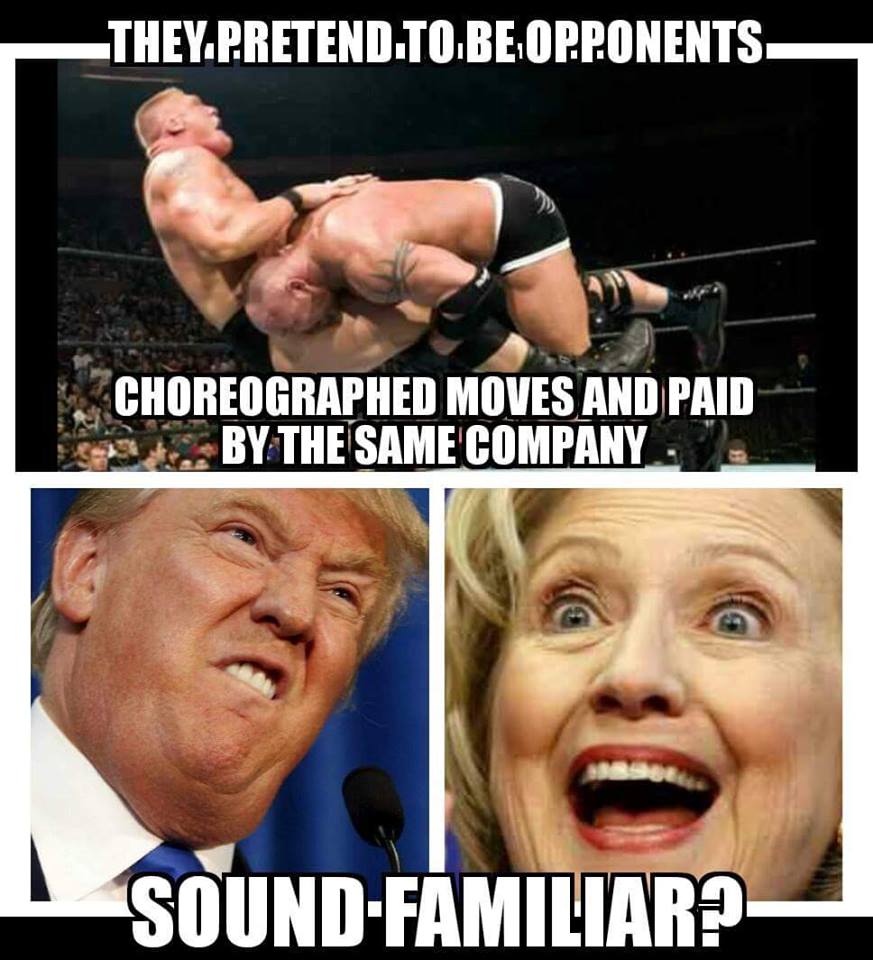 So here we are America.  Presidential election time.  It's looking like Trump Vs. Clinton for the keys to the Whitehouse.  But looks are very deceiving.  I've included this picture to show what is really going on.  To all the people who will vote for Trump and share his thinking on certain issues affecting America, your vote is really a vote for Hillary.  Trump never intended to be President.  He is a New York Democrat.  Same as Hillary.  His role was to come in as a Conservative Republican and say really crazy things that the Right would embrace and shake up the Republican Party.  But so many people agreed to his racist rhetoric, that Trump is now the Republican Nominee.He is now playing the game that Ronald Reagan started back in the 80's.  Liberal Democrat today Conservative Republican tomorrow and we as American people watch it happen right in front of our eyes.  As long as you know, America, a vote for Trump is a vote for Clinton.  Trump is here to make sure Clinton gets elected.  And, when she does, he will be richly rewarded.  So if you are on the right and really hate Clinton, voting for Trump puts Clinton in.  He took out everyone who could've taken her out.  Just like Pro Wrestling.  But don't feel bad for being tricked Right Wingers, America's Black Community has been fooled not once but twice by the Clintons.  First, it was Bill with all that he is "the First black President crap".  Bill sent more black men to prison with long sentences for low-level drug activity than any president in history and then had the nerve to apologize 15 years later.  The Clintons have thoroughly tricked us into believing they are for us.  Hillary has said she admires Margaret Sanger and Sanger has said blacks need to be exterminated like weeds.  And Margaret Sanger lived up to her comments by being the architect behind Planned Parenthood,one of the biggest killer of black babies ever seen.  So there you have it, the Clintons again or Trump with the mail order First Lady.  America, you need to follow my lead and vote for Deez Nutz!  The only candidate that is completely honest and has your best interest in mind.DEEZ NUTZ FOR PRESIDENT