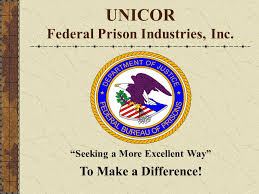 Unicor is a corporation that makes goods using Prison labor paying pennies an hour instead of minimum wage. My first experience with Unicor was in federal prison. I applied for Unicor for two reasons...First you need money in prison even if its only 100 bucks a month to eat with if the prison food keeps you sick with diarrhea and stomach cramps and secondly (Allegedly) i needed a secure area to produce and distribute football and basketball tickets for friendly wagers and fantasy opportunities for the compound.  ( some say my nickname was allegedly  LIL VEGAS) Now after some time Im called to go in Unicor not knowing what i was getting myself into. Once i was in i started to see what these outside companies were complaining about. Unicor employs prison labor to make all kinds of items such as clothes...furniture...solar panels...aircraft parts... computer accessories etc etc...and then sell to public businesses and corporations....Now if you own a mattress company and you pay your workers minimum wage but your competition sells the same mattress that you do but they pay their workers less than a dollar an hour how can your business compete ? These companies that produce the same products that Unicor produces can not match the worker pay scale that the prison pays out. So these companies go out of business not only for the pay reason but a lot of businesses that would normally do business with these companies are extorted by Unicor to stay with them....U know..They say we are the Govt if you go against us we will put our other agencies on you like the IRS.  So i always wondered why doesnt Congress or The House of Reps help these failing businesses out since Unicor is doing unfair pressure tactics and basically using a slavery mentality as their business model. THEN I FOUND OUT THAT THE OWNERS  OF UNICOR STOCK ARE MEMBERS OF CONGRESS AND THE HOUSE OF REPS....TALK ABOUT CONFLICT OF INTEREST...The same people that make federal law in America are prospering off federal slave labor in prison. How can a company compete in a free market system where one corp can pay cents on the dollar and the other has to pay minimum wage. They cant and when they go out of business thats more for Unicor.  So you have This Monster Corporation out here eating up all the competition with slave labor that is owned by our lawmakers who have to keep the prison full or lose money. Now Unicor has another function in the prison and that is complete compliance from its workers. You can not get in any type of trouble or you are out. 30 min lunch so the workers have to run to the chow hall ..eat ..and run back to keep your job ( got to keep that production line moving) They even force some to snitch on prison activity to keep their job..(Once someone found out  i was allegedly making those tickets in Unicor i was fired and it didnt take long)  Now to be totally honest once in the feds you must have a job but no one forces you to work in Unicor..You could work in landscaping....laundry...kitchen....plumbing..electric...etc...but those jobs pay about 5cents an hour and Unicor will start you around 75 cents an hour..The longer you work in Unicor the more you make over time. Even if you are in there for 20 years you still gonna make about 2 bucks an hour. But most sign up especially those with long sentences because after a year or two the money stops coming from home. But as inmates what do we do with the money we make? We give it right back to the Federal Bureau Of Prisons in the form of commissary. . Same thing we do on the streets at tax time.... Who do we spend our money with ? Right back to the ones oppressing us. Now there are some that save and send their money home. I meet a guy from Peru that told me he never goes to the commissary because he takes care of two families back home with his Unicor pay. But that is very rare. Once again we are destroyed by our spending habits even in prison. So im writing this blog post to inform and educate our young brothers and sisters that seem intent on taking that fast money route...The lets get paid quick mentality . With that mentality you will end up in the federal prison and in most cases you will work for Unicor.....AND THEN YOU WILL WISH TO GOD YOU HAD THAT TYPE OF WORK ETHIC ON THE STREETS CAUSE IF YOU DID YOU WOULDNT BE IN PRISON IN THE FIRST PLACE !!!!!

It’s Me – Chapter 8
Hired an Autosleeper Duetto
Domestic Violence – It Affects So Man…
What is a Proxy Server, and How does …
Craig Wright the self-proclaimed “Sat…
Rodney Crawford Jr