The Structure Of Indian Economy

THE STRUCTURE OF THE ECONOMY

The structure of Indian Economy consists of three broad sectors. They are
The nature of these sectors is as follows

1. Primary sector
It is Primary stage in economic development. It is exclusively relating to agricultural sector. It is
characterised by farm economy. It is the first sector of the Indian economy consisting of agriculture, animal husbandry, dairying, forestry and fisheries. It was the first and the oldest form of activity known to man everywhere. These occupations are primary because they are the oldest occupations and many other sectors of the economy are depending on primary sector. Because of this it received major attention of the Government and Five Year Plans. is the sector of livelihood for any economy. In this stage the GNP and per capita income are low. 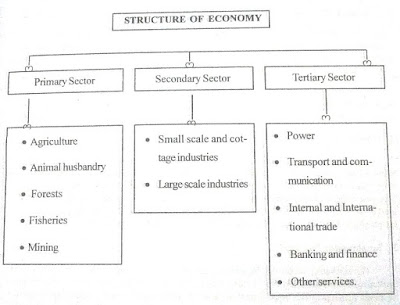 2. Secondary Sector
lt is the secondary stage or called industrial sector It is characterised by the industrial orientation of the economy. The secondary sector of the economy consists of small scale and large scale manufacturing industries. These are secondary to primary occupation. This stage
commenced last phase of primary stage where production process mechanised This stage of economy shows upward trend in GNP and per income. The industrial sector is again divided into three sub sectors namely large scale, medium scale and small scale. scale industries include cottage industries and village industries. The mixed economy consists of private sector, public sector and joint sector. Industries depend upon agriculture to a considerable extent for raw material and for their markets

3. Tertiary Sector
It is also called as service sector, a third stage of economic development. It is characterised by its technological orientation. The word tertiary means third in order. This sector does not produce physical products but produces services. Hence, it is also called as service sector. These services include railways, roadways, banking and fiinsurance, transportation, tourism, healthcare services, recreation and entertainment, communication, internet and international trade, power, etc. Several companies have emerged to undertake service activities. cannot For instance, transport is essential for marketing of goods and hence modern economy exist without an efficient system of transport. Similarly, communication services help in removal of barriers between regions.

The Pros and Cons of InShot App Free …
OpenPose Reviews: What it is, How it …
Best Coffee Beans – Everything You Ne…
The Happiness Cart – Falooda Express
The World Needs More Furry Bloggers

The Structure Of Indian Economy