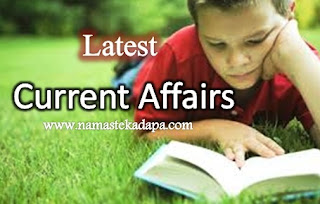 1. Which of the following country has highest Foreign Exchange Reserves in the World?
1) China
2) Japan
3) Switzerland
4) Saudi Arabia

3. Aparna Popat is associated with which of the following games?
1) Hockey
2) Cricket
3) Tennis
4) Badminton

6. Find the incorrect statement?
1) Ananya Vinay is an Indian-American student has won the 90th Scripps National Spelling Bee competition by successfully spelling "marocain".
2) Real Madrid football club has won the 2017 UEFA Champions League football competition by defeating Juventus 4-1 in the final.
3) Telangana state has become the India's first state to launch single-women pension scheme.
4) Brand finance in its 2017 report that lists India's 100 most valuable brands has named Reliance as the most valuable brand in India at an estimated brand value of $13.1 billion.

10. Which of the following term is NOT associated with Cricket?
1) Free Hit
2) Googly
3) Night Watchman
4) Banana Kick

12. Which of the following is correct regarding Global Peace Index 2017?
A. Global Peace Index (GPI) is the product of the Institute for Economics and Peace (IEP).
B. Iceland and Syria are in first and last positions out of 163 countries.
C. India's rank is 137th.
Which of the above statements is/are correct.
1) A only
2) B only
3) C only
4) All A, B & C

16. The Goods and Services Tax (GST) Council recently cleared the pending rules for the roll out of the new indirect tax regime from July 1. The GST rate for gold has been fixed at
1) 1 percent
2) 2 percent
3) 3 percent
4) 4 percent

19. The Institute for Development & Research in Banking Technology (IDRBT) is established by the Reserve Bank of India (RBI) in 1996. IDRBT is located in…..
1) Chennai
2) Bengaluru
3) Kolkata
4) Hyderabad

20. India is NOT member country of….
1) Association of Southeast Asian Nations (ASEAN)
2) Asia-Pacific Economic Cooperation (APEC)
3) Organization of the Petroleum Exporting Countries (OPEC)
4) All of the above

21. Who are the winners of Men's Doubles in French Open 2017?
1) Ryan Harrison and Michael Venus
2) Santiago Gonza lez and Donald Young
3) Rohan Bopanna and Robert Farah
4) None of these

22. Who are the winners of Women's Doubles in French Open 2017?
1) Bethanie Mattek-Sands and Lucie Safarova
2) Ashleigh Barty and Casey Dellacqua
3) Gabriela Dabrowski and Anna-Lena Gronefeld
4) None of these

23. Who among the following is NOT a Tennis player?
1) Stanislas Wawrinka
2) Novak Wawrinka
3) Rafael Nadal
4) Magnus Carlsen

24. Who has been selected for France's highest civilian award "Legion of Honour" for his outstanding contribution to cinema and theatre?
1) Soumitra Chatterjee
2) Shankha Ghosh
3) Raghuveer Chaudhari
4) None of these

25. Who is the author of the book "Indira Gandhi: A Life in Nature"?
1) Sonia Gandhi
2) Rahul Gandhi
3) Jairam Ramesh
4) Manmohan Singh

26. Who is the recipient of 2017 Kalinga Literary Award?
1) Mahabaleshwar Sail
2) Haraprasad Das
3) Surinder Verma
4) None of these

27. The Insurance Regulatory and Development Authority of India (IRDAI) recently took over the administration of which of the following insurance company?
1) Birla Sun Life
2) Sahara India Life Insurance
3) Tata AIG
4) LIC of India

28. Which of the following is correct regarding Vyas Samman?
A. Vyas Samman was first awarded in 1991.
B. It is awarded annually by the K.K.Birla Foundation.
C. Rishabh Jain is the recipient of 2017 Vyas Samman for his autobiography 'aadhe adhure'.
1) A only
2) B only
3) C only
4) All A, B & C

34. Which Indian state has highest number of child labourers, as per latest Child Rights and You (CRY) report 2017?
1) Uttar Pradesh
2) Bihar
3) Maharashtra
4) None of these