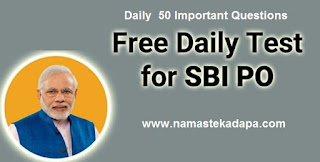 01). Which of the following country has launched a new cargo service connecting Tibet and Nepal?
a) India
b) Sri Lanka
c) Pakistan
d) China
e) None of these


03). Vistaar Financial Services, an MSME-focused financing firm has appointed _______ as non-executive Chairman and Independent Director.
a) C B Bhave
b) Sri Radha Mohan
c) Madhukar Gupta
d) Manoj Bajpai
e) None of these


04). Nana Akufo-Addo was elected as the President of which among the following countries?
a) Burkina Faso
b) Togo
c) Liberia
d) Benin
e) Ghana


05). Documentary, “Raising the Bar” has won the Award of Recognition at Australian film festival. The documentary is directed by
a) Onir
b) Biju
c) Chrik
d) Weng
e) None of these


06). President Pranab Mukherjee has launched a “100 Million for 100 Million” campaign organized by the KailashSatyarthi Children’s Foundation at which among the following Indian cities?
a) Mumbai
b) Pune
c) New Delhi
d) Kolkata
e) Hyderabad


07). Internet and Mobile Association of India (IAMAI) has constituted a working groupon fighting online piracy. Who among the following is the chairman of the committee?
a) Ajit Mohan
b) Kiran Shankar
c) Vijay Karan
d) Mathokar Sanjay
e) None of these


08). The Narmada SevaYatra has been launched by which of the following states?
a) Maharashtra
b) Chhattisgarh
c) Madhya Pradesh
d) Andhra Pradesh
e) Uttarakhand


13). Antonio Guterres, who has been sworn-in as the new Secretary General of the United Nations, is the former Prime Minister of which country?
a) Malaysia
b) Portugal
c) France
d) Singapore
e) Switzerland


14). Who has been named as the new Prime Minister of Italy?
a) Mario Monti
b) Enrico Letta
c) Matteo Renzi
d) Ramano Prodi
e) Paolo Gentiloni


17). Which of the state has launched the website APEDB to provide repository of knowledge on investing?
a) Haryana
b) Maharashtra
c) Andhra Pradesh
d) Madhya Pradesh
e) Himachal Pradesh


23). Who among the following has presented the Shilp Guru Awards and National Awards to master crafts persons for the year 2015?
a) Narendra Modi
b) Pranab Mukherjee
c) Arun Jaitely
d) Venkaiah Naidu
e) None of these


24). Who has been appointed as the as the new director of National Gallery of Modern Art (NGMA)?
a) Arjun Singh
b) Adwaita Gadanayak
c) Rajesh Verma
d) Radha Krishnan
e) None of these


25). Who became the first Indian to win a medal at the Mr Olympia event?
a) Iqbal Sayeed
b) Mahamood Saheb
c) Akram Basha
d) Vijayendra Bhoopati
e) None of these


28). Who among the following will chair an important meeting with senior officials from Jharkhand in connection with digital cashless payment?
a) R. S. Sharma
b) Sudhir Gupta
c) Amitabh Kant
d) Kshatrapati Shivaji
e) None of these


29). Who among the following appointed as the new chief of ISI?
a) Rahul Sharif
b) Javed Jamsheed
c) Rijvana Aktar
d) Naveed Mukhtar
e) None of these


30). Who among the following appointed as UNICEF Goodwill Ambassador for stellar work in child rights?
a) Deepika Padukone
b) Priyanka Choopra
c) Katrina Kaif
d) Anushka Sharma
e) None of these


31). Who among the following football players win the prestigious Ballon d'Or award for a fourth time?
a) Cristiano Ronaldo
b) Lionel Messi
c) Tom Bardey
d) Russel Wilson
e) None of these


32). Who won the World Billiards Championship held in Bengaluru recently?
a) Geet Seti
b) Francisco Bustamnte
c) Pankaj Advani
d) Semih Sayagri
e) None of these


35). Grofers, the on-demand e-commerce mobile and web application, is opening up a new avenue for people to get cash delivered at home, by partnering with which bank?
a) Yes Bank
b) ICICI Bank
c) Axis Bank
d) HDFC Bank
e) None of these


36). Which among the following digital payment systems has partnered with major National Highways Authority of India (NHAI) toll concessionaries to enable cashless payments at all state, national and city toll plazas?
a) Oxigen
b) MobiKiwi
c) PayUMoney
d) Paytm
e) None of these


38). Who was posthumously named Brazil’s player of the year after a vote by fans?
a) Cristiano Ronaldo
b) Gareth Bale
c) Karim Benzema
d) Sergio Ramos
e) Danilo


39). Who has won the most improved player award at the Badminton World Federation’s annual function held in Dubai.
a) Saina Nehwal
b) Lee Xuirui
c) PV Sindhu
d) Carliona Marin
e) None of these


40). Who has been named as one of 15 Global Thinkers, Compiled by the Foreign Policy magazine?
a) Smriti Irani
b) Sushma Swaraj
c) Mammtha Benerji
d) Akilesh Yadav
e) Narendra Modi


41). Name the bilateral naval exercise between India and Russia.
a) EKUVERIN
b) SIMBEX
c) INDRA
d) LAMITY
e) None of these


43). India’s largest indoor sports arena will come up in which of the following states?
a) Assam
b) West Bengal
c) Kerala
d) Andhra Pradesh
e) Maharashtra


44). The book “Many Everests: An Inspiring Journey of Transforming Dream into Reality” has been authored by whom?
a) Ravindra Kumar
b) Kailash Satyarthi
c) Manav Kumar
d) Nitish Bharadwaj
e) None of these


45). Antonio Guterres, who has been sworn-in as the new Secretary General of the United Nations, is the former Prime Minister of which country?
a) Portugal
b) Singapore
c) Malaysia
d) New Zealand
e) Indonesia


46). The Union Cabinet, chaired by the Prime Minister, Shri NarendraModi has approved the protocol amending the agreement between India and Tajikistan for avoidance of double taxation and the prevention of fiscal evasion with respect to taxes on income. Who is the Prime Minister of Tajikistan?
a) Emomali Rahmon
b) Kokhir Rasulzoda
c) John Mogufuli
d) Kassim Majiliva
e) Noen of these


47). The Indian Railways tied-up with which bank to install at least 10000 Point of Sale (POS) machines using debit or credit cards at the Public Reservation System (PRS) counters of Railways?
a) State Bank of India
b) Punjab National Bank
c) Syndicate Bank
d) Indian Bank
e) None of these


48). Name the Mobile walletlaunched by Punjab National Bank that enables a smart phone user to undertake on line transactions using the money
stored in the wallet?
a) PNB KITTY
b) PNB CHITTY
c) PNB FITTY
d) PNB KRITTY
e) None of these


49). Who among the following appointed as the acting chief of Life Insurance Corporation of India?
a) S K Roy
b) VK Sharma
c) Vinod Roy
d) Mahesh Sharma
e) None of these


50). V G Kannan took charge as Chief Executive of which among the following National offices?
a) Children’s Film Society of India
b) Indian Bank’s Association
c) Press Council of India
d) Council of Scientific & Industrial Research
e) None of these

The Jon Gruden Case and Why the NFL S…
Building a Talent Pool in a Tight Mar…
COVID-19 Violations: First Fines Alre…
Hiking the Cinque Terre: All you Need…
Darjeeling Express Covent Garden