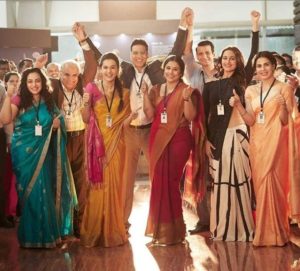 When one of ISRO’s GSLV launches in 2010 goes kaput, the Indian space organization assigns lead scientist Rakesh Dhawan and his team of mostly women scientists to work on sending a satellite to Mars, which in more ways than one, becomes their life’s only goal. After a lot of initial glitches, the team manages to accomplish their mission, but does it actually succeed?

Pic of the day : Shraddha Das | Telug…
Kestrel Lodge campsite
Can You be Too Old for Entrepreneursh…
فوائد الأرز البري لصحة الجسم
Five names for my depression

Akshay Kumar, who is currently Bollywood’s hot favourite when it comes to making films on national issues, is back in another patriotic drama that pays homage to Indian Space Research Organisation’s 2013 Mars Orbiter Mission (MoM). The freshly released part-fact-part-fiction ‘Mission Mangal’ is a tribute to Indian scientists, who worked relentlessly to launch a satellite into the orbit of the red planet, placing India in the list of selected countries to achieve such a feat and the only nation to do it in the first attempt itself. Director Jagan Shakti takes it upon himself to tell a story co-written by R. Balki, who is associated with narrating stories that tug at your heartstrings; but apart from the subtle ‘nationalist hints’ that the film gives out in almost every frame, there is not enough space and substance to propel this Mangalyaan saga forward.

In 2010, ISRO’s Rakesh Dhawan (a pun on Rakesh Sharma and Satish Dhawan, may be?) played by Akshay Kumar, heads a mission to send a rocket into outer space, which despite mission director Tara Shinde’s (Vidya Balan) expert supervision, develops a technical snag and fails miserably. Media backlash follows, which leads the heads at ISRO to put Dhawan in charge of another mission, which seems more like an unachievable task rather than a coveted operation. Dhawan is assigned the Mars Mission, where India is to send a satellite to the red planet, thus making it in the list of special nations. Although a low budget is stipulated and not enough time is allotted to accomplish the task, Dhawan and Shinde assemble a team of quirky scientists to begin work on Mangalyaan.

The teammates are dealing with problems of their own. Satellite autonomy specialist Neha Siddiqui (Kirti Kulhari) is a divorcee, who is battling religious hatred on a house-hunting spree. Propulsion engineer Eka Gandhi (Sonakshi Sinha) has plans to fly out to the US and does not shy away from casual one-night stands. Navigation and communication scientist Kritika Agarwal (Taapsee Pannu) knows duty is above all else, thanks to her injured Army husband. Lightweight satellite designer Varsha Pillai (Nithya Menen) doesn’t let her nagging mother-in-law get in the way of her professionalism. The team also has an aging structural engineer Ananth Iyer (H. G. Dattatreya) and an astrology fanatic Parmeshwar (Sharman Joshi), who work alongside the team of women to make India one of the forerunners in the space race.

When the mission picks up pace, almost all of the lead characters, at some point of time, decide to call it quits for personal reasons. But then there is the never-say-die Dhawan breaking into a song for every occasion to pep up the scientists, making them stay. And finally, after a lot of hiccups, the team is all set. But now the mission is not! And it is only when the industrious Tara Shinde has a puri-frying brainwave that the mangal mission is actually put on paper (or on the computers!). And like all other Bollywood movies, when all goes hunky-dory, how can a villain not show up? So here Rupert Desai (Dalip Tahil) a NASA-returned scientist turns up to mock ISRO in the face, which obviously the MoM team won’t take lying low. Ideas soon flare up like a rocket’s bottom and after a lot of physics and astrophysics mumbo-jumbo, ISRO’s mangalyaan is launched into space for the entire world to see.

‘Mission Mangal’ is an honest attempt at highlighting ISRO’s special achievement, yet with its ludicrous ways of explaining “rocket science” to its audience (who in no way are naïve these days), somewhat seems childish. Vidya Balan’s jugaadu Tara Shinde stretches the boundaries of imagination to use her life hacks to put a satellite into orbit, which to a certain extent is laugh worthy. Do scientists actually provide fellow scientists with solutions to physics problems with puris and cushion covers? Also, when there is an eclectic mix of people together in a frame, working for the one and only space organization in the country, a cultural diversity would have been something to watch out for. The over-simplified screenplay does not work in favour of the film. The CGIs are average and the extent to which the creative director goes to show national integrity through subtle green and orange hints is a bit too extra. However, there are some light moments in the film, when the characters are not frying puris or dealing with their background stories, which are some of the better aspects of the movie.

On the flipside, the actors deserve accolades for playing their part equally well. Despite lesser screen time, some of them (read Taapsee Pannu and Mohammad Zeeshan Ayyub in a cameo) do manage to shine. Akshay Kumar is the backbone of ‘Mission Mangal’ and is unarguably the best of the lot. Same can be said about Vidya Balan, who knows what is required of her in any script or scene you give her. Dalip Tahil, despite being the antagonist, brings on the laughs unintentionally. Sharman Joshi is good, while H. G. Dattatreya is in excellent form. Rest of the ladies from MoM do well in their respective roles.

Not totally bad and not very good, ‘Mission Mangal’ is a one-time watch, especially on Independence Day. But the only best part that comes out of the movie and which actually elicits a feeling of patriotism is the smartly-written dialogue “Poori duniya se kaho… Copy That!”

The post Mission Mangal Review{2/5}: Akshay Kumar’s Movie Is Not Accomplished As the Real Mars Mission appeared first on Eventznu.com.