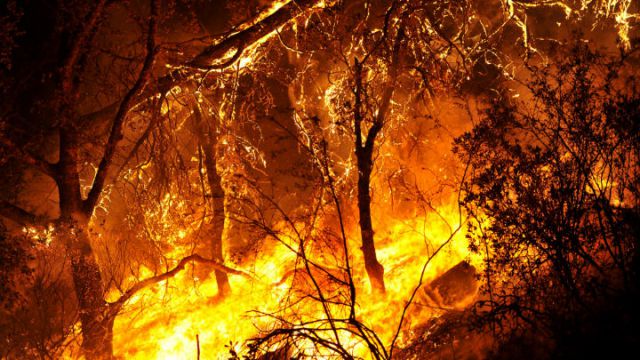 Thousands of homes remained evacuated Sunday as two massive wildfires raged in tinder-dry California hills and canyons, and authorities said a burned body was found in one neighborhood swept by the flames.

The body was discovered Saturday evening outside a home on Iron Canyon Road in Santa Clarita, just north of Los Angeles, and detectives are trying to determine whether the person was killed by the blaze or another cause, Los Angeles County sheriff's Lt. Rob Hahnlein said.

The home also may have burned, he said.

The area was among those ordered evacuated as the fire raged through brush withered by days of 100-degree temperatures as Southern California sweltered through a heat wave. Since Friday, the fire, propelled by gusty winds, has burned up and down ridgelines, blackening 31 square miles of brush on the edge of Santa Clarita and the Angeles National Forest.

After flames swept through an evacuated neighborhood, firefighters reported that some buildings had been engulfed, but it was not immediately clear whether they were homes, outbuildings or garages, said Nathan Judy, a spokesman for the U.S. Fire Service.

The area was still unsafe, he said late Saturday night.

"You've still got hotspots in that area, a lot of smoldering stuff," and trees that might fall because their roots had burned, Judy said.

Despite firefighters' efforts, the blaze destroyed sets at Sable Ranch in Santa Clarita, which has Old West-style buildings used for movie locations.

"It was a horrific firestorm," owner Derek Hunt told KABC-TV. "At some point, you know you're defeated and you have to step back and save what you can. We fought as best as we could."

Bengal tigers and a mountain lion were among several hundred animals evacuated Saturday as flames partially ringed the Wildlife Waystation, a nonprofit sanctuary for rescued exotic creatures in Sylmar. Volunteers showed up with trucks and trailers to help with the rescue. Later in the day, firefighters managed to beat back the threat.

More than 200 horses along with goats, rabbits and other animals also were removed from fire areas.

The fire was 20 percent contained Saturday night. More than 900 firefighters and water-dropping helicopters battled the flames overnight on several fronts.

"It's not a one-direction type of fire," Judy said. "It's going in different directions depending on which way the wind is blowing. It's doing what it wants."

Sunday's forecast called for low humidity with afternoon and evening winds gusting to 25 mph or more that could once again fan the fire's explosive growth.

About 300 miles up the coast, California Department of Forestry and Fire Protection firefighters battled a 10-square-mile blaze in rugged mountains north of the majestic Big Sur region.

The blaze 5 miles south of Garrapata State Park posed a threat to about 1,000 homes and the community of Palo Colorado was ordered evacuated, Cal Fire said.

Jerri Masten-Hansen said she and her husband watched the fire creep in toward them. "We felt threatened this morning and decided we needed to go," Masten-Hansen told KSBW-T.

Her sister also left her home down the road. "I grabbed all the pictures of the kids, and then I took the paintings of my parents that had been done by a local artist," Ellen Masten said.