Trump plans to expand offshore drilling in Pacific and Atlantic 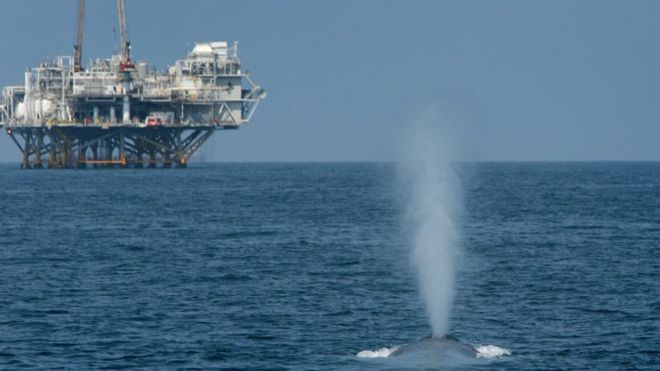 The Trump administration has proposed a controversial plan to open up protected areas in the Pacific and Atlantic oceans for offshore Drilling.
The five-year plan expands drilling to most of the US outer continental shelf, including California and Maine, where drilling has been blocked for decades.

How to Leverage Entrepreneurship and …
Woodlands Caravan Park
Empire of Language- Prelude-Metaphors…
Exhibit D: Lipstick and rifles--Ukra…
طريقة عمل بسكوت العيد في البيت
Environmentalists called it a "shameful giveaway" to the oil industry.
The move fulfils US President Donald Trump's promise to boost domestic oil and natural gas production.
US Interior Secretary Ryan Zinke unveiled the plan on Thursday, saying it would boost the US economy.
"This is a clear difference between energy weakness and energy dominance," he told reporters in a conference call.
"We are going to become the strongest energy superpower."
The Draft Five Year Outer Continental Shelf Oil and Gas Leasing Programme, which would be the most expansive drilling plan in decades, was immediately opposed by a coalition of 60 environmental groups, nearly a dozen attorneys general and more than 100 US lawmakers.
"These ocean waters are not President Trump's personal playground," read a statement signed by members of the Sierra Club, Natural Resources Defense Council, League of Conservation Voters and other environmental groups.
"They belong to all Americans and the public wants them preserved and protected, not sold off to multinational oil companies."
Republican House Speaker Paul Ryan called the announcement "great news".
Skip Twitter post by @SpeakerRyan
Report
End of Twitter post by @SpeakerRyan
Meanwhile, New Hampshire's Democratic Senator Maggie Hassan warned that offshore drilling has caused devastating incidents.
Skip Twitter post by @SenatorHassan
Report
End of Twitter post by @SenatorHassan
The Republican governors of Maryland, South Carolina and Florida oppose offshore drilling.
Florida Governor Rick Scott issued a statement saying he has asked to meet Mr Zinke to discuss his concerns with the latest plan.
"My top priority is to ensure that Florida's natural resources are protected, which is why I proposed $1.7bn for the environment in this year's budget," he said in a statement.
Democratic governors of the three US Pacific coastal states - California, Oregon and Washington - released a joint statement condemning the plan.
"For more than 30 years, our shared coastline has been protected from further federal drilling and we'll do whatever it takes to stop this reckless, short-sighted action," the statement read.
Mr Zinke's announcement comes a week after the Department of the Interior released a proposal to ease offshore drilling safety regulations that were created in the wake of BP's deadly 2010 Deepwater Horizon oil rig disaster.
The 87-day oil spill led to 11 deaths and a $20.8bn (£1.5bn) settlement, the largest environmental damage settlement in US history.
Mr Trump signed an executive order in April directing the interior department to reconsider a ban on offshore drilling imposed by his predecessor, former President Barack Obama.
The new plan will not immediately take effect and is expected to face challenges from several states.
"Nothing is final yet, and our department is continuing to engage the American people to get to our final product," Mr Zinke said.
Source: BBCNews

Trump plans to expand offshore drilling in Pacific and Atlantic