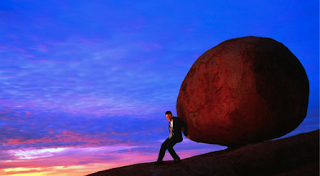 The word “persist” Simply means to continue working towards attaining your objectives, in spite of all Odds. As you can see, the word connotes stepping out of one’s comfort zone to make things happen. That dream of yours will not become a reality without a ‘fight’. As a matter of fact, many factors out there are out to nip your visions in the bud, if you allow them, of course.

Signs That You’re In A Healthy Love R…
A Comparison of the Environmental Imp…
Wanted man discovered living in Pilla…
Motivational Tips to Help You Stick …
CBD 2020: What to Expect + Our Top Pr…
You have more than enough reasons to continue in your quest (for success) than to throw in the towel. Things may not have worked according to plan, but does that warrant your chickening out? Remember you are in a competition, but this time with yourself. One part of you is telling you to give up that this isn’t going work; while another part is urging you, “Boy, come on. You are up to the task!” Which voice would you listen to?
Related: He Aimed High and Hit Mark
The success stories we are hearing today were men and Women who never knew what it meant to give up. They persisted until they made their mark. Thomas Edison once tried an experiment to invent the Light Bulb and failed at it for about 10,000 times. However, he eventually succeeded and gave the world a masterpiece of an invention. When asked about the times he failed in inventing the light bulb, Edison simply said, “I have not failed. I’ve just found 10,000 ways that won’t work.”
Top motivational speakers, entrepreneurs, captains of industries, sportsmen/ women and all causing waves in their various fields have one thing in common; they possess the grit to hang on until their set goals are attained. One of the best quotes to live by is, “Never let the odds keep you from doing what you know in your heart you were meant to do”. There will always be odds out there, but you’ve got to rise above them.
Nobody knows anything about those who gave up, we don't talk about them. The world only remembers winners and to become a winner you must never quit.
Stay inspired!
Image credit: roryvaden.com
Also read: How I Overcame the Challenge of Unemployment In Nigeria