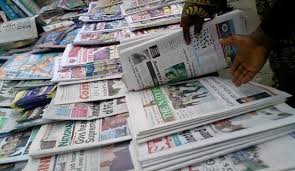 Reports making rounds in the country and elsewhere are captured in these dailies...