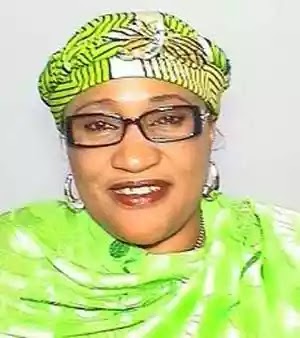 The Minister of women Affairs and All Progressives Congress (APC) candidate in the April 11 governorship election in Taraba State, Senator Aisha Jummai Alhassan, popularly known as Mama Taraba, has condemned the alleged abduction of 14-year-old Ese Oruru by one Yunusa, who hails from Kano. She vowed to ensure the release of Ese and prosecution of the abductor.

She maintained that Ese is a minor and as such cannot consent to marriage, stressing that ‘Child Rights Act says no person under 18 is capable of contracting a valid marriage, and a marriage so contracted is null and void’.

The former senator added that the Act prescribed a fine of N500,000 or 5 years imprisonment or both for anyone who violated it by marrying a minor.
“No culture, religion or personal conviction supersedes the laws of the Federal Republic of Nigeria. Ese Oruru must return home,” she vowed

“The case of Ese Oruru was brought to my attention yesterday and I have been looking into it since”.
“Our laws are very clear on the case, Ese Oruru is 14 and as such cannot consent to marriage. Any such union she’s in is illegal”.

“I have been in touch with the police authorities in Kano over Ese’s immediate release to her parents and we are making progess”.
“I can assure you that I will use all my powers and influence as a Minister and woman to secure the release and return of Ese Oruru”.

“Ese is still a child under our laws, and her right to freedom of movement is subject to parental control. She must be returned”.
“Child Rights Act says no person under 18 is capable of contracting a valid marriage, and a marriage so contracted is null and void”.

“The Act also clearly states that anyone who marries a child is liable to to a fine of N500,000 or 5 years imprisonment or both”.
“No culture, religion or personal conviction supersedes the laws of the Federal Republic of Nigeria. Ese Oruru must return home”.

“My ministry is on this case and we will ensure full prosecution of anyone who is found to have contravened the law”.
“Ese’s case has brought to the fore the need to protect the rights of children and women in our society and we wont relent”.

Vanguard gathered that Ese, who was 13 as at the time of her alleged abduction, was taken to Kano, by Yunusa, where he converted her to Islam and married her.

Ese’s parents had since last August made trips to Kano, where they unraveled the plights of their daughter. The parents said they have involved the police, but efforts to get the Emir of Kano, Mallam Lamido Sanusi, at whose palace the girl is believed to be held to resolve the matter and ensure the return of the 14-year-old to them have proved futile.

While her mother was told that Ese had converted to Islam and, therefore, was no longer her daughter, her father was told that his daughter was an 18-year-old adult and not 14, hence she was capable of making decisions for herself.