Gunmen ‘lined up non-Muslims for execution’ 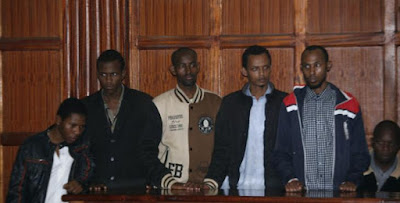 Survivors of a University Massacre in Kenya where Islamist Gunmen killed 148 people have recounted scenes of terror at a trial of five men linked to the slaughter.

The deadly attack at Garissa University in northeastern Kenya on April 2, 2015, was claimed by Somalia's al-Qaeda-linked Shebaab insurgents.

It was the East African nation's deadliest attack since the 1998 bombing of the US embassy in Nairobi.

Four gunmen involved in the massacre were killed, but five others have been charged with 162 counts of terrorism and conspiracy to commit an attack, with the trial underway in the Kenyan capital on Wednesday.

The five accused are Mohamed Ali Abdikar, Hassan Aden Hassan, Sahal Diriye and Osman Abdi who are thought to be Kenyan or Somali nationals, and Rashid Charles, a Tanzanian national.

They have denied the charges.

Speaking to the court in Nairobi, witnesses lined up to testify about the horror they had experienced as masked gunmen staged a terrifying pre-dawn assault on the campus, with their accounts detailed in Kenya's main newspapers.

While an early hearing was held in November, the main witnesses began giving evidence this week.

Addressing the court, Rispa Nyang'au said she was at a dawn prayer meeting with around 30 Christian students when she saw a “tall man armed with a rifle”, his face covered, hurl an explosive device into the room.

“I heard an explosion and saw sparks, before the man walked into the hall and started shooting,” she said, in testimony reported by the Daily Nation newspaper.

During the attack, the gunmen lined up non-Muslim students for execution in what President Uhuru Kenyatta described at the time as a “barbaric medieval slaughter”.

“I heard the door opening, they were spraying us with bullets and shortly after there was silence in the hall as most of my colleagues had fallen down,” said another student, Evelyn Chepkemoi, according to The Standard newspaper.

Chepkemoi, who was shot in the legs and hand, said she lay among the bodies of her slaughtered classmates, pretending to be dead for over five hours until the security forces entered the hall.

“I played dead for several hours before I was rescued,” The Star newspaper quoted her as saying.

On Thursday a leader of a mosque in Garissa gave evidence, describing how Charles turned up to prayers in the three days before the attack, adding he had not been seen there before.

The trial is set to continue Friday. Prosecution lawyers say they will call around 30 witnesses to give evidence.

Garissa University formally reopened this week, for the first time since the massacre, with most of the staff reporting for duty ahead of the new term. Around 60 students are expected to begin classes on January 11.

Gunmen ‘lined up non-Muslims for execution’