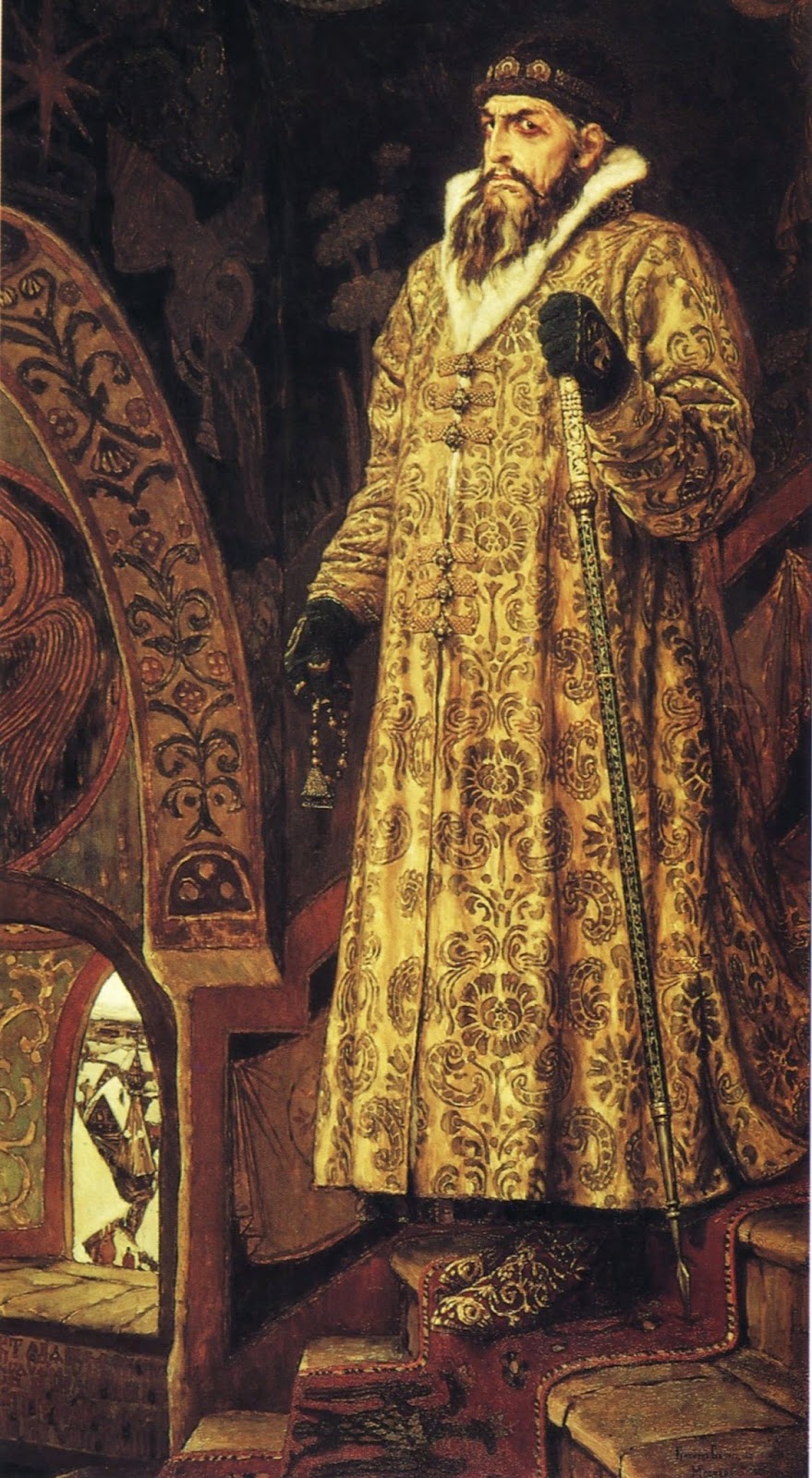 The grandson of Ivan the Great, Ivan Chetvyorty Vasilyevich, was born in August 25, 1530, in the Grand Duchy of Muscovy, Russia to member of the Rurik dynasty, His father Basil III, died when he was 3 tears old. His mother, Elena Glinskaya, ruled as regent until her 1538, when Ivan was 8. During this time, the realm rapidly degenerated into chaos as rival noble families (boyar) disputed the legitimacy of her rule. The court intrigue and constant danger that Ivan was exposed ti while growing up molded much of his ruthless and suspicious nature. Evidence indicates that Ivan was a sensitive, highly intelligent boy, neglected and occasionally scorned by members of nobility who looked after him after his parents death.
The hostile environment nurtured his hatred for he nobles, whom he suspected of being involved in his mothers death. He reportedly tortured small animals as a boy, yet still managed to develop a taste for literature and music.
In1547, Ivan IV was crowned tsar Muscovy. He was the first in the history of Russia, deriving the term "tsar" from the Latin "Caesar". That same year, he married Anastasia Romanovna, who later became the great aunt of the future first tsar of the Romanov dynasty. During 1549, he appointed a council of advisers, a consensus building assembly who helped institute his reforms. During what is considered the constructive period of his reign, he introduced a self government in rural regions, reformed tax collection, and instituted statutory law and church reform. In 1556, he instituted regulations on the obligations of the boyar class in service of the crown.
In foreign policy, Ivan had two main goals, to resist the Mongol Horde, and to gain access to the Baltic Sea. Ultimately aimed to conquer all remaining independent regions and create a larger, more centralised Russia.

In 1552 and1556, Ivan's armies crushed the Tartar khnates of Kazan and Astrakhan. This extended Muscovy control to the Urals in the east and the Caspian sea in the south, creating a buffer zone against the Mongols. He commissioned St. Basil's Cathedral in Moscow's Red Square, built between 1555 and 1561, to commemorate his success. However, he was not as successful at annexing Lithuania and gaining access to the Baltic. Despite his victories though, Ivan was starting to become less popular, due to some of his methods. He seized private lands and redistributed them among his supporters, and created a police force called the oprichnina, that existed more to crush dissent than keep the peace. Its was the first secret police of Russia.
Upon the death of his first wife in 1560, Ivan Vi went into a deep depression and his behavior became more erratic. His suspicion that had been murdered by the boyals only deepened hos paranoia. He left Moscow suddenly and threatened to abdicate the throne. Leaderless, the Muscovites, pleaded for his return. He agreed under one condition, that he would be granted absolute power of the region surrounding Moscow, known as Oprichina. He also demanded the authority to punish traitors and law breakers with execution and confiscation of property.
Over the next 24 years, Ivan conducted a reign of terror, displacing and destroying the major boyar families in his region, and earning the moniker by which he's now best known. During that period some of major atrocities took place, like beating his pregnant daughter in law, causing a miscarriage, killed his eldest son in a fit of rage when he lost a chess game, and gouged the eyes out of the architects of the St. Basil's Cathedral, so they would never replicate its beauty.

In 1584, with his health failing, Ivan the Terrible became obsessed with death, calling upon witches and soothsayers to sustain him, but to no avail. His end came on Match 18, of the same year, when he suffered a stroke. He had willed his kingdom to his unfit son Feydor who suffered from mental illness, whose rule spiraled Russia int the catastrophic Time of Troubles, and would not recover for over half a century later.
Ivan the Terrible is responsible for nearly three decades of cruel terror. At that time he and his secret police brutally killed over 220.000 people, while mutilation and torture was reduced to a routine. An entire nation fell into anarchy for many as a result of his policies, and because of the countless executions of the nobles, the economy plummeted, and wouldn't be restored until the rise of the Romanov's to power. 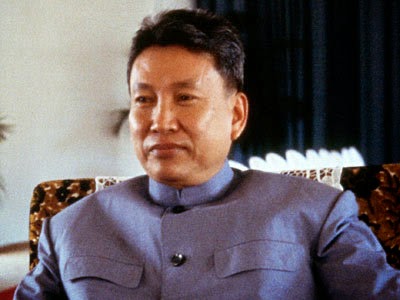 Saloth Sar. better known by his nom de guerre Pol Pot, was born in 1925 in the small village of Prek Sbauv, located about 100 miles north of the Cambodian capital, Phnom Penh. His family was relatively affluent and owned 50 acres of rice paddy, or roughly ten time the national average. In 1934 Pol Pot moved to Phnom Penh, where he spent a year at a Buddhist monastery before attending a French Catholic school. His Cambodian education continued until 1949, when he went to Paris on a scholarship. He studied radio technology and became heavily involved in communist circles. After three failed attempts to earn a decree he returned to Cambodia in January 1953.

At that time the whole Cambodian region was revolting against French colonial rule, and officially gained its independence later that year. Pol Pot, meanwhile, joined the proto-communist Khmer People's Revolutionary Party (KPRP), which had been set up in 1951 under the auspices of the North Vietnamese. From 1956 to 1963, Pol Pot taught history, geography and French literature at a private school while simultaneously plotting a revolution.
In 1960 Pol Pot helped to reorganise the KPRP 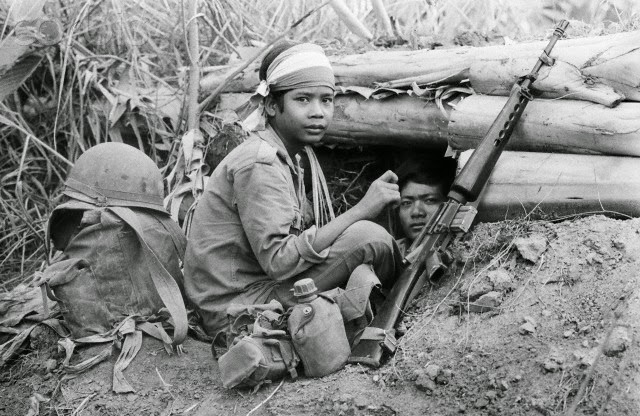 Once in power, Pol Pot begun a radical experiment, to create an agrarian utopia inspired by Mao Zedong's "Cultural Revolution". Mao's "Great Leap Forward" economic program included forced evacuations of  Chinese cities and the purge of "class enemies". Pol pot would now his own "Super Great Leap Forward" in Cambodia,  which he renamed the Democratic Republic of Kampuchea. He declared the Year Zero, and the "purification" of the Cambodian society. Capitalism, western culture, city life, religion, and the foreign influences were to be extinguished in favor of an extreme form of peasant Communism. All foreigners were thus expelled, embassies closed, and any foreign economic or medical assistance was refused. The use of foreign languages was banned, newspapers and television stations were shut down. Money, free markets, normal schooling, private and government property were abolished. Public schools, hospitals, pagodas, mosques, churches, universities, shops and government buildings were shut down or turned into prison, stables or granaries. Even parental authority was revoked, as Cambodia was sealed off from the outside world. 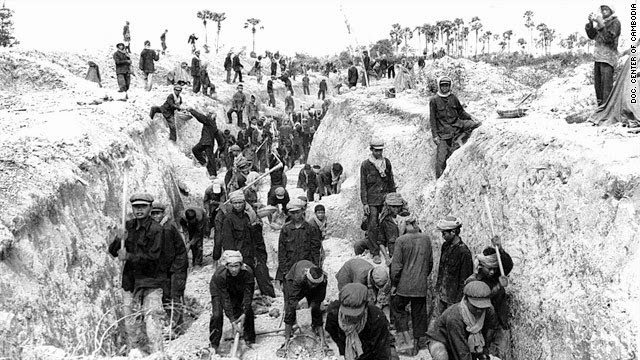 All of Cambodia's cities were forcibly evacuated. At Phnom Penh, 2.500.000 inhabitants were evacuated on foot into the country side. More than 30.000 died along the way.
Millions of Cambodian accustomed to city life were now forced into slave labor in Pol Pot's "killing fields", where soon began dying from overwork, malnutrition and disease, on a diet of one tin of rice (180 grams) per person every two days. Workdays in the fields began around 4 a.m. and lasted until 10 p. m. with only two rest periods allowed during the 18 hour day, all under the armed supervision of young Khmer Rouge soldiers eager to kill anyone for the slightest infraction. Starving people were forbidden to eat the fruits and rice they were harvesting, and after the crop was harvested, Khmer Rouge trucks would arrive and confiscate the entire crop. All work decisions were made by the armed supervisors, with no participation of from the workers, who were told "Whether you live or die, is not of great significance". every tenth day was a day of rest, and were also three days off, during the Khmer New Year festival.
Throughout Cambodia, deadly purges were conducted to eliminate remnants of the "old society". The educated, the wealthy, Buddhist monks, police, doctors, lawyers, teachers, and former government officials. ex-soldiers were killed along with wives and children. Anyone suspected of disloyalty to Pol Pot, including eventually many Khmer Rouge Leaders, was shot, or bludgeoned with hammers or axes. In the labor camps, unsupervised gatherings of more than two persons were forbidden, No discussions were allowed or showing the slightest affection, humor, or pity. Anyone who violated these rules was executed on the spot. Ethnic groups were attacked including the three largest minorities the Vietnamese, Chinese, and Cham Muslims, along this almost twenty other smaller groups, 50% of the estimated 430.000 Chinese living in Cambodia in 1975 perished,
Many were held in prisons, where were detained, interrogated tortured and executed. the most infamous prison in Cambodia, known as S-21, held approximately 14.000 prisoners, while in operation. Only 12 people survived. 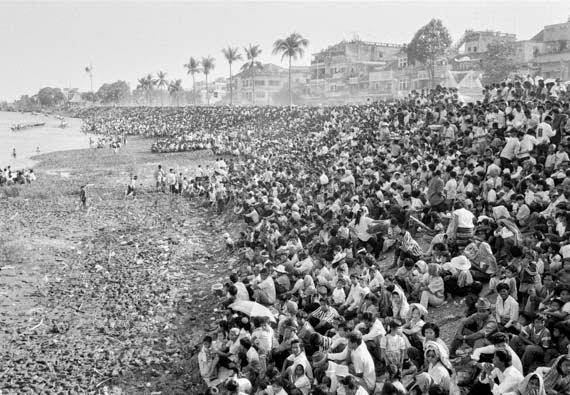 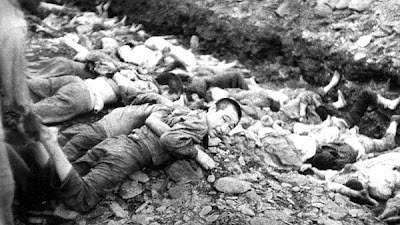 On December 25, 1978, Vietnam launched a full-scale invasion on Cambodia, seeking to end Khmer Rouge's border attacks.On January 7, 1979, Phnom Penh fell and Pol pot was deposed and fled into the jungle. He was pleased under house arrest in 1997 by a splinter Khmer Rouge group and died in his sleep on April 15, 1998, due to heart failure, even though many suggest that he was poisoned by his wife. He was never condemned for crimes against humanity. 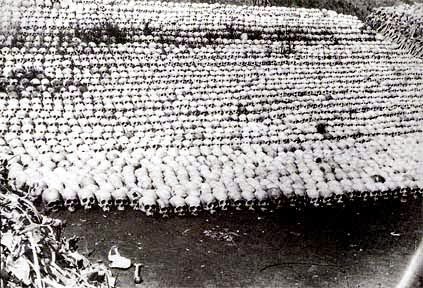 Democratic Kampuchea was one one of the worst human tragedies of the 20th century along with the World War II. Over 2.000.000 people died from diseases due to lack of medicines and medical services, starvation, execution, or exhaustion from overwork. Tens of thousands were made widows and orphans, and those who lived through the regime were traumatized by their experiences. Several hundred thousand Cambodians fled their country and became refugees. Millions of mines were laid by the Khmer Rouge and government forces, which led to thousands of deaths and disabilities since the 1980's. A large proportion of the Cambodian people have mental problems because their family members were lost and their spirits damaged, These factors are one of the major causes of the poverty that plagues Cambodia today.

This concludes the first "Top Ten Week" folks, and i know it wasn't really a week, but i also gotta work for a living. Also, research turned out to be far more interesting than i tough, making me deviate from my original search very often. I hope you found these post as interesting as they for me me writing them, and i know that the subject  i chose may be disturbing, but it is my belief, that we have an obligation to be aware of our history as a species. The least we can do about all these countless people that lost their lives in the hands of madmen, is to know their story.
Also, i know many of you are wondering, why i left out historic figures like, Genghis Khan, or Nero, or Himmler, or many others who could make it into this list. If you look at these post closely, you ll understand why. You too will notice the similarities and common traits these people share, in contrary to Attila the Hun or Saddam Hussein.
So, join me next week when ill be returning with my scheduled posts, and as always, thank you for reading. 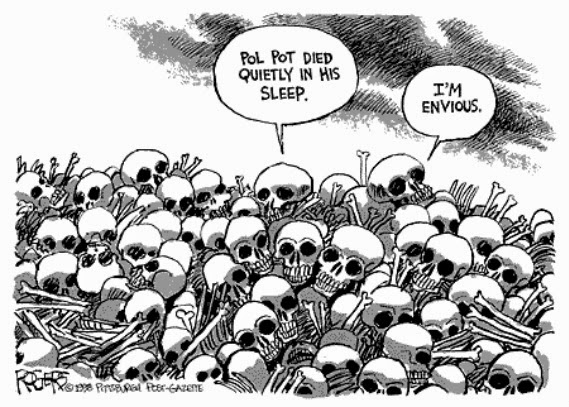 There Is Greatness In You: Cannabis I…
5 Tips for Setting Up Your Family’s B…
What is a Storm Surge? Video, photos…
Tottenham Hotspur agree £25 million d…
Top 3 Athena’s Statue Magnificent Sid…