It's been a smooth sailing few weeks here. It's so hard to think that August is here already! I can't believe that we have been going at this thing for almost a year! Seems like it was just yesterday. But we are slowly Starting to see more improvement.

I was nervous about switching therapi…
Q&A with Phil Yates: Shaping the Futu…
Exhibit D: Lipstick and rifles--Ukra…
How long does it take CBD to work? Ho…
Window Shopping in Historic Downtown …
Physically therapy has been fairly well these past few weeks. They have started to put him in a motorized Wheelchair. We want to see if there might be a chance that he could get his own sometime. He has to pass a series of tests in order to be eligible for one. Somedays he does fine with it and others he won't even want to try! But we will keep practicing with it a couple days of the week. Other than that, they still stand him up and have him do basic things. They also still sit him on the edge of a bench and he is starting to learn balance and can hold himself up for a few seconds.
His occupational therapist has been really Focused on his left side. He has been hooking up an electrical stem unit to his left arm to try and hopefully bring it back to life! It has kind of fallen out of place at the shoulder socket and that could cause some long term effects such as pain and stiffness. But since he has been stemming his arm, he is getting the results he's looking for!
Speech is still about the same. She's focused on getting him to Swallow now more than ever. As soon as he can show that he can swallow on command and consistently, the tracheostomy will come out. And that will be a huge step in his recovery process.
It's so funny because whenever he does anything new such as driving the wheelchair, all the nurses line up in the hall to cheer him on! It's so cool to see what kind of an impact he has had on these people! One of them even call him their "work boyfriend".
Anyways, we knew it was gonna be a long road, but I don't think that we wanted to accept it! 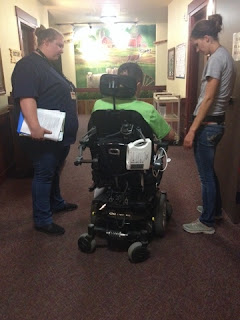