All You Need To Know - "One Rank One Pension"

The Concept of One Rank One Pension (OROP):
One Rank One Pension basically means equal pension for Army veterans and retired Army Personnel of the same rank. Army includes all the three Army, Navy and the Air Force. That is, soldiers with the same rank should get equal pension regardless of their age of retirement. An army personnel retiring in 1980 and an army personnel retiring in 2016 with same number of years of service and same rank should get equal pension. 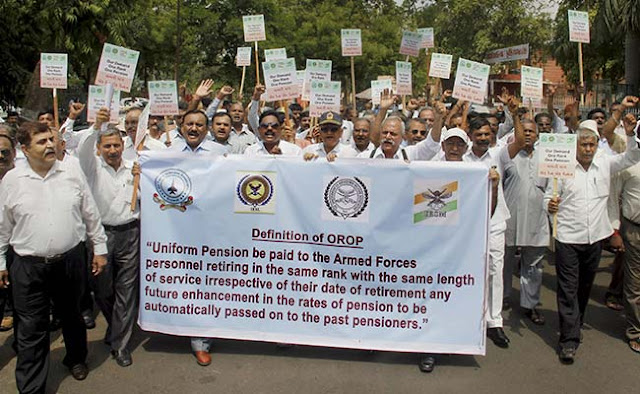 A Glimpse of where it all started:
OROP was applicable till the early 70s. Then the Indira Gandhi led government brought about some changes in the 3rd Central Pay Commission and there it all started. Colonel Inderjeet Singh started protesting against the changes and demanded for OROP with several other changes. He is still protesting with several attempts of fast-till-death. His protest made the defence ministers to rethink about reconsideration of OROP quiet a few times but even after repeated protests and efforts, it is still not implemented. 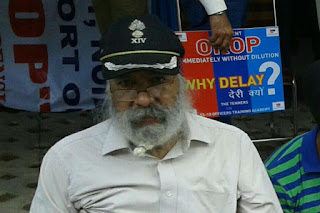 The Protesters:
People demanding One Rank One Pension are mostly retired army personnel and army veterans as they are the most affected. Justice will be served to them when the idea  OROP is applied.
Why are they demanding OROP?
The retiring age in Indian army is set for all type of army personnel according to their ranks.
The primary reason for retiring age being set at 42 years is that the army needs young soldiers with enough physical strength. Also, 85% of the soldiers have a compulsory retirement age of 35-37 years. The reason for the demand arises here. Army personnel retire at the age of 42 years at the maximum. Finding an alternative source of income is very difficult with no experience and if the pension is minimum, the question of survival arises.
Advantages of application of OROP:
OROP will benefit the 25,00,000 retired army service personnel and army veterans and widows and families of martyred soldiers who have served the country in a less ordinary job. All those retired before 2006, the date when the 6th Central Pay Commission was seated, will be benefited from OROP as they will get higher pensions as compared to what they used to get before.
Moral duty. Army personnel sacrifice their life for the safety of the nation. they serve day and night irrespective of the environment. They do so much for the country, cant we give back something in return that will encourage people to join the army and satisfy the retired army personnel that the nation cares for them.
Hurdles on the Implementation of OROP:
Demands to implement OROP in the Central Pay Commission dates back to 1980s and the demands are still not met. Bureaucrats take the negative side or the budget is on the opposition. Like everyone of us, even the nation has a budget problem. If the OROP is implemented, it will cost around Rs. 8500 crores every year in the form of pensions. And this amount will only increase as time goes by because even after the retired personnel are deceased, their families have the right to receive the pension amount. Once any revision is done to the current pension pattern, the same has to be reverted to the pattern of all the retired army personnel and veterans and pension holders. Thus, it is a increasing cost and it becomes a financial burden for the government.
An argument stated by the congress government led by Dr. Manmohan Singh for not bringing the OROP into action is that the records of the army personnel are destroyed after 25 years. Though this argument is false and the documents are never destroyed, it is still a huge task for the government. Maintenance of documents dating back to 1940s and 1950s is a tough task. It is practically very difficult and creates a lot of chaos in the system.
Also, there are legal issues on implementation of OROP.
Protests: 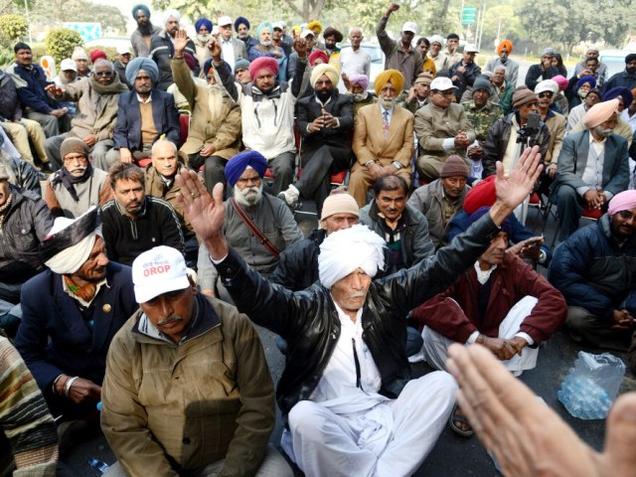 Ex-servicemen protesting outside the house of Arun Jaitley, the finance minister.
Retired army personnel have been protesting for the implementation of OROP for more than 2 years now. Many have staged indefinite dharna at the Jantar-Mantar in Delhi and have also organised protest march to the parliament.
Many of the army personnel have also returned their medals and honours received during their service as a method of protest. The most latest case of protest came yesterday when a army personnel on protest committed suicide due to long delay of OROP implementation.

The Central Pay Commission:
It is set up by the Government of India for recommendations on change of salary structure of the Indian Armed Forces. They are provided 18 months of time from the date of constitution to provide the report on the details of recommendations.
The First Central Pay Commission was established in January 1946 and it submitted its reports in May 1947 and was chaired by Srinivasa Varadachariar.
The second Pay Commission was established in August 1957 and it submitted the report after 2 years.
The CPC3 was a important one. It was established in April 1970 and submitted its report in March 1973, after 3 long years. It brought about major changes, one of them being removal of OROP.
The CPC4 was established in June 1983 and reports were given in three phases in four years.
The CPC5 was constituted in April 9, 1994. It increased the financial burden of the government. after the implementation, the government had to pay roughly 45000 crores as wage, a 99% increase from the previous plan.
The government agreed to constitute the CPC6 in July 2006. It brought additional burden of 20000 crores added to the previous. The army personnel swore to go on strikes if there was no hike in the salary.
The process of CPC7 has already started. Fat increase in wages and salaries is expected. Composition of the CPC7 includes, Justice Ashok Kumar Mathur, retired judge of Supreme court, acting as the chairman. Other members include, Vivek ray and Dr. Rathin Roy acting as full-time members and Meena Agarwal as the secretary.
The Narendra Modi led BJP government has promised the implementation of OROP in the CPC7 and has said that almost all the hindrances including the financial hindrance has been cleared and it will be applied as soon as possible.

All You Need To Know - "One Rank One Pension"