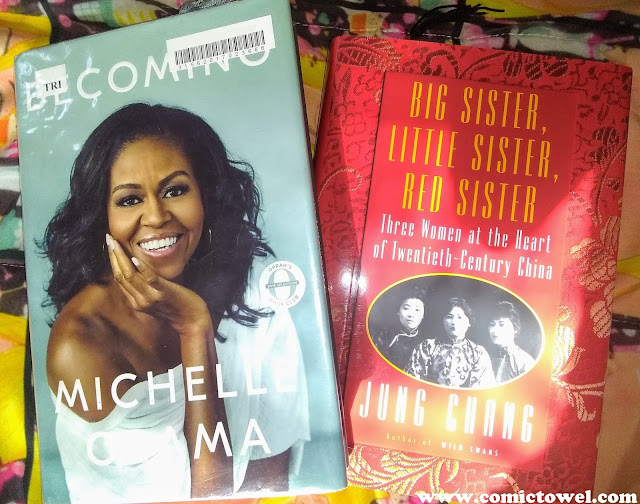 So what’s next on the #NonFictionNovember reading TBR? The image is obvious, but to walk it on down through there it goes like this…
Becoming by Michelle Obama

"In her memoir, a work of deep reflection and mesmerizing storytelling, Michelle Obama invites readers into her world, chronicling the experiences that have shaped her—from her childhood on the South Side of Chicago to her years as an executive balancing the demands of motherhood and work, to her time spent at the world’s most famous address. With unerring honesty and lively wit, she describes her triumphs and her disappointments, both public and private, telling her full story as she has lived it—in her own words and on her own terms. Warm, wise, and revelatory, Becoming is the deeply personal reckoning of a woman of soul and substance who has steadily defied expectations—and whose story inspires us to do the same."

Yes, yes, yes. I’m a year late to this party. But, as I always say, when a book comes it comes at the right moment in which it needs to be one's hand (or, heck, e-reader). Which, as a given, is now about Michelle Obama's Becoming for me. I wanted to use this #NonFictionNovember to lean into inspirational memoirs/autobiographical stories. You know, to get my own inner seas a glimpse of direction. Besides, life is a recipe that takes the right amount of timing of ingredients to bring it taste. BOOOOMMMMM! Put that expression on a T-shirt, buddy. It sounds like an opening tagline for a Real Housewives of Atlanta cast member. I’m picturing Cynthia Bailey. (But did y'all see what I just did there?)

Moffat Camping and Caravanning Club S…
Manton Rempville -6
ఒత్తిడి మరియు డిప్రెషన్ తగ్గించుకోవడా…
Nikki Banks – Roman Sister
Wuhan Weather Report
But I digress. Y’all get the gist. I'm taking on the story of one of my most classiest of classiest women ever to exist. And that twinkle of thought is only the beginning. Basically, I'm looking for more confirmation to commit to this...

"Big Sister, Little Sister, Red Sister is a gripping story of love, war, intrigue, bravery, glamour and betrayal, which takes us on a sweeping journey from Canton to Hawaii to New York, from exiles' quarters in Japan and Berlin to secret meeting rooms in Moscow, and from the compounds of the Communist elite in Beijing to the corridors of power in democratic Taiwan. In a group biography that is by turns intimate and epic, Jung Chang reveals the lives of three extraordinary women who helped shape twentieth-century China."

Author Jung Chang tackles China’s history in the most storytelling of fashions. And finally we have a new release (you better believe it was on my pre-orders list) from her. Chang hasn’t released a book since 2013’s Empress Dowager Cixi (CLICK HERE TO SEE MY THOUGHTS ON THAT BOOK). Now she’s back with Big Sister, Little Sister, Red Sister: Three Women at the Heart of Twentieth-Century China. As I said, Chang knows how to relay China's history and make it both real, fascinating and enjoyable to digest. With this book I’m particularly interested in getting into Madame Chiang Kai-shek’s story. Years ago I attempted to read a biography of her story, but also that of her surrounding sisters. Let’s just say that biography didn’t have the spell-binding gusto and finesse as a Jung Chang book. HA! Now’s my chance to go further into this fascinating woman in history. And just China's history as a whole. Considering I have a deep fascination with The Cultural Revolution–among other eras of extremeness within China's history.

Anyway, I’m off to read. How about yourself, eh?