A Nice and Easy to dye her Hair black, Gemma Williams was contracted septicaemia after using it and now warning others to do a patch test or risk suffering the same fate. 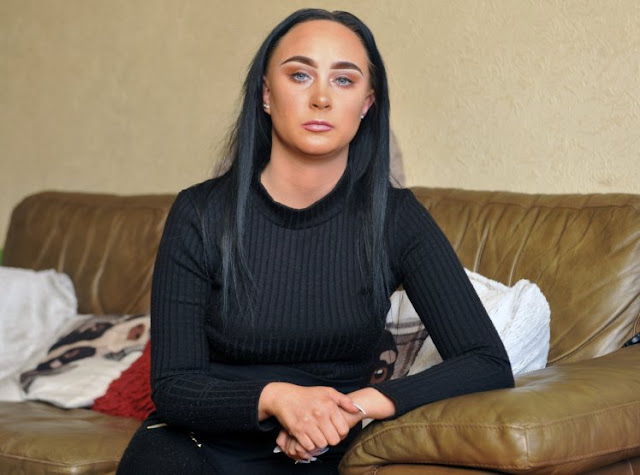 Her Allergic Reaction glued her eyes shut and burnt her skin, and left red and puffy sores behind her ears. She was given steroids and antibiotics to treat the inflammation but was back in hospital a week later where she was told she came close to death. The make-up and beauty artist, who used to change her hair colour regularly, has vowed never to touch Hair Dye again.

Benefits of onion juice for hair - Si…
Shen Men Piercing: Does it work for A…
Karen S. Wiesner, Tension and Twists,…
Why a CryptoPunks Owner Turned Down $…

She was told by doctors that she came close to death (Picture: SWNS)

Gemma, 24, contracted septicaemia after using jet black Nice and Easy hair dye (Picture; SWNS)
‘I just can’t believe it – it’s mad. I’m never touching hair dye again,’ she said.
‘I have used the same dark hair dye before and had no problem.
‘I had blonde hair for years and wanted to have it darker, so I bought the black one, put it on and it’s obviously reacted.
‘I had swelling in my ears and puss coming out of the burns on my skin – and even my eyes were stuck together.
‘I had a rash all over my face and it awful – it knocked by confidence, I couldn’t sleep.’

Gemma suffered severe burns to her skin after having an allergic reaction (Picture: SWNS)

The dye had seeped into her blood following her bad reaction (Picture: SWNS)
Gemma suffered the severe reaction within an hour of treating her hair but said the creams and tablets she was given to treat it didn’t help.
She was eventually hospitalised at Manchester Royal Infirmary for two weeks
‘Everyone just puts hair dye on their head without actually reading the instructions – but it’s scary,’ she said.
‘It’s scary because when you put hair dye on, you don’t realise that it’s going to go into your body and like me, almost kill you.
‘You just don’t know – it is very serious. From the burns it leaked and got into my blood stream causing septicaemia.’
Warning others of the perils, she added: ‘I say always do a patch test – it could save your life. I died my hair all the time and I would advise people to think twice.’

This post first appeared on Grabey | Weird News, Funny News, Strange News, Anything, please read the originial post: here
People also like
Benefits of onion juice for hair - Side effects of onion juice on hair
Shen Men Piercing: Does it work for Anxiety and Depression?
Karen S. Wiesner, Tension and Twists, Part 3 (Writer's Craft Article)
Why a CryptoPunks Owner Turned Down $9.5M in Ethereum for His NFT