Frog that glows in the dark has been discovered

But dim the light and switch on the UV torch, and this Bizarre Creature glows bright fluorescent green. 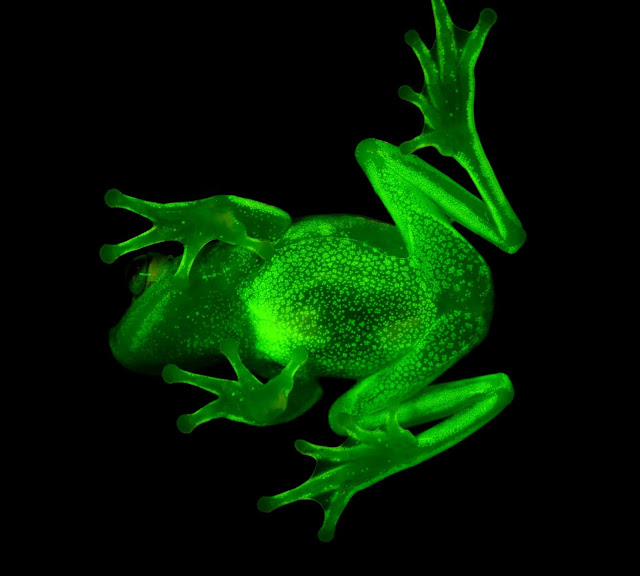 The South American polka dot tree Frog (Hypsiboas punctatus) is the first ever fluorescent amphibian found on Earth.
In normal light the frog is a dull greenish brown with small red spots.
But this bizarre creature, found in Argentina, has fluorescent skin pigments that absorb light at short wavelengths and re-emit it at longer wavelengths – creating a natural glow.

Moffat Camping and Caravanning Club S…
Why B.B.’s is the King of BBQ in Kans…
Dog owner’s you have one more reason …
Amazon Scams And Dirty Tactics For CB…
OPINION - Shields and Brooks 9/6/2019

The Hypsiboas punctatus was found in the Amazon (Picture: Giphy)
It fluoresces a chemical using both lymph and glandular secretions.
But the chemical has never been found in vertebrates before.
Fluorescence is known in some fish, scorpions and birds, but never in the 7,000 plus species of amphibians out there.
Scientists, from the Bernardino Rivadavia Natural Sciences Museum in Buenos Aires, found the frogs boost their brightness by up to 30%.

The frog is the only amphibian known to man that is fluorescent (Picture: Getty Images)
‘This is very different from fluorophores found in other vertebrates, which are usually proteins or polyenic chains,’ Dr Maria Gabriella Lagoria, a photochemist at the University of Buenos Aires, told Chemistry World.
Writer: Simon Robb for Metro.co.uk

Frog that glows in the dark has been discovered