In some ways, this Valentine's Day was much like any other - my Husband and I have tended to avoid going out to restaurants on Valentine's Day (in fact, I'm not sure we ever have) - partly in expectation that venues will be turning tables as quickly as possible, partly because prices seem to go up that day, and partly- actually, mainly - because most restaurants offer set menus on February 14 and there's hardly ever anything my husband likes.

Why eco-friendly custom paper cups ar…
51 Best Start-up Ideas to Try
Bogobiri House Ikoyi Lagos: Fun thing…
When You and Your Best Friend Had an …
Top 10 Best Sites Like GoStream To Wa…

Dining out with a fussy eater is tricky and dining in during lockdown isn't much easier! I wasn't planning to bother looking for a nice takeaway option for Valentine's Day, but saw an advert for a local Italian restaurant that sounded nice and decided to have a look.

The Spaghetti Tree in Sutton is not to be confused with the Spaghetti House chain - it's a family-run Italian restaurant that has been going for more than 30 years. According to their website they were offering live entertainment before the pandemic, and have now turned to takeaway and delivery - including a Sunday roast which I'm going to have to try. 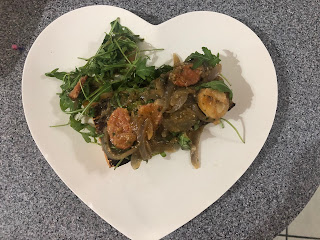 The Valentine's Day offer was indeed a set menu, but with quite a few options compared to the three or four you usually find - this one had six starters and six main courses to choose from, one of which was any pizza from their menu. That suited us perfectly!

It wasn't cheap at £40 each but that price included three courses, delivery, a cocktail and chocolate covered strawberries. As my husband is teetotal I got to have his cocktail and I can say that even though I'm not really sure of the ingredients (strawberry, peach and vodka came through) they really were delicious. 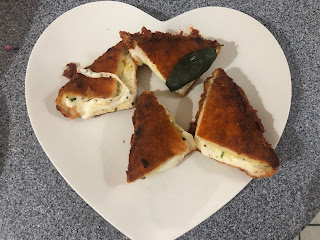 I chose the tiger prawns with chorizo bruschetta for my starter, which came with rocket and red onions as well as a balsamic glaze. The bread was a little soggy by the time our food arrived but that did no harm and it was very tasty. My husband had deep fried mozzarella parcels - the portion contained four, which is something we probably would have shared between us had we been eating in the restaurant, and he said that while they were very nice, two was plenty as they were actually quite heavy. 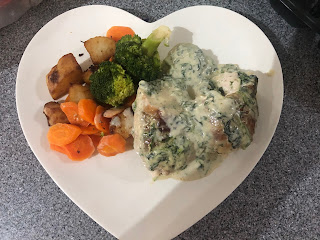 I was very tempted by several of the main courses in the set menu, including the prawn and crab linguine, the tagliatelle with meatballs and the seabass with tiger prawns but I plumped instead for 'pollo Casanova' - chicken breast wrapped in pancetta in a spinach and gorgonzola sauce served with saute potatoes and seasonable vegetables. It was excellent - the chicken (two sizeable pieces) perfectly cooked, the sauce not overpowering and complementing the dish well, and the potatoes and vegetables were exactly how I like them. Again, the portion was so large I couldn't eat it all! 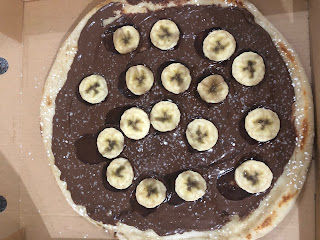 My husband enjoyed his margerita pizza and said the brownie he had for dessert was very good. For my dessert I chose the nutella pizza, which the menu described as topped with strawberries and white chocolate swirls - instead, it came topped with sliced banana! (And I don't like banana, but then again I don't like strawberries either). It was far too large for one person and again if we were in the restaurant would have been a sharing dessert - as it was, I ate one small slice and the rest ended up being wasted!

I was very pleased overall with the menu, from the wide choice to the quality of the food (and the drinks!), and would definitely order from here again.