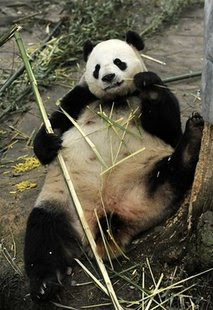 Two giant Pandas from China were welcomed to Australia on Saturday with gifts of bamboo and a city party before settling into their new home, a 25-acre (10-hectare) natural enclosure at the Adelaide Zoo.

Crypto mining can benefit Texas energ…
Top Things to Do in San Francisco, Ca…
Man United fan pleads Sir Ferguson to…
Helbiz reports revenue increase but d…
Dj Fresh SA – Another Fresh Mix (Epis…
Four-year-old male Wang Wang and 3-year-old female Fu Ni are on loan to the zoo for 10 years as part of a joint research program, and their arrival comes amid slightly strained relations between China and Australia.
"It's a dream come true," said zoo CEO Chris West. "It's a journey ended and a journey started."
Twelve life-size panda figures lined the runway at the Adelaide airport, where the animals' flight was met by state Premier Mike Rann and other state and zoo officials holding a "Welcome" sign and branches of bamboo.
An 18-vehicle convoy of floats then left the airport for downtown Adelaide, where a parade through the streets was followed by a public party lasting all afternoon.
The pandas were given a police escort to the zoo, which built an 8 million Australian dollar ($7.25 million) enclosure that includes bamboo plants and refrigerated rocks to keep them comfortable in Adelaide's hot summers. Two Chinese handlers traveled with the pandas and will stay in Adelaide for a few months to help with their adjustment.
"They're in the quarantine area and they're very happy and relaxed," zoo spokeswoman Emily Rice said as they animals settled in to their new quarters, stretching their legs and munching on fruit.
The pandas will be in quarantine at the zoo for 30 days, but will be visible to the public behind glass when their exhibit opens Dec. 14.
West said the pandas are expected to generate more than AU$600 million for the South Australia state economy during their time here, with an anticipated 262,000 overseas visitors and 1.3 million Australians visiting Adelaide to see the animals.
China often sends gifts of its unofficial national mascot to foreign nations as a sign of friendship. Chinese President Hu Jintao offered the pandas as a goodwill gesture during a 2007 visit to Australia.
However, relations have recently become strained between the countries, with Beijing upset over alleged Australian government restrictions on Chinese investment in mining, and the arrest of an Australian mining executive in China.
The two pandas had been living at the Bifengxia Giant Panda Breeding Center in Ya'an City in southwestern Sichuan province, after the Wolong Giant Panda Research Center where they were living was destroyed in a massive earthquake last year.
Only about 1,600 of the animals live in the wild, while another 120 are in Chinese breeding facilities and zoos.
China uses payments from zoos that host loaned pandas to fund research and breeding programs. Under such loan agreements, any panda cubs born overseas to lent animals remain China's property.