This hooked bill Family is separated from parakeets and parrots to include only Cockatoo. There are 7 subfamilies, but we will focus only on those found in captivity: Calyptorhynchus, Cacatuines, Cacatuas, and Nymphicines. Today we’re going to take a look at this big family to see what exactly it is.

Choose The Guy You Want To Marry, The…
What would happen to a modern-day Mos…
9 Best Pubic Hair Trimmers for Safe &…
Oasis Space – Upright Walker with Sof…
Dash Cam Footage Shows Moments Before… For information, the 6 genres are:

However, despite the number of genders, there is a certain common trait between the sub-families. Generally, these birds are gregarious, they have an erectile crest that is used in the body language of these birds. Their sizes, colors, and shapes vary between species. Often noisy, these feather balls are extremely destructive. It is therefore essential to provide them with what it takes to meet this natural need that allows the passage of beaks and claws. Boredom is their worst enemy, unfortunately, it’s the boredom they easily fall victim to, so it’s essential to give them something to deal with. Unfortunately, this often results in stitching. Among the 5 species found in this family in captivity are the Microglossa Noir ° cockatoo, that of Banks °.

They are frugivorous and granivorous and have dark plumage from Australia. All of them have an identifiable sexual dimorphism. Their beaks are extremely powerful.

These hooked beaks vary from plus or minus 30cm to plus or minus 65cm. These birds generally have a strong character and are not to be put in all hands. They enjoy a long life in captivity. The record held by an animal park is 92 years, however in private individuals on average they live 40 to 50 years.

Valérie JaranSensitive to cold outdoors, these feather balls can hardly withstand temperatures below 5 ° C and high humidity. A very slight sexual dimorphism would be visible to the naked eye, but personally I find it so vague that nothing beats a DNA test.

Among those found in captivity are the Rosalbin * Cockatoo & the Gang-gang ° Cockatoo.

Measuring more or less 35cm, these birds have gray plumage. These hooks enjoy digging on the ground so it is advisable to deworm them. This therefore means that excavation and foraging games are necessary for them. If their character is asserted, they remain easier than the previous families mentioned. They don’t like too low temperatures like their cousins. Their life expectancy in our homes is 35 to 40 years.

Josiane Mathinier0 In captivity, these feather balls are subject to being overweight, so it is essential to monitor their diet and avoid overly fatty foods. Its daily menu should consist of 50% fresh products (fruits & vegetables), dry, soggy, sprouted, extruded seeds.

cockatoo (Cacatuidae) form a family of the order of psittaciformes including all species of cockatoo, and cockatiel.
They are recognized by their feathered crests that individuals of this family can raise at will on their heads. Lifespan: 20 – 40 years (In the wild)
Scientific name: Cacatua galerita
Mass: 1.7 lbs Encyclopedia of Life
Length: 20 in. Encyclopedia of Life
Conservation status: Least Concern (Population decreasing) Encyclopedia of Life
Class: Aves
The Yellow-crested Cockatoo (Cacatua galerita) is a species of bird in the family Cacatuidae. It is one of the largest and most widespread Australian cockatoo. It is frequently sought after as a pet in and out of Australia. But, in freedom, it is often slaughtered and poisoned because considered as harmful. Indeed, in bands or solitary, it can attack the grain and fruit crops, as well as the wood of trees, garden sheds or houses. However, to destroy them, an authorization from the Australian government because they are protected animals. 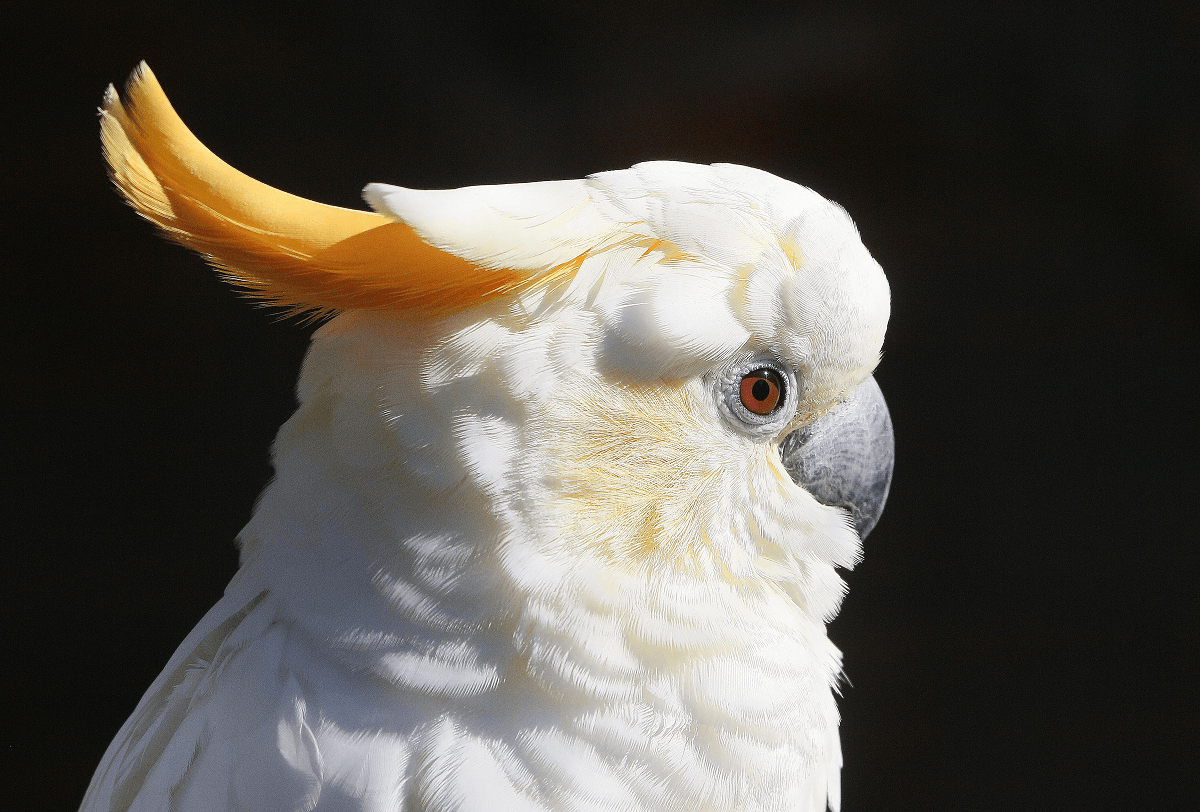 This bird is more common in the driest parts of the continent. Five subspecies significantly different by the size of the beak are distinguished. Although the northern subspecies are still widespread, the two southern subspecies are threatened. The latter are named after their English vernacular names, the “Banksian forest cockatoo” and the “Southeast banked cockatoo”.

The Banksian Cockatoo is about 60 centimeters long. The two sexes are dissimilar. The males are completely black, with the exception of red bands on the tail, while the females, slightly smaller than the males, have black brown plumage speckled with spots and thin yellow bands while the bands of the tail are yellow. orange.

These birds usually live in eucalyptus forests or along rivers. In the north of the country, these cockatoos generally gather in large bands. They feed on seeds and nest in tree cavities. This is why they depend on the presence of fairly large diameter trees, usually eucalyptus trees. Populations in south-eastern Australia are threatened by reduced forest cover and other habitat modifications.

Of all the “blackish plucked cockatoos”, the Banksian Cockatoo is the easiest to breed1, but it remains rare and expensive (like all the species in this group) outside Australia2. Mass: 14 oz (Adult) Encyclopedia of Life
Scientific name: Cacatua ducorpsii
Conservation status: Least Concern (Population stable) Encyclopedia of Life
Phylum: Chordata
Higher classification: Cacatua
Order: Parrot
Calyptorhynchus funereus
Funeral cockatoo
Although not particularly common, they are one of the most beloved and characteristic birds of South Australia. They are generally seen flying at a moderate height. They have particularly large wings and fly very slowly and with singularly heavy and fluid movements. Their loud and sinister howling allows them to make calls over long distances and the combination of their cries and their silhouette is unique. Mass: 1.5 lbs Encyclopedia of Life
Scientific name: Calyptorhynchus funereus
Phylum: Chordata
Higher classification: Calyptorhynchus
Order: Parrot
Rank: Species
The Funeral Cockatoo (Calyptorhynchus funereus) is a species of bird belonging to the family Cacatuidae. It is native to south-eastern Australia. It is the largest of the cockatoos and Australian parrots. It is found from the Eyre Peninsula in the south to the central east of central Queensland. In at least some places, it seems to have adapted to the presence of humans and can often be seen in many parts of Sydney and Melbourne. Scientific name: Cacatua haematuropygia
Mass: 10 oz (Adult) Encyclopedia of Life
Conservation status: Critically Endangered (Population decreasing) Encyclopedia of Life
Rank: Species
Phylum: Chordata
Higher classification: Cacatua
The Philippine Cockatoo (Cacatua haematuropygia) is a monotypic species of bird in the family Cacatuidae, endemic to the Philippines. While it was common in 1950, it experienced a rapid decline to the point of only having 1,000 to 4,000 representatives, divided into several populations. This post first appeared on African Parrot Grey, please read the originial post: here
People also like
Choose The Guy You Want To Marry, Then Submit To Him
What would happen to a modern-day Moses in America?
9 Best Pubic Hair Trimmers for Safe & Painless Grooming
Oasis Space – Upright Walker with Soft and Wide Cushioned Seat
Dash Cam Footage Shows Moments Before Uber Driver & Mother Of Four Is Murdered In Pennsylvania