The residents of Tolichowki arwa in Hyderabad have been facing difficulties due to heavy vehicles entering into small lanes of the colony and parking it at the unauthorised place. The inner lanes of this area are being used as main roads by a large number of buses, trucks and other public transport vehicles.

Universal Tips on How to Promote Your…
Six Easy Treats to Make in the Kitche…
Music Profile: Elliott Waits For No O…
Self Motivation: How to Keep Moving F…
It’s Me – Chapter 11

Always, commuters find it difficult to use the stretch of Tolichowki circle, under the flyover which is the only route for traffic coming from residential areas, including Golconda, Seven Tombs Road, MD Lines and Hakeempet, to reach Rethibowli and Mehdipatnam or towards Gachibowli on other end. There are two bus-stops under the Tolichowki flyover In Hyderabad.

Passenger buses passes through this stretch, but most often buses get stuck en route, as the road has been occupied by hawkers. Though under the flyover a separate section for shops has been allotted for street vendors, but till now, none has been able to set up business at the structures constructed by the Greater Hyderabad Municipal Corporation (GHMC).

Reshma Begum, who daily travels from Gulshan Colony, Seven Tombs Road to Mallepally, said, “I had to take an auto from Seven Tombs Road to reach the bus-stand under the Tolichowki flyover is so uncomfortable and difficult to wait for bus, as commuters cannot even stand at bus-stop and because the entire stretch is taken over by street vendors. During peak hours the road witnesses heavy traffic congestion.”

Not just commuters, even pedestrians find it problematic as vendors have encroached upon footpaths. On the other hand, the sub-road, a major part of the road, is encroached by hotels as a large number of vehicles are parked there. “Also, when there is no auto stand, under the flyover, a large number of autos park on the road, waiting for customers causing difficulty to pedestrians and commuters,” said Prashanth Reddy, who works in the temple under the flyover.

A traffic policeman has been deployed to manage the traffic jam, but still, the problem remains”. “Until unless the GHMC, along with the Police department, removes these public property encroachers, and takes strict action against hotels, which are allowing their customers to park vehicles in the illegal Parking area, this issue cannot be resolved,” said Syed Zubair, resident of Hakimpet.

Recently, in an order to provide easy and safe traffic to the common man, the Town Planning department of GHMC had removed all encroachments of shop-owners, as they had occupied the road for parking or for keeping their products. But, again, they have reconstructed a platform on the public road, so that they again utilise the space in front of their shops as parking. 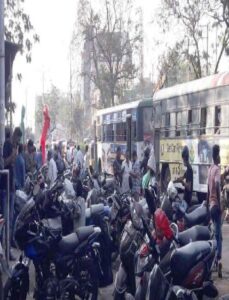 On the other hand, people in Hyderabad can now file a Complaint against commercial establishments that are collecting illegal parking fees. As per a 2018 order by the Municipal Administration and Urban Development, free parking for up to 30 minutes is allowed at commercial establishments that collect parking fees. However, in view of complaints of non-compliance, the Greater Hyderabad Municipal Corporation (GHMC) has now come up with a format to help the public file a formal complaint against establishments violating parking rules of the city.

Establishments found violating the free parking rules of Hyderabad can face a fine of up to Rs 50,000 for each instance of violation. The complaints will be addressed to the Director of Enforcement, Vigilance and Disaster Management of the GHMC. However, the complaints have to be sent via post. Appeals are also being made to the Municipal Corporation to allow the complaints to be filed through emails or through the official GHMC app.

The complaints will be accepted via post or through the Twitter account of the Central Enforcement Cell, of the GHMC. While filing a complaint, the complainant must include the original parking fee receipt and shopping bill, along with their complaint letter.

The GHMC has also issued a format for parking tickets, which all commercial establishments should strictly follow. The name of the agency, with the address and mobile number, should be printed on the tickets. Parking tickets should be handed over to the customer even if the parking fee amount is not applicable. If the fee is collected, a “Paid” stamp has to be marked and if not chargeable, the ticket should be stamped with “Exempted” before being handed over to the customer with the signature of the person in charge.

All commercial establishments collecting parking fees in the city have been given 15 days to comply with the notice. The directorate of EV and DM will begin inspections thereafter and has warned of levying a penalty of Rs 50,000 per instance of violation, imposed under section 24 and 28 of the Telangana Apartments Act and Rules, 1987.

In pursuance to the instructions for the enforcement of Parking Policy, process is herewith being placed in public notice along with proforma complaint. The penalization is now live & citizens may follow the process for issuance of penalty by @CEC_EVDM @KTRTRS @arvindkumar_ias pic.twitter.com/Y18ArB8V4z

As per the 2018 Government Order by the Municipal Administration and Urban Development, for parking over 30 minutes and for up to 1 hour, the parking is free if the person produces the receipt of purchase, irrespective of the amount, as proof of having done shopping in the respective mall/ multiplex. In the case of not having a purchase bill, a prescribed parking fee for the said duration may be collected.

Parking for more than one hour is free if the person who has parked the vehicle produces a bill/movie ticket to an amount that is more than the parking fee for the said duration. #KhabarLive #hydnews

This post first appeared on #KhabarLive Hyderabad, please read the originial post: here
People also like
Universal Tips on How to Promote Your Business On Facebook
Six Easy Treats to Make in the Kitchen
Music Profile: Elliott Waits For No One - Alternative Rock Band - Illinois, Usa | SRL Networks London Music PR
Self Motivation: How to Keep Moving Forward In Your Career or Business
It’s Me – Chapter 11