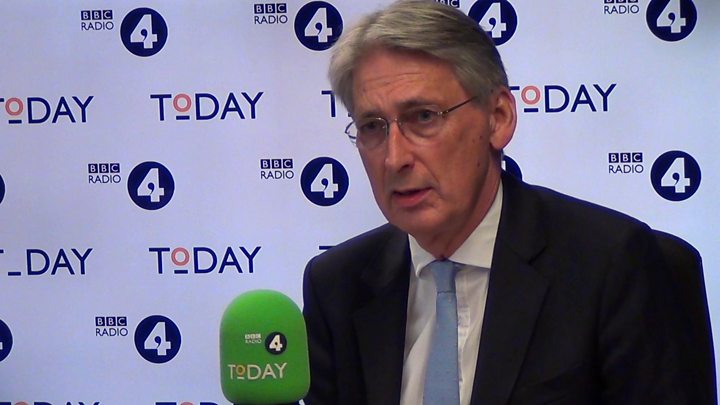 The PM faces a showdown in Parliament later as MPs aim to take control of the agenda to stop a no-deal Brexit.

Ex-chancellor and Tory rebel Philip Hammond said he thought there was enough support for the bill, seeking to delay the UK’s exit date, to pass.

No 10 officials warned the prime minister would push for an Election on 14 October if the government lost.

Boris Johnson said he did not want an election, but progress with the EU would be “impossible” if MPs won.

Last-ditch efforts to get the Tory rebels on side have been taking place, but BBC political editor Laura Kuenssberg said the meeting between the prime minister and the group went “less than swimmingly” and was “less than cordial”.

There are thought to be about 15 confirmed rebels – set against the government’s working majority of just one.

The government had hoped the threat of an election – and of deselection and expulsion from the party – would be enough to bring them into line.

To call an election under the Fixed-term Parliaments Act, Mr Johnson would need support from Labour as he requires the backing of two-thirds of the UK’s 650 MPs to trigger a poll.

But BBC assistant political editor Norman Smith said the momentum inside Labour was increasingly against giving Mr Johnson support for a snap election.

“Why? Because they don’t trust him not to change the date of the election to after 31 October, after we have left the EU without a deal,” our correspondent added.

Jeremy Corbyn said the party had sought legal advice about the issue of timing, and added: “I think the important thing is to stop a no-deal exit and let the people of this country decide their own future.”

The PM’s spokesman insisted it was simply wrong to suggest that the date of polling day could or would be changed. They insisted again that Mr Johnson did not want an election but MPs determined to block no deal were forcing him into that position.

Opponents of no deal believe it would harm the economy, cause severe disruption to travel and supplies of goods like food and medicine, and lead to a hard border on the island of Ireland.

Proponents insist, though, that any disruption would be short-lived and could be managed with careful preparation.

Mr Johnson has vowed to leave on 31 October with or without a deal.

A number of MPs against no deal have come together across party political lines to try to stop a no-deal Brexit and they have submitted a motion for an emergency debate to the office of Commons Speaker John Bercow.

If Mr Bercow approves their application, the debate will be held later after Parliament returns from recess on Tuesday afternoon.

Their proposed bill would force the prime minister to ask for Brexit to be delayed until 31 January, unless MPs had approved a new deal, or voted in favour of a no-deal exit, by 19 October.

Mr Hammond told BBC Radio 4’s Today that despite the “aggressive operation” against them, he believed there were enough Tory MPs behind the bill for it to succeed.

He said it was “rank hypocrisy” of Downing Street to have threatened them with expulsion from the party and deselection given how many current ministers had previously defied Theresa May over Brexit.

The former chancellor was reselected by his local Conservative Party Association on Monday to stand as its candidate in the next election and said Number 10 would have “the fight of a lifetime” on their hands if they tried to override that.

“This is my party. I have been a member of my party for 45 years, I am going to defend my party against incomers, entryists, who are trying to turn it from a broad church into a narrow faction,” he added.

“It’s craftily designed to allow serial extensions, it would immediately require the UK to accept any EU conditions, however punitive, however harsh, and regardless of those conditions the price tag for the taxpayer would be £1bn each month,” he told BBC Radio 4’s Today programme.

“That is clearly designed to delay if not to cancel Brexit, and I think it scuppers the very positive progress we’ve had with the EU to get a deal.”

In a televised announcement on Monday, Mr Johnson insisted he could achieve changes to the current Brexit deal at an EU summit on 17 October, but taking no deal off the table would “plainly chop the legs out from under the UK position” and make an election inevitable.

But shadow Northern Ireland secretary Tony Lloyd said Labour would not “fall for Boris Johnson’s trick” by agreeing to a general election that could ultimately be held after 31 October.

Shadow attorney general Baroness Chakrabarti said they needed “legislative lockdown” against no deal to be in place before agreeing to an election.

SNP Westminster leader Ian Blackford also said he wanted a general election, but opposition parties “need to be able to influence the date of that election”.

“We know exactly what Boris Johnson is up to,” he added.

What does the no-deal bill say?

The legislation to be put forward on Tuesday seeks to tie Boris Johnson’s hands, and instructs him to ask the EU for an extension of the Brexit process until 31 January 2020.

A lot of attention will be on the clause which says that if the European Council proposes an extension to a different date, then the prime minister must accept it within two days, unless that extension has been rejected by the House of Commons.

In other words, the power to decide will lie with members of Parliament not with the government.

For a PM who has promised to leave on 31 October come what may, it would seem to be impossible to accept.

Hence all the talk of an early election. We will know for sure before the end of this week.

Conservative MP Justine Greening, who is also planning to vote in favour of the cross-party legislation, has said she will not stand as a candidate at the next election.

The MP for Putney told Today she wanted to “focus on making a difference on the ground on social mobility” and could do that “better” from outside Parliament.

Ms Greening, whose constituency voted to Remain, accused Mr Johnson of offering voters a “messy” general election that forced them to choose “no deal or Jeremy Corbyn”.

Mr Raab insisted he did not want Tory rebels to feel pushed out of the party, but added: “We do need to focus our minds on the reality of this crucial crossroads week for the country – we want to get out of this Brexit rut we’ve been in for three years.”

Elsewhere, in Edinburgh, a judge is hearing arguments over the prime minister’s plan to shut down the UK Parliament.

And, in another legal challenge against his suspension plan, the High Court has given former Conservative Prime Minister Sir John Major permission to provide a written contribution to the judicial review sought by campaigner Gina Miller.

Mr Johnson wants to suspend business for five weeks ahead of a Queen’s Speech – setting out a new legislative programme – on 14 October.

A cross-party group of parliamentarians wants a ruling at the Court of Session that Mr Johnson is acting illegally.

What do you want to know about Brexit and what happens now?

Use this form to ask your question:

If you are reading this page on the BBC News app, you will need to visit the mobile version of the BBC website to submit your question on this topic.

Landmine clearance almost complete on…
EU’s ‘Borderless’ Approach to Cryptoc…
Can I tell you the truth?
Markets gaping down a bit, USMCA, Gun…
OPINION - Shields and Brooks 9/6/2019