Here is a realtime information on a trending issue within our radar posted to keep you abreast about latest happenings; ;

Turmeric, sometimes called Indian saffron or the golden spice, is a tall plant that grows in Asia and Central America.

How to Get Rid of Mice – 5 Methods
How to Handle Client Complaints: The …
“The Friend Who May Not Seem a Friend…
Short Happiness Quotes From Famous an…
Sex on Your Period – Reasons to Do It

The turmeric on shelves and in spice cabinets is made from the ground roots of the plant. and the unique bright yellow hue of processed turmeric has inspired many cultures to use it as a dye.

Ground turmeric is also a major ingredient in curry powder and inspires many health benefits which is why Indians have one of the most healthy diets in the world.

Capsules, teas, powders, and extracts are some of the turmeric products available commercially.

Curcumin is the active ingredient in turmeric, and it has powerful biological properties. Ayurvedic medicine, a traditional Indian system of treatment, recommends turmeric for a variety of health conditions. These include chronic Pain and inflammation. Western medicine has begun to study turmeric as a pain reliever and healing agent.

There are several studies which have attributed turmeric with reducing inflammation. Particularity with people suffering from arthritis, this anti-inflammatory ability might reduce the aggravation of inflamed joints.

Researchers suggest taking turmeric capsules of 400 to 600 milligrams (mg) up to three times per day for inflammation relief. Consistent use is key to experiencing these anti-inflammatory benefits. 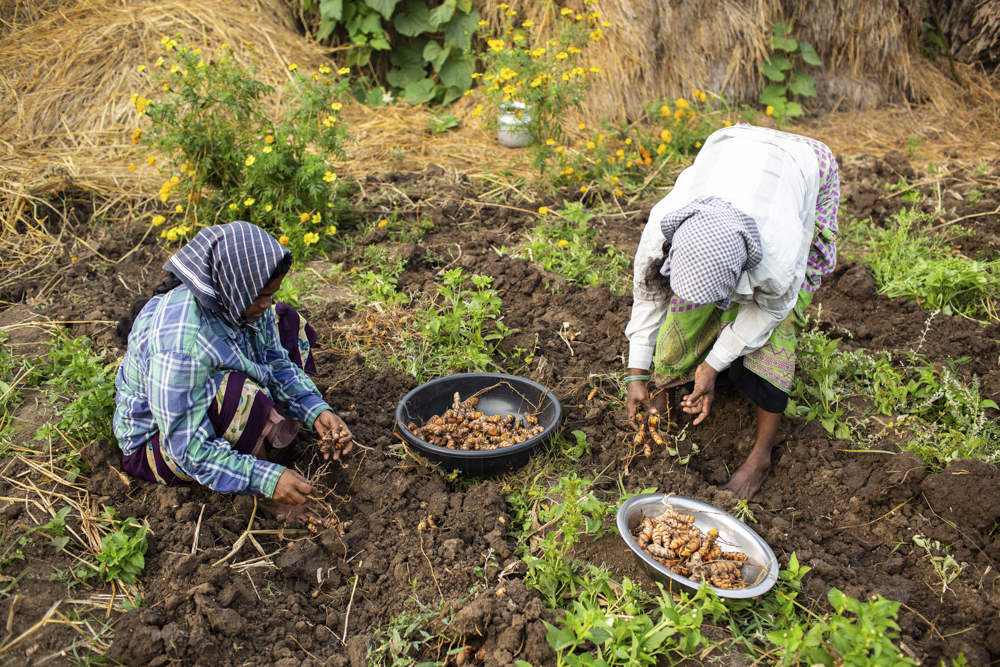 At the 2019 turmeric harvest in Vijayawada, Andhra Pradesh [Credit: The Indian Scene]

Turmeric is also used as a powerful pain reliever if used consistently. The spice is reputed to relieve arthritis pain as well. Studies seem to support turmeric for pain relief, with many noting that the natural effects of turmeric worked just as well as traditional medicinal painkillers such as ibuprofen, particularly in people with arthritis in their knees.

Turmeric is well known in holistic therapy because of it's anti-oxidant abilities. The antioxidant effect of turmeric appears to be so powerful that it is said to be able to stop your liver from being damaged by toxins. This is great news for people who take powerful drugs for issues such as diabetes or other health conditions that might hurt their liver with long-term use.

Turmeric can help digestion. Turmeric whilst adding flavour to food, can also play an important role in digesting that food. The spice can contribute to healthy digestion as a result of its antioxidant and anti-inflammatory properties.

Turmeric is used in Ayurvedic medicine as a digestive healing agent. Western medicine has now started studying how turmeric can help with gut inflammation and gut permeability, two measures of digestive efficiency.

The spice is even being explored as a treatment for irritable bowel syndrome (IBS).


This post first appeared on GLITOVINE, please read the originial post: here
People also like
How to Get Rid of Mice – 5 Methods
How to Handle Client Complaints: The 7 Do’s and Don’ts
“The Friend Who May Not Seem a Friend” – The Cat and the Fire, Post 2 of 3
Short Happiness Quotes From Famous and Unknown People
Sex on Your Period – Reasons to Do It
Why the Riddler is such a good villain for The Batman film
ألم المفاصل عند الأطفال