The #EndSARS is a movement calling for the banning of the Special Anti-Robbery Squad, a controversial division known for police oppression in Nigeria.

The campaign has gained the attention of the world with many sports and music stars showing support for the movement on social media.

Osimhen however becomes the latest superstar to back the campaign, when he held up a shirt saying “End Police Brutality In Nigeria ” after scoring his first goal for Napoli, against Atalanta on Saturday. 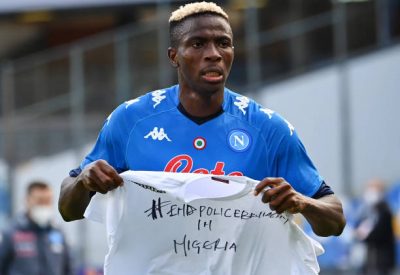 Napoli’s Nigerian forward Victor Osimhen holds up a t-shirt with the inscription ‘End police brutality in Nigeria’ as he celebrates scoring a goal against Atalanta during Italian Serie A football match Napoli vs Atalanta on October 17, 2020 at the San Paolo stadium in Naples. (Photo by alberto pizzoli / AFP) (Photo by ALBERTO PIZZOLI/AFP via Getty Images)

Football writers in Nigeria later took to their respective social media handle to salute the 21-year-old for his courage and patriotism.

See their reactions below:

Respected journalist, Godwin Enakhena said: Here is how Osimhen celebrated after his goal a few minutes ago #EndPoliceBrutality.

Adeniyi Adebanjo: Blessings fall on You Victor. Osimhen scores his first goal for @en_sscnapoli whips this out. #EndSARS

Sulaimon Pooja:  Super Eagles striker, Victor Osimhen scored his first goal for this new club, Napoli & raised this shirt up with #EndPoliceBrutality to send a message home from Italy.

Clearly, he’s the greatest striker ever in Nigeria history. #EndSARS.

Hassan Ruth Odunayo wrote: Osimhen scored his first goal for Napoli and also supported the #EndSARS. This is our own GOAT, maximum respect✊ ”

Aluko Ibukunoluwa also wrote:” Proud of you Victor Osimehn. Na real man you be bro, The Message is loud and clear.”