Commissioned into the 5th battalion of 11 Gorkha Rifles, he has been General Officer Commanding-in-Chief (GOC-C) Southern Command (Pune). He has also served in Counter-Insurgency Operations in Kashmir and Northeast India.

The Defence Ministry had earlier that that it would reveal the name of the new Chief of Dence Staff on December 31, 2019.

However, Uttarakhand Chief Minister, Trivendra Singh Rawat congratulated the Army General on Twitter a day before the official announcement. The tweet has been deleted now. 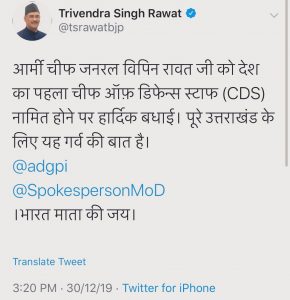 Rawat’s appointment comes after the defence ministry recently amended the army, air force and navy rules by bringing in a new clause that allows the Chief of Defence Staff to serve upto a maximum age of 65 years.

The appointee will also be ranked higher than the chiefs of the Indian Army, the Navy and the Air Force. However, the Chief of Defence will not exercise any military command over the three service chiefs.

Earlier this year in his Independence Day speech, Prime Minister Narendra Modi announced the creation of this post.  “Our forces are India’s pride,” the PM said. “To further sharpen coordination between the forces, I want to announce a major decision from the Red Fort: India will have a chief of defence staff, CDS. This is going to make the forces even more effective.”