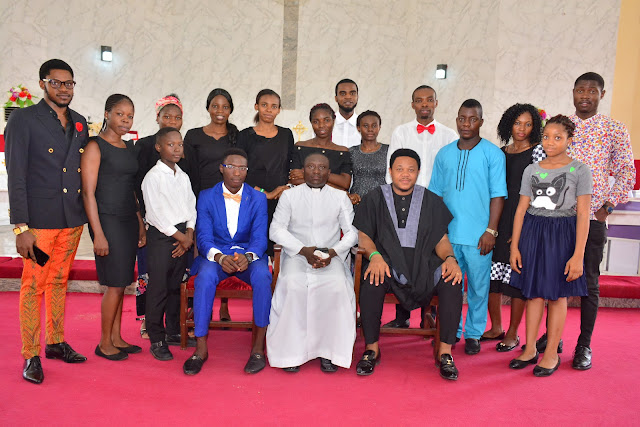 There was a thunderous ovation amidst anointing and miracles in the atmosphere; at St. Andrews Anglican Church, Phase two, Site one, Kubwa, Abuja; during their Drama  Theatre's ministration recently.

Music Profile: Elliott Waits For No O…
What are some of the different method…
“The Friend Who May Not Seem a Friend…
Sexy Games for Married Couples
Podcasting
The groundbreaking drama which was titled "King Igbudu" tells the touching story of a powerful ruler and dictator called King Igbudu (played by Elochukwu Ezeumeanya). The king was extremely powerful and had both religious, political and judicial powers. He subjected all the inhabitants of his Kingdom and beyond to worship and adore him as their god.

And if anyone goes contrary to that, he slaughters such victim or orders the person to be thrown into the lake of fire. He made his palace the supreme court where all cases are resolved; of which he was the judge and perverts justice at will. King Igbudu also had spiritual powers to appear and disappear. He conquered all nations and kingdoms that have ever engaged in battle with him. His power, fame, wealth and influence grew to the extent of making Kings and Queens of other nations, consecrating Priests and Bishops, gifting teachers professorship and more.

People commenced traveling from all the  parts of the world with their problems and heavy laden to seek solution at the feet of this powerful king; such as a man with leprosy (played by Ikechukwu Ogbu) who was healed of his disease with this King's medicine administered by his right hand man and Chief of Amry (played by Greg Ogochukwu) who is the only access to the king and dispenses King's instructions.

The king also clothed a tattered lady (played Blessing Benjamin) who had no clothes with expensive dresses and money.

He declared Operation feed the world from his inexhaustible barn because of a hungry lady (played by Osunlana Oluwafemi) who came to palace in need of food.

There was also a  case of an uneducated lady (played by Adaeze Odogwu) who came in search first degree, he crowned her with degrees up to Ph.D. level.

One day, a barren woman (played by Vivian Amah) came for a child. The king did all he could to give her a child, but all to no avail. He was so furious, palpitating up and down. At the verge of his brags, a loud voice of God (played by Obinna Akalazu) came with wild wind from heaven and bent him into submission.

Immediately, an angel (played by David kings) appeared and gave the barren woman a beautiful baby girl (played by baby Goodness Ibeagha) King Igbudu and his Chief of Army surrendered with rivers of tears to Almighty God who alone can really do all things indeed; Who alone can give and take life. And that was where the curtains drew.

The drama ministration indeed planted a tremendous fear and trembling before the Lord in the atmosphere as cries and applause were heard from the audience. The drama stage was managed by Ifeoluwa Oyesina, while the custumiers were Greg Ogochukwu and Osunlana Omolola. The drama "King Igbudu" was written by Vivian Amah and directed by Obinna Akalazu.
The Thanksgiving Service which had in attendance over 1000 worshippers comes up at the end of the every month as a tradition for the church; and thus the theme of the drama was "God of all Possibilities" drawn from Matthew 19:26 of the Holy Bible.
Other programmes of the Service were a soul lifting sermon by Venerable Barr. Tunde Oyesina, who is the Vicar in charge of the church and Kubwa Anglican Archdeaconry. Plus electrifying praises and worship by a guest artiste; Kelechi Nnam and the St Andrews angelic Choir.
www.colossusgists.com