Police officer, 40 others arrested for dumping refuse on Osun roads 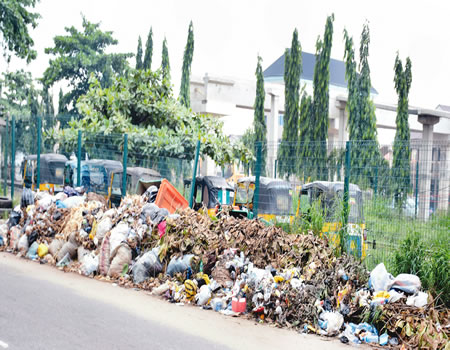 A Police Officer and 40 residents of Osogbo, Osun State capital were on Monday morning arrested by officials of the state Waste Management Agency for allegedly dumping waste on the roads.

Among those apprehended included children and some nursing mothers.

The offenders were said to have been arrested by operatives of Osun Waste Management Agency (OWMA).

OWMA officials had on Monday morning gone round Osogbo metropolis in their truck, apprehending residents caught dropping refuse on road medians and other sides of the road.

The list of those arrested includes one Mr Adebisoye, who identified himself as a police officer, Afsoh Abdulsalam, Abdulsalam Aminat, Adeola Oladeto, Temilade AbduAzeez, Kehinde Abass among others.

Confirming the arrest, the acting General Manager of OWMA, Mr Femi Ogunbamiwo, said that the erring residents were arrested for flouting environmental laws.

He explained that residents of the town had been warned against dumping waste on roadsides and river channels and unapproved ed sites but some of them had remained adamant, adding that the arrested people would be charged to court.

While cautioning residents of the state against violating the state environmental sanitation law, Ogunbamiwo said the state government enacted the laws, to ensure good health and well being of the people.

He said that officers of OWMA had earlier held a meeting with stakeholders, market men and men, security operatives, journalists, local government and LCDA officials, Administrative office representative among others on how to develop a blueprint for the implementation of environmental sanitation in the state.

One of the offenders, Mrs Afusatu Abdulsalam, who felt very remorseful begged the agency for leniency, saying she regretted her action.

Abdulsalam who resides at number 4, Agowande street, Osogbo said for over a month, the officials of OWMA had not come to their area to pick up their refuse and having waiting endlessly without seeing them, she resorted into dumping her refuse on the median of the road.

Police officer, 40 others arrested for dumping refuse on Osun roads